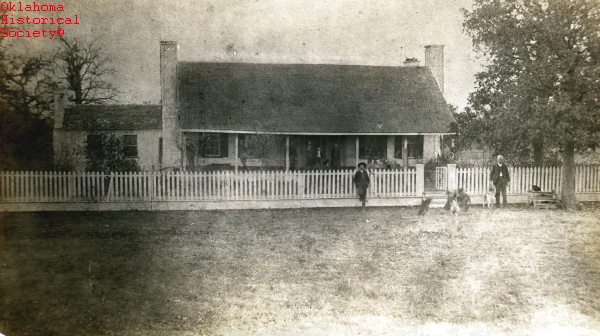 In the late 1840s Plains Indian tribes frequently rode out from their Wichita Mountains strongholds and devastated white settlements in Texas; they also attacked the Southeastern tribes relocated to eastern Indian Territory. Comanche, Kiowa, and Cheyenne raids caused an outcry for protection. U.S. government officials responded in 1850 by ordering the construction of a fort to the north and west of Fort Washita in the Chickasaw Nation, Indian Territory. From that location troops would hopefully keep order among the Plains tribes, thereby stopping the assaults on the Indian Territory nations, on Texans, and on immigrant trains bound for California.

Capt. Randolph B. Marcy of the Fifth Infantry was chosen to select the site and build the post. He decided on a location six miles west and one mile north of present Davis, on a branch of the Washita River called Wildhorse Creek. By summer's end his troops had constructed a rectangular fort with barracks on opposite sides and quartermaster and commissary facilities on opposite ends. Eventually the post had thirty hewn-log buildings with stone chimneys. Marcy named the fort in honor of the late Gen. Matthew Arbuckle.

During the 1850s few soldiers actually served at Fort Arbuckle. Continuing raids by Indians on Texas necessitated their presence in that locale. When Maj. William H. Emory of the First Cavalry arrived in 1858 as commander of Forts Arbuckle and Washita, he found his headquarters post in a poor state. He reported that many buildings were dilapidated, his troops lacked proper clothing, and ordinance stores were almost nonexistent. Surplus ammunition and powder had to be buried to be protected from the weather.

Before he could adequately correct the problems at Fort Arbuckle, however, in late 1859 Emory was directed to build another fort farther northwest. Named Fort Cobb, the new post's purpose was to protect Texas tribes then being relocated to the Leased District in western Indian Territory. For the next two years Emory usually kept more companies at Fort Cobb than Fort Arbuckle. Essentially, Fort Arbuckle's importance stopped with Fort Cobb's establishment.

When the Civil War erupted, Emory decided to withdraw from Indian Territory. On May 3, 1861, Fort Arbuckle's troops evacuated and joined Emory's two other commands marching to Fort Leavenworth, Kansas. Although briefly occupied by Texas Confederates, Fort Arbuckle thereafter played no real part in the war. At the war's end the post was regarrisoned by soldiers from the Sixth Infantry and Tenth Cavalry. In 1868 corn and hay supplies were stockpiled there to support Gen. Philip H. Sheridan's 1868 winter campaign. Many of Sheridan's troops remained at Fort Arbuckle while supplies lasted.

When the feed ran out in spring 1870, the fort was abandoned for good. The recent establishment of Fort Sill had made Fort Arbuckle's existence unnecessary. At the beginning of the twenty-first century all that remained was one chimney wall of a house supposed to have been part of the former fort. No other traces remain except for a small stone marker along State Highway 7.

The following (as per The Chicago Manual of Style, 17th edition) is the preferred citation for articles:
L. David Norris, “Fort Arbuckle,” The Encyclopedia of Oklahoma History and Culture, https://www.okhistory.org/publications/enc/entry.php?entry=FO028.