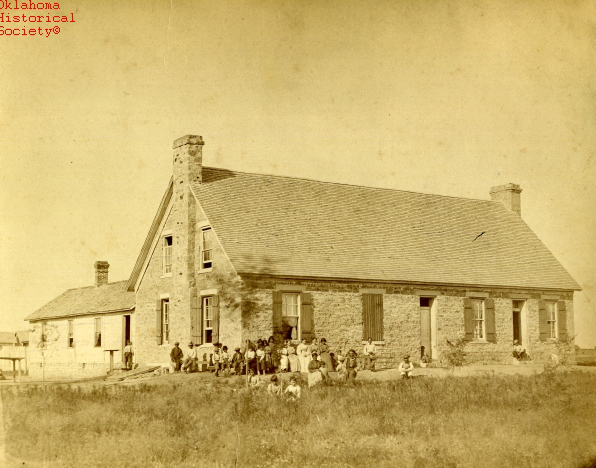 First established as a Quaker boarding school in 1871, the Fort Sill Indian School became a nonsectarian institution in 1891 and remained so until closing in 1980. During its long history the school expanded from one building to thirty. Its enrollment increased from twenty-four in its first year to more than three hundred in the 1970s, and the number of employees on its payroll went from two in 1871 to more than seventy-five a decade later. Because the school was located near Lawton, before World War II Fort Sill's student body was made up largely of Indians from western Oklahoma—Comanche, Apache, Caddo, Kiowa, Delaware, and Wichita. This changed dramatically in the postwar era, however, as Navajo from New Mexico and Arizona began to be admitted. Within a few years they comprised 80 percent of the student population. The influx of out-of-state Native students gradually declined, and by 1970 more than two hundred of the school's three hundred pupils hailed from Oklahoma. Until the 1950s the curriculum for males consisted of vocational and agricultural training, and females received instruction in homemaking. Thereafter, Fort Sill emphasized more of an academic curriculum, although vocational trades remained important.

Students who attended Fort Sill came away from the boarding school with impressions that ranged from downright hatred of the school to enduring fondness for it. For some, the strict discipline and harsh punishment meted out at the institution made it feel more like a prison than a place of learning. Being away from family and tribal communities made the experience even more alienating. Others, however, enjoyed their time there, making lifelong friends, participating in extracurricular activities, and remaining Indian despite attempts by the government's educational machinery to grind it out of them.

Gina Quoetone Pauahty, an alumnus, recalled that the students were punished for speaking their Native languages but often found creative ways to get around this restriction, with varying degrees of success: "I'm Kiowa, and so to keep from getting into trouble I talk[ed] Comanche. Then I got punished anyway, but I didn't know the difference of why I got punished. I got punished for talking Indian, and I'd talk Comanche before I'd talk Kiowa. All the time I thought if I talk Comanche I'd stay out of trouble." Hume Fuller, who attended Fort Sill before World War I, found enjoyment on the gridiron despite the brutality of the sport of football: "Your helmet was . . . thin," he explained, "[j]ust a little old leather deal over our ears so they wouldn't peel your ears off, was all it was." With determination, strength of character, and often with humor, students made Fort Sill an indigenous institution all their own. This was made clear in the late 1970s when Native students and administrators, alumni, and Indian leaders fought tenaciously to keep the school alive when the BIA announced its imminent closure. Although the coalition kept the school open for several years beyond its originally planned closing date, it could not save it from shutting down permanently in 1980.

The following (as per The Chicago Manual of Style, 17th edition) is the preferred citation for articles:
Josh Clough, “Fort Sill Indian School,” The Encyclopedia of Oklahoma History and Culture, https://www.okhistory.org/publications/enc/entry?entry=FO039.