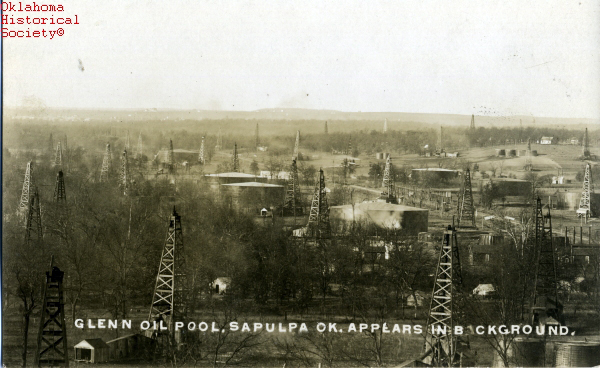 As Oklahoma's first major oil play, Glenn Pool had an important role in the development of the oil industry of the state. It attracted the first major pipelines necessary to marketing Oklahoma petroleum and brought significant investment capital to the state. Moreover, it firmly established Tulsa as the foremost oil city in Oklahoma.

Robert Galbreath, who had been involved in the Red Fork boom, began looking for other oil prospects in that same area in summer 1901. In July he located a likely location on the Ida E. Glenn farm, about twelve miles south of Tulsa and four miles southeast of Sapulpa, but delayed leasing until legal restrictions on Indian allotments had eased. He and Frank Chesley spudded in on the Ida E. Glenn Number One in autumn 1905. On November 22 the well was completed at a depth of 1,481 feet in the Glenn sand formation (later called the Bartlesville sand) for a production of seventy-five to eighty-five barrels per day. The well was drilled in the utmost secrecy in an effort to avoid the type of chaos that had followed the Red Fork discovery a few years earlier. Unfortunately, several oilmen were operating in the area at the same time, and their activity, coupled with federal government regulations requiring drilling on Indian allotments within ninety days of signing a lease, soon created the first gigantic oil boom in Oklahoma history.

By summer 1906 the field was formally named at a meeting held in Sapulpa. Meanwhile, fifty to one hundred wells being drilled simultaneously produced a massive production problem. Inadequate storage caused much of the oil to be held in large earthen pits, which often overflowed to spill oil across the countryside. Due to this overproduction oil from the early days seldom sold for more than forty cents per barrel and often went for as low as twenty-five cents at a time when production costs averaged thirty cents per barrel. The field grew from eighty acres to eight thousand acres during the first year and ultimately became roughly four miles long and two miles wide. Flush production between 1906 and 1908 ranged from eighteen to twenty million barrels per year before gas depletion, caused by massive venting, decreased the gas pressure. Therefore, the wells ceased flowing and had to be put on a pumping basis. With 43,520,000 barrels in 1907, the Glenn Pool's production propelled Oklahoma into the nation's leading oil producer, a distinction the state held until 1928. All this waste began to come under control in 1907 and 1908 as the Prairie Oil and Gas Company, the Gulf Oil Company, and the Texas Company all built large pipelines to the field to ship the production to market.

A number of prominent oil figures, including Harry Ford Sinclair, who later founded the Sinclair Oil and Refining Company, and J. Paul Getty of Getty Oil Company fame, received their initial start during the Glenn Pool boom. Oklahoma Natural Gas Company was founded and in 1907 built a pipeline from the Glenn Pool to provide gas service to Oklahoma City. Oklahoma's first major oil-boom towns developed in association with the field. Almost immediately Sapulpa grew from fewer than a thousand souls to more than eight thousand. At the height of the boom more than thirty trains per day stopped there, and an interurban rail service offered immediate access to the field. Keifer, with its infamous Bowery section, had the field's worst reputation. The town was established during the boom as terminus to the Gulf pipeline and afterward went into a major decline until becoming a suburb to Tulsa in the 1980s. Mounds grew by leaps and bounds, and Jenks was founded in 1905 as terminus for the Texas Company pipeline. Glenpool, established in the fall of 1906, remained an active town for the rest of the century, but others such as Sabo, did not survive the boom. Taneha, later Bowden, existed from 1909 until 1957.

The following (as per The Chicago Manual of Style, 17th edition) is the preferred citation for articles:
Bobby D. Weaver, “Glenn Pool Field,” The Encyclopedia of Oklahoma History and Culture, https://www.okhistory.org/publications/enc/entry.php?entry=GL007.