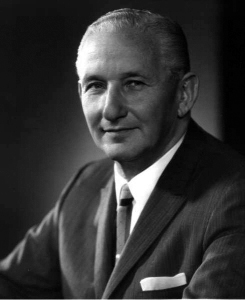 Inventor of the supermarket shopping cart, Sylvan Nathan "Syl" Goldman was born to Hortense and Michael Goldman on November 15, 1898, in Ardmore, Chickasaw Nation. During his youth, while attending Ardmore public schools, Sylvan worked at the dry goods store that his father and uncle owned.

After World War I, in which he served as a food requisitionist in France, he and older brother Alfred opened Goldman Brother's Wholesale Fruits and Produce in Breckenridge, Texas. Years later, while living in California, Sylvan and Alfred were intrigued by a new type of grocery store that offered all products under one roof—the supermarket. The brothers returned to Oklahoma in order to bring this new way of shopping to their home state. With Sylvan serving as president and Alfred as vice president of Sun Grocery Company, they opened a store on April 3, 1920, at 1403 East Fifteenth Street in Tulsa, Oklahoma. One year later there were twenty-one Sun Grocery markets throughout the state. In 1929 Sylvan and Alfred sold the Sun chain to Skaggs-Safeway Stores, and in 1934 Sylvan purchased the faltering Humpty-Dumpty grocery chain. The chain was revived in part due to Goldman's revolutionary advertising and enlightened personnel policies. His greatest contribution was the shopping cart, invented in 1936 and patented by Goldman. He established the Folding Basket Carrier Company to manufacture his invention. It was just the beginning of a list of creations that revolutionized the grocery industry: the grocery sacker, the folding interoffice basket carrier, and the handy milk bottle rack.

On June 7, 1931, Goldman married Margaret "Babe" Katz of Stillwater, Oklahoma; they had two sons, Monte and Alfred. The elder Goldman served as president of the Super Market Institute and vice president of the National Association of Food Chains. He was a patron of the arts and contributed many works of art to Oklahoma institutions. He gave time and money to the National Conference of Christians and Jews at the Southwest Center for Human Relations at the University of Oklahoma. He received many honors, including honorary chief of the Pawnee Indian Tribe (1950), the Eleanor Roosevelt Humanities Award (1965), a Distinguished Service Citation from the University of Oklahoma (1971), induction into the Oklahoma Hall of Fame (1971), and an honorary doctorate from Oklahoma City University (1974). In January 1983 the Oklahoma Blood Institute moved to the Sylvan N. Goldman Center, located at 1001 North Lincoln Boulevard and named for Goldman, who donated $1.5 million for the center.

Retiring from the grocery industry, Goldman turned his attentions to real estate development and savings and loan institutions scattered from Hawaii to Puerto Rico. One week after the death of his wife of fifty-three years Sylvan Goldman died at his Oklahoma City home on November 26, 1984.

Terry P. Wilson, The Cart That Changed the World: The Career of Sylvan N. Goldman (Norman: University of Oklahoma Press, 1978).

The following (as per The Chicago Manual of Style, 17th edition) is the preferred citation for articles:
Julia Ann Pledger Daugherty, “Goldman, Sylvan Nathan,” The Encyclopedia of Oklahoma History and Culture, https://www.okhistory.org/publications/enc/entry.php?entry=GO004.