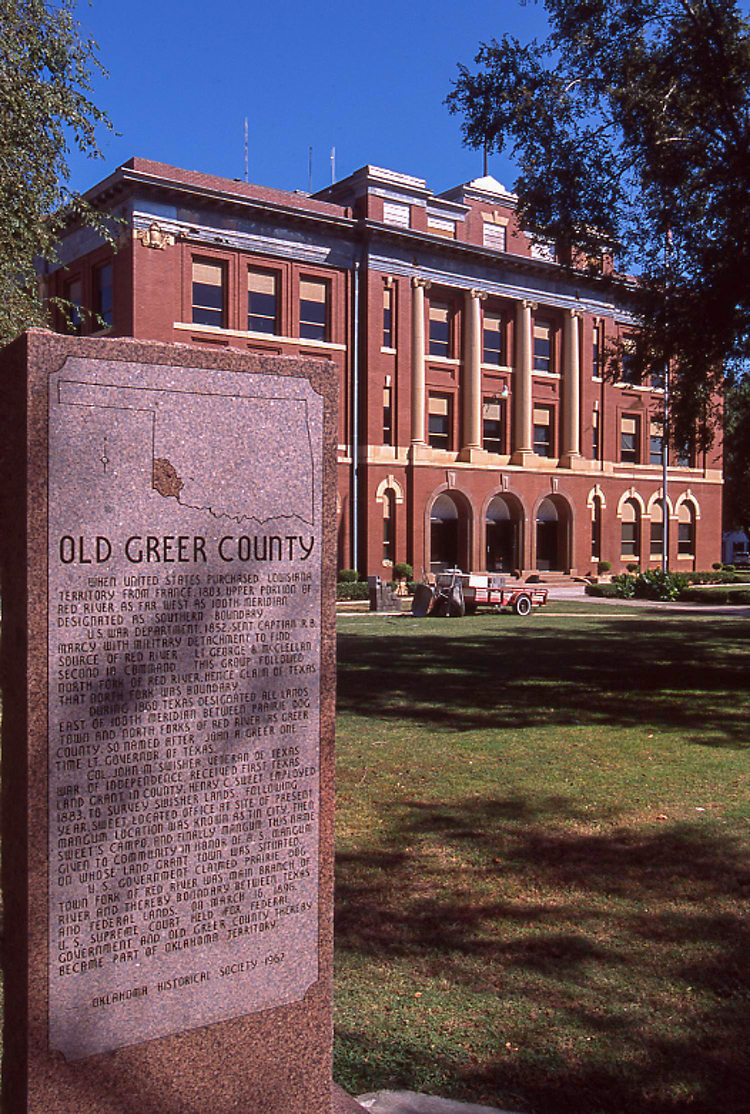 Greer County's prehistory is represented by ninety-six known archaeological sites reported in a 1981 survey. Through artifacts found at several sites scientists believe that sedentary farmers lived along the forks of the Red River between A.D. 800 and 1400. The Taylor Site yielded clues that bison-hunting, semisedentary people inhabited the area after A.D. 1400. It is speculated that this site represents a sixteenth-century trading center inhabited by Southern Plains tribes such as the Apache and Wichita. In the 1600s and 1700s Spaniards passed through the eastern edge of future Greer County as they used the Great Spanish Road, which paralleled the North Fork of the Red River. When this area became part of the Louisiana Purchase in 1803, explorers traversed the region. One of them was Randolph B. Marcy, who traveled west from Fort Arbuckle and followed the North Fork of the Red River in 1852.

From 1860 to 1896 Greer County was part of Texas. On March 16, 1896, a U.S. Supreme Court decision made Old Greer County part of Oklahoma Territory. In the 1860s and 1870s the Kiowa and Comanche used the area as a hunting ground. In the 1880s the Day Land and Cattle Company of Texas established a large ranching presence in the area of Greer County. Jim Haney, Ed Handy, John Powers, and Mat Murphy had a herd of approximately fifteen to twenty thousand head on open range in western Greer County in the early 1880s. W. S. Ikard and E. B. Harrold established the Ikard and Harrold Ranch, with their headquarters near present Granite. They had between sixty and seventy thousand cattle. Representative of a small rancher, David C. Jester built a two-room, frame ranch house circa 1890 on his land in northwestern Greer County. He had three hundred cattle on five sections of land. The former community of Jester was named in his honor.

Mangum has been the county seat since 1886, a time when Greer County was situated in Texas. In 1896, when Greer County became part of Oklahoma Territory, county officials rented space in several buildings. In 1901 a fire in one of those structures destroyed some county records. At that time the county commissioners considered building a courthouse. Designed by architect Solomon A. Layton, the facility was completed in 1906. The Greer County Courthouse is listed in the National Register of Historic Places (NR 85000682).

A few other industries have supplemented the economy. For example, quarrying at Quartz Mountain near Granite created two companies in that town by the 1930s. Also at that time a mattress factory existed in Mangum. By the mid-1940s Mangum also had a brick and tile company and a cotton compress. At the turn of the twenty-first century Greer County reported two manufacturers. Since 1910 the Oklahoma State Reformatory, a medium-security institution in Granite, has provided employment.

In addition, Works Progress Administration (WPA) projects during the 1930s helped employ Greer County residents. The H. E. Curtis farm near Mangum benefited from a shelterbelt planted in 1935, the first shelterbelt made possible by the U.S. Forest Service through WPA funding. Two other WPA projects involved the construction of the Mangum National Guard Armory (NR 94000278) and the Mangum Community Building (NR 95000236), which are listed in the National Register of Historic Places.

Early-day pioneers supported their children's educational needs. Students first received an education in primitive dugouts, progressing to wood-frame and brick school buildings with prosperous times. Supposedly, the first school in Greer County was a subscription school taught by John R. Nigh in a dugout near Mangum. He had thirteen pupils in the fall 1887. In 1912 the Baptist General Convention of Oklahoma moved their Southwest Baptist College from Hastings, Oklahoma, to Mangum. The institution reopened in Mangum as a junior college and served the area until it closed in 1915.

In 2010 the incorporated towns included Mangum (the county seat), Granite, and Willow. Brinkman, Reed, and Russell represent ghost towns. Located seven miles north of Mangum, Brinkman had a post office from 1910 to 1965. It reached its economic high point in the mid-1920s as a trade center for wheat and cotton. Brinkman met its demise gradually as a result of the Great Depression of the 1930s and the abandonment of the railroad in 1972. When State Highway 34 was being constructed in 1953, it bypassed Brinkman. Reed and Russell also ceased to exist as a result of population shifts during the Great Depression and after World War II.

Early travel routes followed the waterways and American Indian trails. The Spaniards used the Great Spanish Road in the seventeenth and eighteenth centuries. The Camp Supply Road, connecting Camp Supply (later Fort Supply) in present northwestern Oklahoma with the Red River, traversed through Greer County. Cattle drives from Texas used the Western Trail, which passed into Indian Territory at Doan's Crossing and followed the eastern boundary of present Greer County on its way north to Dodge City, Kansas. In 1900 the Chicago, Rock Island and Pacific Railway connected Mangum and Granite with outside markets. Ten years later the Wichita Falls and Northwestern Railway (later the Missouri, Kansas and Texas Railway) passed through Mangum and Willow. Motorists used U.S. Highway 283 and State Highways 6, 9, and 34. A municipal airport was located near Mangum.

The following (as per The Chicago Manual of Style, 17th edition) is the preferred citation for articles:
Linda D. Wilson, “Greer County,” The Encyclopedia of Oklahoma History and Culture, https://www.okhistory.org/publications/enc/entry?entry=GR025.