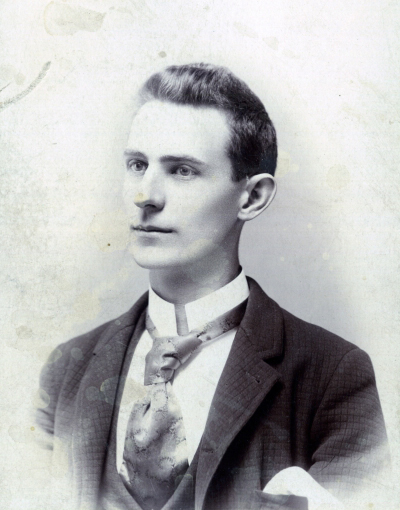 Newspaper editor Frank H. Greer established one of the first newspapers in Oklahoma Territory. Born on July 21, 1862, at Leavenworth, Kansas, Greer was one of six children of Samuel W. and Clothilda Hilton Greer. Samuel Greer served as the superintendent of Leavenworth schools and as Kansas territorial superintendent of public instruction. When he died in 1880, Mrs. Greer moved her children to Winfield, Kansas, where her eldest son owned the Winfield Courier newspaper. Ambitious Frank Greer soon worked for his brother and desired to have his own newspaper. With inside information from Santa Fe Railway executives who knew where towns would be established along the railroad line, he planned to open a newspaper at the future site of Guthrie, Oklahoma Territory (O.T.).

Recently married to Blanche Byers, young Greer struck out on his own. With twenty-nine dollars to start his business, he concealed himself in a freight car of telephone poles that arrived in the Unassigned Lands of Oklahoma Territory a day before the opening, thus becoming a "sooner." He jumped off the train and hid in the woods, and at ten minutes after noon on April 22, 1889, he staked his claim.

Greer immediately established the Daily State Capital. Before his printing press arrived in Guthrie, the paper's first issues were printed in Winfield, Kansas. The paper soon propagandized Guthrie's good qualities to encourage outside investment for development of the town as the territorial capital. Despite his own questionable entry into O.T., his paper criticized others who made illegal land claims. As the organ for the dominant Republican Party during the Territorial Era, the Daily State Capital had competition from Leslie Niblack's Guthrie Daily Leader, which supported the Democratic Party. When the Democratic-controlled Constitutional Convention met in Guthrie in 1906, Greer lost substantial revenue when convention leaders named Niblack as their official printer. However, Greer's newspaper remained the prominent newspaper until the state capital was moved from Guthrie to Oklahoma City in June 1910. Afterward, E. K. Gaylord's Daily Oklahoman became the dominant newspaper.

Greer also did commercial printing and book binding at his printing plant. He edited the weekly Oklahoma Farmer, published in Guthrie from 1890 to 1907. In 1892 he was elected to the Territorial Legislature, serving on the Labor, Manufactories, and Home Industry committees. Involved in the organization of the Oklahoma Historical Society, he served on the board of directors from 1896 to 1906. As one of the founders of the Oklahoma Territorial Press Association, he was president from 1904 to 1905.

Greer's first wife had died in 1906, and in 1911 he moved to Tulsa. There he married Laura Leigh Hanson. Before his death in Tulsa on August 8, 1933, Frank Greer was an active community leader and worked in real estate and oil investments. He was solicitor for the Fourth Liberty Loan Campaign in Tulsa during World War I, was active in several fraternal organizations, and was a member of the Episcopal Church.

Valerie J. Grant, "The Editor and the Magic City: Frank H. Greer and the Beginnings of Guthrie, Oklahoma Territory," The Chronicles of Oklahoma 58 (Spring 1980).

The following (as per The Chicago Manual of Style, 17th edition) is the preferred citation for articles:
Linda D. Wilson, “Greer, Frank Hilton,” The Encyclopedia of Oklahoma History and Culture, https://www.okhistory.org/publications/enc/entry.php?entry=GR026.