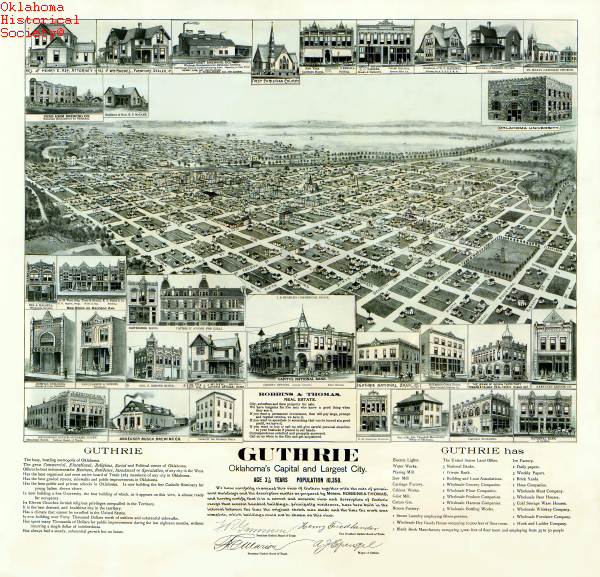 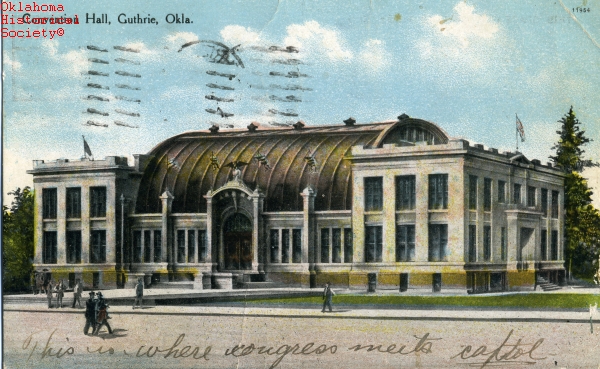 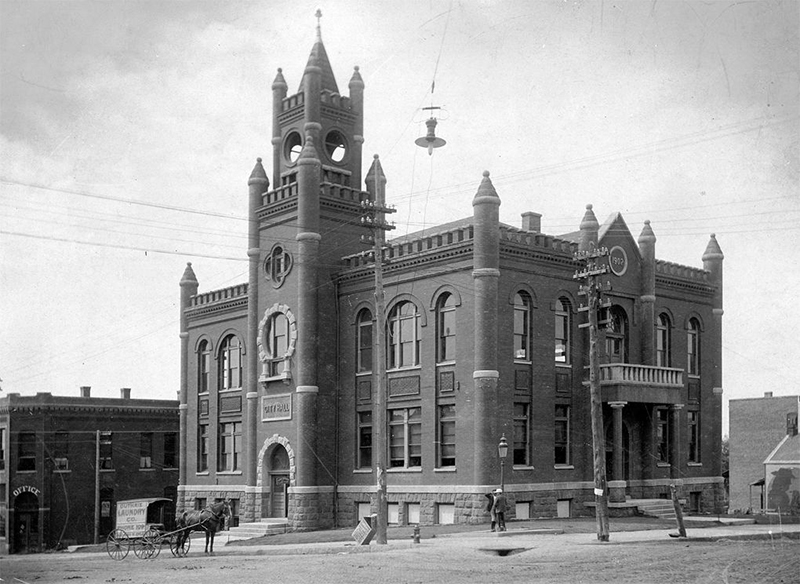 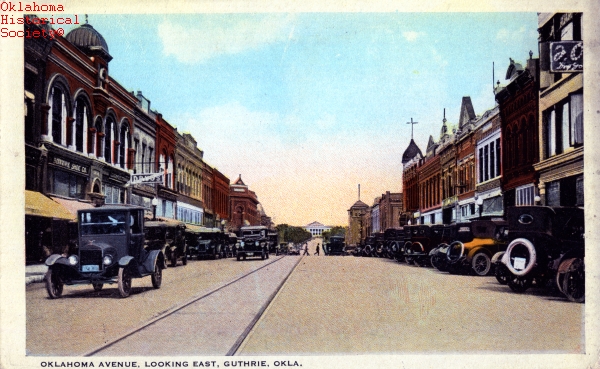 Located in Logan County, Guthrie is situated on U.S. Highway 77, thirty-two miles north of Oklahoma City. On March 23, 1889, Pres. Benjamin Harrison signed a proclamation opening the Unassigned Lands in Indian Territory on April 22, 1889, to non-Indian settlers. Guthrie and other towns sprang into existence on that day when approximately fifty thousand participants of the Land Run of 1889 staked their claims on the open prairie. Prior to the land opening the Southern Kansas Railway (later the Atchison, Topeka and Santa Fe Railway, AT&SF) built a north-south line from the Kansas-Oklahoma border to Purcell, Indian Territory, in 1886–87. Along that line a railroad station known as Deer Creek, at the present location of Guthrie, was established in March 1887. Some land run participants came by train from Arkansas City, Kansas, to Guthrie. The town's name honored Kansas jurist John Guthrie. A post office was established on April 4, 1889, and a U.S. Land Office opened on April 22, 1889.

The 1889 proclamation specified that townsites could encompass 320 acres. Because a large number of contestants wanted town lots, four towns were established. Guthrie, East Guthrie, West Guthrie, and Capital Hill each elected a mayor and established ordinances. From 1889 to 1890 U.S. Army troops stationed at Camp Guthrie kept peace and order. Like other towns in Oklahoma Territory, the four Guthrie towns were served by provisional governments until the Organic Act was passed on May 2, 1890. After that, Pres. Benjamin Harrison appointed George W. Steele, a Republican from Indiana, as the first territorial governor, and Guthrie was designated the territorial capital until 1913. Consolidation of the four towns occurred in the summer 1890. Serving as the county seat of Logan County and the territorial capital, Guthrie rapidly grew. Its first census, taken in 1890, indicated that it had 5,333 residents. That year citizens supported eight newspapers, nine churches, and eleven schools. Ten years later the population had almost doubled to 10,006.

Guthrie served as the state capital from 1907 to 1910. Pres. Theodore Roosevelt signed the Oklahoma Enabling Act on June 16, 1906, which provided for creating the State of Oklahoma and writing the state constitution. On November 20, 1906, 112 delegates met in City Hall at Guthrie to draft the constitution. A year later on November 16, 1907, statehood ceremonies were held on the steps of Guthrie's Carnegie Library. The Logan County Courthouse (listed in the National Register of Historic Places, NR 84003141) was erected in 1907. Rivalry between Oklahoma City and Guthrie for the capital culminated on June 11, 1910, when a majority of the people voted to move the state capital to Oklahoma City.

Centrally located in Logan County, Guthrie became a prominent trade center and hub for rail service. A flurry of railroad construction occurred in the early 1900s. Between 1900 and 1902 the Eastern Oklahoma Railway (later the AT&SF) constructed a line from Guthrie east to Cushing. In 1902 the Denver, Enid and Gulf Railroad (later the AT&SF) built a line connecting Guthrie and Enid to the northwest. By 1903 the Choctaw, Oklahoma and Western Railroad (later the Chicago, Rock Island and Pacific Railway) joined Guthrie and Chandler. The Missouri, Kansas and Oklahoma Railroad (later the Missouri, Kansas and Texas Railway) operated between Guthrie and Fallis from 1904 to 1918. The St. Louis, El Reno and Western Railway furnished service between Guthrie and El Reno from 1904 to 1924. Between 1916 and 1944 the Oklahoma Railway Company operated an interurban connecting Guthrie with Oklahoma City and Norman to the south.

One year after 1907 statehood Guthrie had thirty-nine factories, including a cotton mill, a cotton oil mill, a creamery, and a flour mill. It had eight wholesalers, 286 retailers, and five banks. By 1931 the cotton mill employed 175, and a carpet factory employed twenty-five. As an agricultural and industrial center, Guthrie exported approximately two thousand car loads of livestock, fruit, grain, and textiles that year. Around 1948 the Oklahoma Factory Manufacturing Company moved from Oklahoma City to Guthrie. Furrow and Company greenhouses represents one of Guthrie's prosperous family-owned businesses, begun in 1892 by Elijah and Elizabeth Furrow. The facility expanded to three hundred thousand square feet by the late 1970s.

Although subscription schools offered education early on, Guthrie citizens were prompt to open public schools in the fall 1889. Separate schools for African American students such as the Lincoln School, the Douglass School, and the Favor High School were established. In 1901 the Oklahoma Territorial Legislature passed a law that allowed any county with a population of at least six thousand and with the approving vote of qualified electors to build and operate a county high school. The Logan County High School operated between 1903 and 1911. It closed after other high schools were organized in county communities.

Several institutions of higher education existed in early-day Guthrie. The short-lived Oklahoma University opened on September 12, 1892, and ambitiously offered kindergarten through high school classes as well as degrees in liberal arts and sciences, business courses, a normal school for teachers, and professional programs in law, pharmacy, dentistry, and medicine. Three Benedictine Sisters came from Creston, Iowa, to Guthrie and established a girls' school known as St. Joseph's Academy in 1892. The St. Joseph Convent and Academy (NR 79002000) is listed in the National Register of Historic Places. In September 1911 the new Methodist University of Oklahoma was opened. Due to declining enrollment during World War I and the 1918 influenza epidemic the institution closed in 1919 and was relocated to Oklahoma City, and it later became Oklahoma City University. The Benedictine Heights College/Catholic College of Oklahoma for Women operated in Guthrie from 1916 to 1955, and then it moved to Tulsa.

The Guthrie Historic District was added to the National Register of Historic Places (NR 74001664) in 1974 and became a National Historic Landmark in 1999. Other National Register listings include the Carnegie Library (NR 71000666), the Cooperative Publishing Company Building (NR 73001564), the National Guard Armory (NR 94001083), and the Scottish Rite Temple (NR 87000503). Known for its Gothic style structures designed by architect Joseph Foucart, Guthrie offers visitors several annual events such as the 89er Day celebration in April, the Guthrie Jazz Banjo Festival held on Memorial Day weekend, and the Territorial Christmas celebration. In addition to the territorial governors, prominent early residents included territorial delegate Dennis T. Flynn, attorney Henry Asp, and newspaper editor Frank Greer. Carry Nation lived briefly in Guthrie, and while there she published The Hatchet and agitated for constitutional prohibition as the Twin Territories prepared for statehood.

The following (as per The Chicago Manual of Style, 17th edition) is the preferred citation for articles:
Linda D. Wilson, “Guthrie,” The Encyclopedia of Oklahoma History and Culture, https://www.okhistory.org/publications/enc/entry.php?entry=GU003.