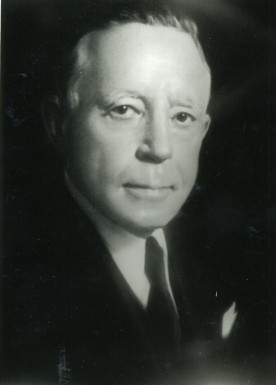 The founder of the Halliburton Company, a worldwide oil-field services and products company, Erle Palmer Halliburton was a pioneer in oil-well cementing. He was born to Edwin Graves and Lou Cothran Halliburton on a farm near Henning, Tennessee, on September 22, 1892. After his father died, Erle Halliburton found himself in the position of helping support his mother, sister, and four brothers. At age fourteen he left home to work at various jobs. He joined the U.S. Navy in 1910.

Honorably discharged from service in 1915, Halliburton found work with Almond A. Perkins of the Perkins Oil Well Cementing Company in the California oil fields. Halliburton's constant suggestions for improving Perkins's oil-well cementing process were most unwelcome and eventually led to his being fired. Halliburton was often quoted as saying that "the two best things that ever happened to me were being hired, and fired, by the Perkins Oil Well Cementing Company."

Shortly thereafter, Halliburton and his wife, Vida Tabor Halliburton, moved to Burkburnett, Texas, in the Mid-Continent Region. There he introduced oil-well cementing to the drillers in that oil district, hoping to make a name for himself in the industry. While he tried to convince drillers that his oil-well cementing process was a valuable service, Halliburton and Vida worked tirelessly with borrowed equipment and little or no operating cash, at one point having to pawn Vida's wedding rings to pay the hired help. To sustain the business Vida hand washed the cement sacks used in the cementing process so they could be resold to the cement companies. Halliburton's big break came when Skelly Oil Company hired him to control a wild well in the Hewitt-Wilson Field in south-central Oklahoma. This gave him a chance to prove his services. In 1919 he founded his own company, which became Halliburton Oil Well Cementing Company in 1920, headquartered in Wilson, Oklahoma. Soon the "new and improved method" of oil-well cementing was becoming a household name throughout Oklahoma and Texas.

Erle Halliburton was granted thirty-eight patents for oil-field services and tools and several miscellaneous inventions, making Halliburton Oil Well Cementing Company's Duncan operations centers a mainstay in the Oklahoma economy for more than half a century. He died on October 13, 1957, in Los Angeles, California. His legacy included his five children: Erle P., Jr., David, Zola Catherine, Vida Jessie, and Ruth Lou. Posthumously he was inducted into the Oklahoma Hall of Fame (1957) and the Permian Basin Petroleum Museum Hall of Fame (1983). He was also named to the Oklahoma Aviation Hall of Fame (1993) for innovations in the aviation industry.

The following (as per The Chicago Manual of Style, 17th edition) is the preferred citation for articles:
Sheri Hoeksema Harris, “Halliburton, Erle Palmer,” The Encyclopedia of Oklahoma History and Culture, https://www.okhistory.org/publications/enc/entry.php?entry=HA012.