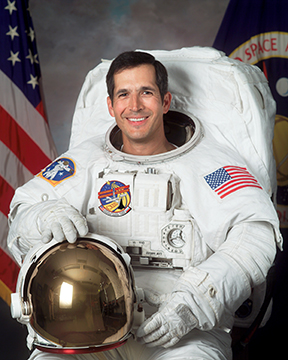 Former NASA astronaut and U.S. Navy officer John Bennett Herrington, of Chickasaw heritage, was born on September 14, 1958, in Wetumka, Oklahoma. His parents are James E. and Joyce Herrington, Sr. While the younger Herrington was growing up his family lived in Colorado, Wyoming, and Texas. Herrington graduated from Plano (Texas) Senior High School in 1976. In 1983 he received a bachelor's degree in applied mathematics from the University of Colorado. Herrington completed a master's degree in aeronautical engineering from the U.S. Naval Postgraduate School in 1995. John Herrington married Debra Ann Farmer, with whom he had two daughters.

Before being accepted as an astronaut at the Johnson Space Center, Houston, Texas, in 1996, Herrington was commissioned as an ensign in the U.S. Navy in 1984 at the Naval Air Station in Pensacola, Florida. The following year he was designated a naval aviator and reported to Moffett Field Naval Air Station in California. There he transitioned from student to patrol plane commander and instructor pilot. In 1990 Herrington attended the U.S. Navy Test Pilot School in Maryland. After graduation he was a test pilot at the U.S. Navy Force Warfare Aircraft Test Directorate from 1991 to 1993. He has flown various aircraft, including the P-3 Orion, the T-34C, and the de Havilland Dash 7.

In 1996 NASA selected John Herrington as an astronaut. After two years of training and evaluation he received an assignment as a mission specialist. He traveled to the International Space Station in the space shuttle STS-113 Endeavour, launched on November 23, 2002, from Kennedy Space Center. The mission accomplished the delivery of a new crew to the space station, the delivery and installation of the P1 Truss, a transfer of cargo, and the return of the former space station crew. Herrington accomplished three space walks totaling nineteen hours and fifty-five minutes. As an enrolled member of the Chickasaw Nation, NASA considers Herrington as the first American Indian astronaut to accomplish space travel and a space walk. On his journey to the International Space Station he carried eagle feathers, arrowheads, wooden flutes, and flags of the Chickasaw and Crow nations. The Endeavour returned to Kennedy Space Center on December 7, 2002. In July 2004 Herrington served as the commander of NEEMO 6 (NASA Extreme Environment Mission Operations), an underwater laboratory known as Aquarius, which is used to study human survival techniques in preparation for additional space exploration.

In 2005 Herrington left NASA and retired from the U.S. Navy. That year he was hired by Rocketplane Global, an Oklahoma City–based company. In December 2007 he decided to leave the company in order to do public speaking engagements and to work with the Chickasaw Nation. In 2008 Herrington made a cross-country bicycle trip. During his excursion he met Margo Aragon, whom he married in 2009 in Joseph, Oregon. They live in Lewiston, Idaho, where in 2013 he was working on a doctorate degree in education at the University of Idaho. He has received many accolades, including being inducted into the Chickasaw Nation Hall of Fame in 2002 and the Oklahoma Aviation and Space Hall of Fame in 2007.

The following (as per The Chicago Manual of Style, 17th edition) is the preferred citation for articles:
Linda D. Wilson, “Herrington, John Bennett,” The Encyclopedia of Oklahoma History and Culture, https://www.okhistory.org/publications/enc/entry.php?entry=HE024.