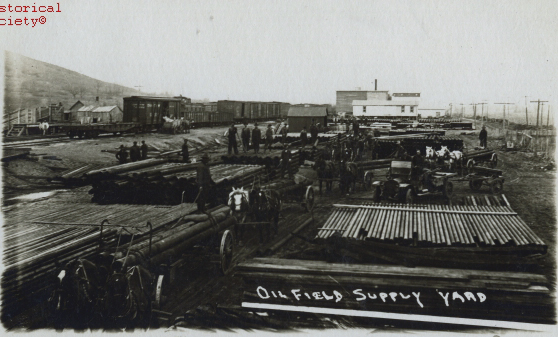 The Osage County community of Hominy lies at the intersection of State Highways 20 and 99, twenty-one miles south of Pawhuska. Hominy originated following the removal of the Osage Indians from Kansas during the early 1870s. According to Osage historian John Joseph Mathews, the Upland-Forest-People, one of the tribe's five physical divisions, encamped along a creek in the south-central part of their new reservation. They named the stream for tribal leader Ho'n-Mo'n-I'n (pronounced "Hominy" by whites) or Walks in the Night. The federal government established an Osage subagency on Hominy Creek circa 1874. The facility was relocated four miles south in 1886.

In December 1887 John M. Hale and Jacob H. Phillips were licensed to trade with the Osage. Their store, called Hominy Post, was located near the subagency. A settlement developed there, and a post office with the Hominy designation opened in February 1891. The Missouri, Kansas and Oklahoma Railroad reached the community in 1903. Later acquired by the Missouri, Kansas and Texas Railway, the line was abandoned in 1977. The Hominy News, the town's earliest newspaper, started in 1905. The 160-acre townsite (and the adjoining 160-acre Hominy Indian Village reserve) was exempted from Osage allotment. Surveyed and platted lots were auctioned in June 1906. Hominy had a population of 468 in 1907 and incorporated in 1908. Its economy centered on farming, ranching, and the petroleum industry. Agricultural commodities included cattle, hogs, cotton, and corn. The Hominy Oil Field was discovered in 1916. Nine local fields remained productive into the twenty-first century.

Hominy's population grew from 760 in 1910 to 2,875 in 1920. The Hominy Indians professional football team was organized in 1925. The all-Indian squad defeated the National Football League champion New York Giants in 1927 and disbanded after the 1932 season. During the Great Depression Hominy's population dropped from 3,485 in 1930 to 3,267 in 1940. A cotton oil and ice company, a hatchery and poultry farm, and three stockyards were active in 1936. The Works Progress Administration built a National Guard Armory in 1937.

The following (as per The Chicago Manual of Style, 17th edition) is the preferred citation for articles:
Jon D. May, “Hominy,” The Encyclopedia of Oklahoma History and Culture, https://www.okhistory.org/publications/enc/entry?entry=HO024.