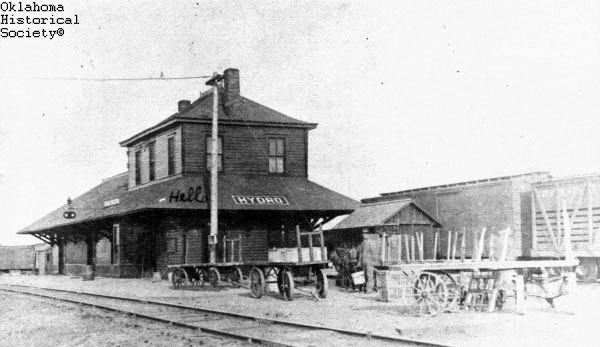 The Caddo County town of Hydro is situated on State Highway 58, just north of Interstate 40/U.S. Highway 66, eight miles east of Weatherford, and sixty-three miles west of Oklahoma City. Extreme north Hydro lies within Blaine County. The town was founded on August 6, 1901, when the Wichita and Caddo Reservation opened for settlement. Built near the Choctaw, Oklahoma and Gulf Railroad, the settlement was originally called Caddo, but when the post office was established in September 1901, the name was changed to Hydro to honor the town's plentiful well water. Agricultural development, especially corn and cotton, was impressive. Also noted for its livestock, Hydro was a shipping point for cattle, hogs, sheep, horses, and mules.

The Hydro Review, Caddo County's first newspaper, debuted in 1901 as the Caddo County Review. The county's first school opened at Hydro in 1901, and there have been twelve area churches. The first Hydro Free Fair was held in September 1904. Originally called the Hydro Harvest Festival, it is reportedly Oklahoma's longest running "free fair." During the Great Depression the Works Progress Administration paved Hydro's streets and built the present schoolhouse and community center. The area's youth have served in every conflict from World War I to Operation Desert Storm.

In 1941 Carl and Lucille Arthurs Hamons opened the Hamons Courts and Lucille's Gas Station south of Hydro on U.S. Highway 66. The construction of Interstate 40 in 1966 resulted in the demise of businesses along Route 66, but Lucille, "the Mother of the Mother Road," persevered. In 1997 Lucille's (the Provine Service Station) was listed in the National Register of Historic Places (NR 97000803). The Hamons Tourist Court sign has been displayed at the Smithsonian Institution in Washington, D.C.

The community's population increased from 524 in 1907 to 948 in 1930. The Great Depression and the Dust Bowl took their toll, however, and the population declined. An oil boom in the 1980s brought residents back. Hydro had 1,060 residents in 2000 and 969 in 2010. At that time many of them worked in Weatherford or Hinton. Three corporate hog farms were built nearby during the 1990s. Several local families follow the wheat harvest during summer. Hydro's residents have enjoyed horseback riding and picnics to the mounds south of town. These natural features have been called "the Caddo Mounds," "Antelope Buttes," and "Hydro Mounds." Travelers on the California Road named several of the landmarks, including Rock Mary. Hydro celebrated its centennial in 2001, and the local Wayne Krehbiel homestead has been honored by the Centennial Farm and Ranch Program. Town newspapers included the Hydro Journal and the Hydro Review.

The following (as per The Chicago Manual of Style, 17th edition) is the preferred citation for articles:
Ramona Armstrong Duff, “Hydro,” The Encyclopedia of Oklahoma History and Culture, https://www.okhistory.org/publications/enc/entry.php?entry=HY001.