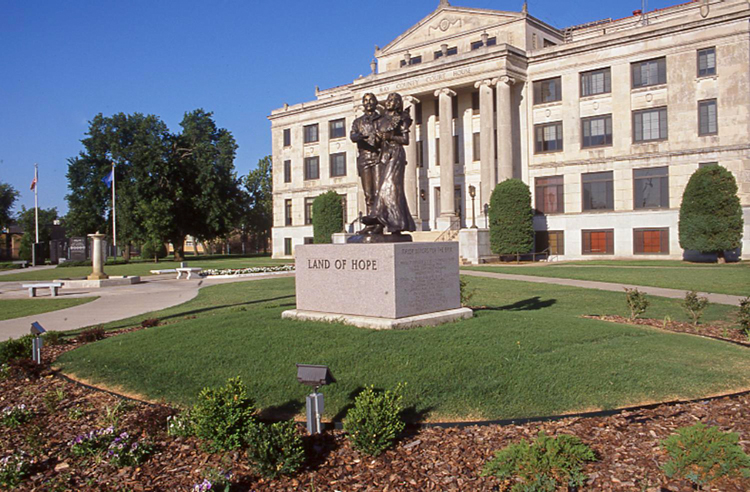 At the turn of the twenty-first century the Oklahoma Archeological Survey reported 427 archaeological sites in Kay County. Two of those were the Bryson Archaeological Site (listed in the National Register of Historic Places, NR 79001997) and the Deer Creek Site (NR 66000630). In the mid-1700s French voyageurs from Louisiana traded with the Wichita at these two sites. Early explorers included James B. Wilkinson and George C. Sibley, who came through the area in 1806 and 1811, respectively. In 1843 Nathan Boone and others passed through the southwest corner of the future county when he led an expedition from Fort Gibson to the Great Salt Plains.

Present Kay County was originally part of the Cherokee Outlet. Following the Civil War the Cherokee agreed to allow the federal government to place other tribes in the outlet as part of the terms of the Reconstruction Treaties in 1866. In June 1873 the Kansa (Kaw) arrived from Kansas and settled on a reservation in present northeastern Kay County. In 1877 the Ponca were removed from Nebraska and located on a reservation situated partially in present Kay and Noble counties. Two years later the Nez Perce were brought from the Pacific Northwest to a reservation near present Tonkawa. The Nez Perce returned to their homeland in 1885, and the Tonkawa and Lipan Apache then occupied the former's reservation. The Chilocco Indian Agricultural School, a federally sponsored boarding school, opened in 1884.

That same year David L. Payne, leader of the Boomer Movement, established a colony of settlers at Rock Falls, near present Braman. Although Rock Falls was situated in the Cherokee Outlet, Payne published the Oklahoma War Chief newspaper from that location to inform the public about the Unassigned Lands and his efforts to open them to non-Indian settlers. The Unassigned Lands were opened in the Land Run of 1889.

In preparation for opening the Cherokee Outlet to non-Indian settlers the Tonkawa received their land allotments in 1891. When the Cherokee Outlet was opened on September 16, 1893, towns such as Ponca City and Blackwell sprang into existence in present Kay County. The Ponca and Kansa land allotments occurred in 1904 and 1906, respectively. Their reservations were not opened to non-Indian settlers.

Before the land opening the secretary of the interior had assigned temporary names to the counties formed from the Cherokee Outlet. Thus, Kay County was originally designated as K County, and Newkirk had been selected as the county seat. Territorial Gov. William C. Renfrow appointed temporary county officials until an election could be held in November 1894. Before the present courthouse (NR 84003070) was dedicated on October 28, 1926, two wood-frame buildings had served county officials. By 1907 statehood Kay County boundaries included the former K County plus the area from the former Ponca and Kansa reservations. The population stood at 24,757. The federal census counted 26,999 residents in 1910 and 34,907 in 1920.

Kay County's economy has been based on agriculture and the oil and gas industry. Principal crops included wheat, corn, oats, and alfalfa. By 1908 the county had 600,533 acres in farmlands. In 1929 Bert Tredway and L. H. Wentz operated large vineyards. In 1930 Kay County had 2,849 farms consisting of 606,384 acres. Several large ranches, the 101 Ranch and the Big V, were located in Kay County. At the turn of the twenty-first century there were 929 farms with 469,493 acres in farmland, and wheat was the dominant crop.

The oil and gas industry stimulated an economic boom in the early 1900s. As early as 1894 gas had been discovered on the Marcus McClaskey farm, southeast of Newkirk. However, he kept the discovery a secret until he could prove up his land claim. By 1902 approximately six gas wells had been drilled northeast of Blackwell. In 1910 Ernest W. Marland, founder of the 101 Ranch Oil Company, drilled seven gas wells on the Millers' 101 Ranch. However, the great oil boom in Kay County was precipitated by the discovery of oil by Marland on the Ponca allotment of Willie Cries (Crys)-for-War in June 1911. Louis H. Wentz soon entered the foray to locate oil in Kay County. The oil boom and bust created temporary peaks in population and several ghost towns, such as Mervine, Dilworth, and Three Sands.

Before the establishment of trails, travelers followed the waterways. American Indians, cattlemen, the military, and boomers such as David L. Payne, created numerous trails. By 1869 cattlemen had abandoned the West Shawnee Trail, which passed near present Ponca City, in favor of the Chisholm Trail. Stagecoach and mail services through present Kay County followed the Arkansas City-Reno Road established in 1879. In 1899 the Atchison, Topeka and Santa Fe Railway built their line from Kansas into present Kay County, and the Kansas, Oklahoma and Gulf Railway (later the St. Louis and San Francisco Railway) reached Blackwell. At the turn of the twenty-first century travelers used Interstate 35 and U.S. Highways 60, 77, and 177.

Prominent politicians who were born in Kay County include U.S. Sen. Donald L. Nickles and Oklahoma Gov. and U.S. Sen. Henry L. Bellmon. In addition to Ernest W. Marland and Louis H. Wentz, other well-known county residents have included William "Bill" Pickett and the Miller brothers, Joseph, Zack, and George. Kay County is the location of the 101 Ranch site, the Marland Mansion, the Pioneer Woman Statue and Museum, and the Chilocco Indian Agricultural School. Visitors and residents have enjoyed outdoor recreation at Kaw Lake and Lake Ponca. Among the listings in the National Register of Historic Places were the Kaw City Depot (NR 79001996), Kaw Indian Agency Building (NR 73001562), the Marland-Paris House (NR 76001565), and the E. W. Marland Mansion (NR 73001561) in Ponca City. Kay County has three properties listed as National Historic Landmarks: Deer Creek Site, the Marland Mansion, and the 101 Ranch Historic District.

The following (as per The Chicago Manual of Style, 17th edition) is the preferred citation for articles:
Linda D. Wilson, “Kay County,” The Encyclopedia of Oklahoma History and Culture, https://www.okhistory.org/publications/enc/entry.php?entry=KA009.