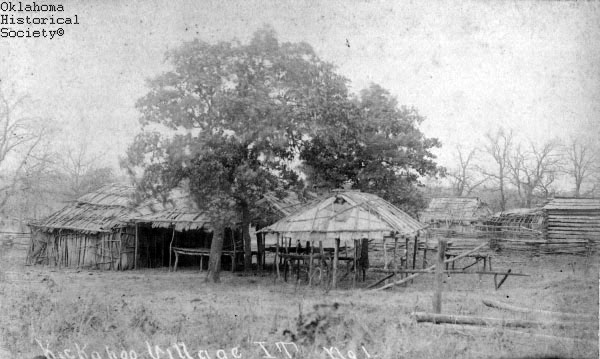 The Kickapoo Indians were first contacted by Europeans in the mid-seventeenth century in southwestern Wisconsin. They were a Woodland tribe, speaking an Algonquian language, and were related to the Sac and Fox. By the mid-eighteenth century the Kickapoo lived in two communities, the "Prairie Band," along Illinois's Sangamon River, and the "Vermillion Band," east of the Wabash River in Indiana.

The Kickapoo were allies with the French, but by the time of the American Revolution they favored the British. The Kickapoo became involved with the social movement of Tenskwatawa and Tecumseh, and later with the Black Hawk uprising. In the 1830s the prophet Kennekuk led his Vermillion band to Kansas, and he advocated accommodation to white culture.

The Prairie band resisted acculturation and continued to migrate, going to Missouri and then to the Spanish province of Texas before the 1821 Mexican Revolution. Spanish officials gave them land in Texas. After the Texas Revolution the Republic of Texas did not want them. They were forcibly evicted in 1839, and many Kickapoo journeyed to Mexico. There, in exchange for protecting their northern borders, the Mexican government gave the tribe a land grant and eventually placed them at Nacimiento. Other displaced Kickapoo settled in two villages in Indian Territory. One was located on Wild Horse Creek in the Chickasaw Nation, and the other was established in the Creek Nation near the confluence of the Canadian and Little rivers. Many Kickapoo left the Indian Territory during the Civil War and rejoined their brethren in Mexico.

In 1873 a military scheme forced some of the Mexican Kickapoo to relocate to the Indian Territory. A reservation there was assigned to them in 1883. However, they lost much of their land after enactment of the Kickapoo Allotment Act of 1893. These developments left the tribe desolate and in poverty, from which they began to recover in the 1930s and especially in the 1960s with the help of federal government programs.

The Kickapoo Tribe of Oklahoma was organized under the Indian Welfare Act of 1936. It is presently governed by a five-member Business Committee that is headquartered at McLoud. Tribal revenue is generated by the Kickapoo Casino. There were 2,522 enrolled Oklahoma Kickapoo in 2003. Many of them resided in Lincoln, Oklahoma, and Pottawatomie counties. The Kickapoo culture remains strong, and the language is still spoken. Other tribe members currently live near Topeka, Kansas, Eagle Pass, Texas, and Nacimiento, Mexico.

Muriel H. Wright, A Guide to the Indian Tribes of Oklahoma (Norman: University of Oklahoma Press, 1986).

The following (as per The Chicago Manual of Style, 17th edition) is the preferred citation for articles:
Annette Kuhlman, “Kickapoo,” The Encyclopedia of Oklahoma History and Culture, https://www.okhistory.org/publications/enc/entry.php?entry=KI004.