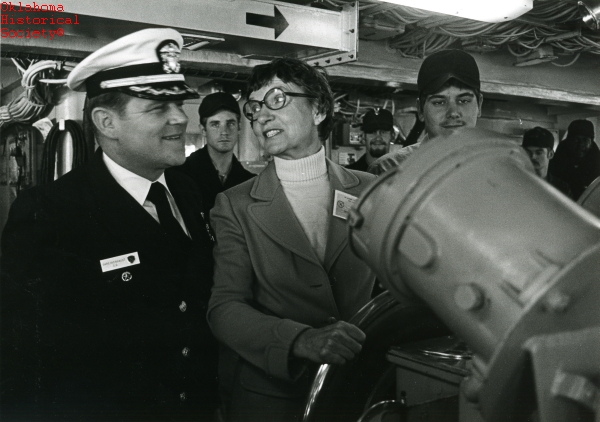 Oklahoma City Mayor Patience Sewell Latting, daughter of Frank A. and Leila Yates Sewell, was born on August 27, 1918, in Texhoma, Oklahoma. A 1938 honors graduate of the University of Oklahoma with a bachelor's degree in mathematics, she received a master's degree in economics and statistics from Columbia University in 1939. She then worked as a researcher for the Chase Manhattan Bank. Homesick for Oklahoma, she returned to the Sooner State and married Trimble B. Latting, a lawyer and oilman, in 1941. The couple had four children.

Latting entered politics through involvement in the Parent Teacher Association and the League of Women Voters. As the legislative chair of the statewide Oklahoma Congress of Parents and Teachers, she often visited the state capital, and she soon realized that rural interests dominated. The Oklahoma Legislature had failed to reapportion itself since statehood, and thus urban areas were underrepresented. After serving as a witness before a federal court investigating the legality of the 1964 election, Latting was involved in drawing new district boundaries that gave representation to urban areas.

In the early 1960s Latting's career began to move toward public office. In 1967 she won election to the Oklahoma City Council on a slate nominated by the Association for Responsible Government, a reform group. As the first woman on the council, she called for stricter housing and building codes and for more African American participation in government. Four years later, amidst concerns that entrenched city officials were abusing their power, she decided to run for mayor. Although she was a Democrat, she campaigned without party affiliation. In a difficult race, she defeated fellow council member Bill Bishop in a runoff and became Oklahoma City's first and only woman mayor and the first woman to head the government of an American city of more than 350,000 people. She was reelected in 1975 and 1979.

During her mayoral tenure from 1971 to 1983, Latting was instrumental in the adoption of a master development plan in 1977 as well as in the opening of the Neighborhood Development and Conservation Center and the attendant development of neighborhood associations to combat crime and poor zoning. A General Motors assembly plant located in Oklahoma City, and the Mercy and Baptist medical centers expanded in the northwest part of the city. During her terms, several new parks such as the Myriad Gardens were built, and downtown was redeveloped. She also contended with a police strike in the fall of 1975 and was involved in an investigation that led to the disclosure of fraud in the electrical inspection division. During her administration the National Municipal League presented the All-America City Award to Oklahoma City in 1978.

Latting received numerous awards for her civic work, including the Outstanding Oklahoman by Phi Beta Kappa (1976), the Woman of the Year in Civic Work by the Oklahoma City chapter of Theta Sigma Phi (1961), and the Outstanding Woman of Oklahoma by the Soroptimists (1969). In 1980 she was named to the Oklahoma Hall of Fame.

Following her departure from public life Latting continued to be involved in volunteer organizations. In 1995 she received the Constitution Award from Rogers State College for her dedication to public service and devotion to constitutional ideals. She was also in the inaugural group inducted into the Oklahoma Hall of Fame for City and Town Officials in 2001. She continued to live in Oklahoma City. Patience Latting died on December 29, 2012.

The following (as per The Chicago Manual of Style, 17th edition) is the preferred citation for articles:
Carolyn G. Hanneman, “Latting, Patience Sewell,” The Encyclopedia of Oklahoma History and Culture, https://www.okhistory.org/publications/enc/entry.php?entry=LA026.