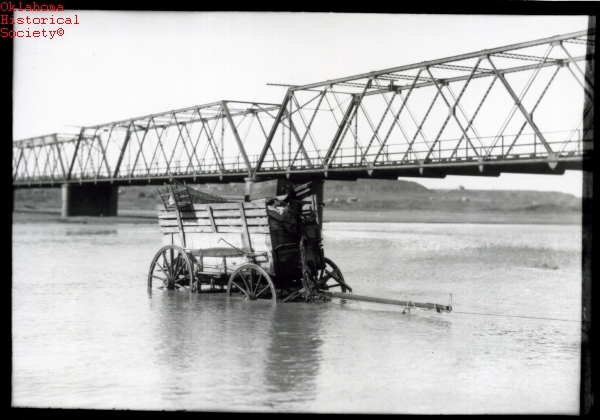 Located in Cleveland County, Lexington lies two and one-half miles across the Canadian River from Purcell on State Highway 39. In 1835, north of the present town, Maj. Richard B. Mason established Camp Holmes. There many of the Plains Indian tribes and members of the Five Tribes, along with the Osage, signed the Treaty of Camp Holmes on August 25, 1835. Subsequently, Auguste P. Chouteau operated a trading post at the site, which he called Camp Mason. Later, Jesse Chisholm maintained a store there. The area stood within the Unassigned Lands prior to its opening with the Land Run of 1889. Several entrepreneurs planned Lexington prior to the run, filing the necessary legal papers on the eventful day. The town name emanates from Lexington, Kentucky.

The Post Office Department designated a Lexington post office on February 21, 1890, with Henry Stuart as postmaster. The community could not support its municipal government and assessed a high tax on liquor sales, which caused infighting and a loss of incorporation. After a compromise, the town reincorporated in 1892. Saloons dominated the town's business landscape from its founding until 1907 statehood when intoxicating liquor was prohibited. The village stood as a "whiskey town" on the border of Indian Territory, across the river from Purcell, a thriving city with railroad service. In order to sell alcohol as close to Purcell as possible, a community known as Sandtown emerged on the floodplain of the Canadian River between the two towns. This collection of bars was in Lexington's legal jurisdiction. In 1900 the Weitzenhoffer and Turk Distillery, the largest in Oklahoma Territory, began near the town, and operated until statehood.

In 1890 Lexington's population stood at 223, and it increased to 861 in 1900. In 1898 five saloons, seven general stores, eight doctors, a veterinarian, a broom factory, three blacksmiths, a harness and saddlemaker, a hotel, the Cleveland County Leader-Democrat newspaper, and other retail outlets served the town. Surrounding fruit orchards benefited the local economy, with W. T. Harness, James Little, and F. P. Mosely the leading growers. The Glenwood Fruit Farm, owned by Dr. Robert Thacker, soon became the eminent producer. Cotton and corn were also early agricultural mainstays. By 1908 the community supported two banks. Other newspapers that have reported to the town included the Lexington News and Notes, the semiweekly Headlight, the Lexington Southern Democrat, the You Alls Doins, the Cleveland County Rural News, the Lexington Leader, and the Lexington Sun. The population was 950 in 1920 and 836 in 1930.

During World War II the U.S. Navy constructed a gunnery school east of Lexington. After the war ended, the state acquired the campus and located an annex to the Central State Mental Hospital (later Griffin Memorial Hospital) there. In 1971 the Oklahoma Department of Mental Health closed the facility and gave the land to the Department of Corrections. A minimum-security prison, named the Regional Treatment Center, opened soon after. In 1976 the state began construction on the Lexington Assessment and Reception Center (LARC). The center processes all prisoners sentenced to Oklahoma's prison system. It also houses medium- and minimum-security facilities. In 1978 the Regional Treatment Center, which was separate from the LARC, became the Joseph Harp Correctional Center, a medium-security prison.

The following (as per The Chicago Manual of Style, 17th edition) is the preferred citation for articles:
Larry O'Dell, “Lexington,” The Encyclopedia of Oklahoma History and Culture, https://www.okhistory.org/publications/enc/entry?entry=LE015.

US Highway 77 Bridge at the Canadian River, National Register of Historic Places