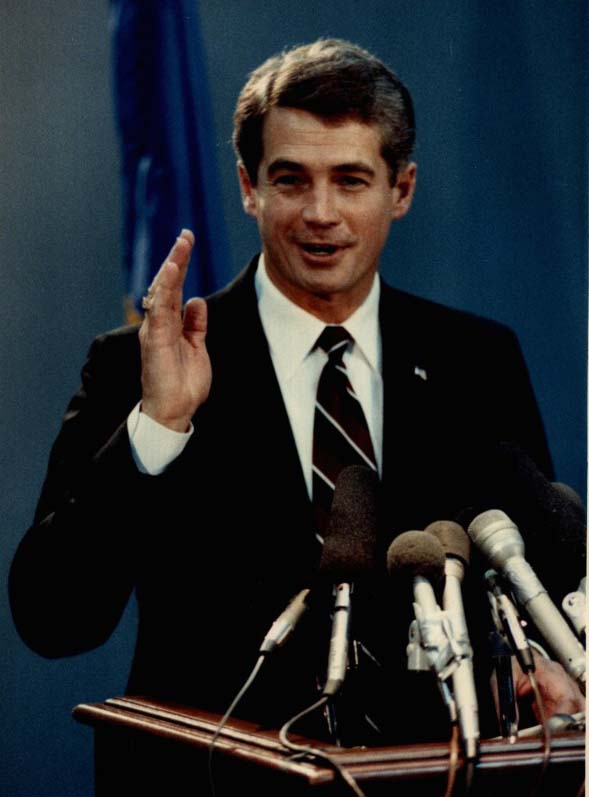 Prominent in military affairs during the 1980s and 1990s, U.S. Rep. David Keith McCurdy was born in Canadian, Texas, on March 30, 1950, to T. L. and Aileen Geis McCurdy. He graduated from high school in Yukon, Oklahoma, in 1968 and attended the University of Oklahoma, receiving a bachelor's degree in 1972 and a J.D. in 1975. From 1969 to 1972 he served in the U.S. Air Force Reserve, attaining the rank of major. In 1971 McCurdy married Pamela Sue Plumb, a medical doctor, and the couple had three children, Joshua David, Cydney Marie, and Shannon Rose. From 1975 to 1977 he was assistant attorney general for the state of Oklahoma. In 1977–78 he was a Rotary graduate fellow at the University of Edinburgh, Scotland, where he studied international economics. He practiced law in Norman, Oklahoma, from 1978 to 1980. In 1984 the United States Jaycees named him one of the Ten Outstanding Young Men of America.

In 1980 McCurdy, a Democrat, was elected as to the U.S. House of Representatives to serve Oklahoma's Fourth District. He served from January 3, 1981, to January 3, 1995. A strong advocate for the United States military, he supported authorization of the MX missile program, funding of Nicaraguan contras, and deployment of troops in the Persian Gulf War, and he frequently found himself at odds with members of his party on defense and foreign policy issues. In 1991 he became chair of the Permanent Select Committee on Intelligence and two of its subcommittees, Program and Budget Authorization, and Oversight and Evaluation. Two years later he was bumped from the committee, perhaps as a rebuff to his criticism of House Speaker Tom Foley. McCurdy also sat on Committee on Armed Services, chairing its Subcommittee on Military Installations and Facilities, and on the Committee on Science, Space and Technology, chairing its Subcommittee on Transportation, Aviation and Materials. He was co-chair of the Congressional Sunbelt Caucus and chair of the CDM Task Force on Foreign Policy and Defense As vice chair of the Democratic Leadership Council he served under chair and then-governor Bill Clinton. At the 1992 Democratic National Convention he seconded Clinton's nomination as the party's presidential candidate.

In 1994 the congressman ran for the U.S. Senate seat vacated by David Boren. His Republican opponent was First District Rep. Jim Inhofe, who defeated him in a general election that witnessed the end of the Democrats' forty-year control of the House. McCurdy blamed his and other Democrats' losses on President Clinton's unpopularity.

In 1995 in McLean, Virginia, the former congressman initiated a consulting and investment company that worked primarily with health care and high-tech companies. In 1998 he became president of Electronic Industries Alliance, an Arlington, Virginia, trade organization for the electronics manufacturing and information technology industries.

The following (as per The Chicago Manual of Style, 17th edition) is the preferred citation for articles:
Todd J. Kosmerick, “McCurdy, David Keith,” The Encyclopedia of Oklahoma History and Culture, https://www.okhistory.org/publications/enc/entry.php?entry=MC015.