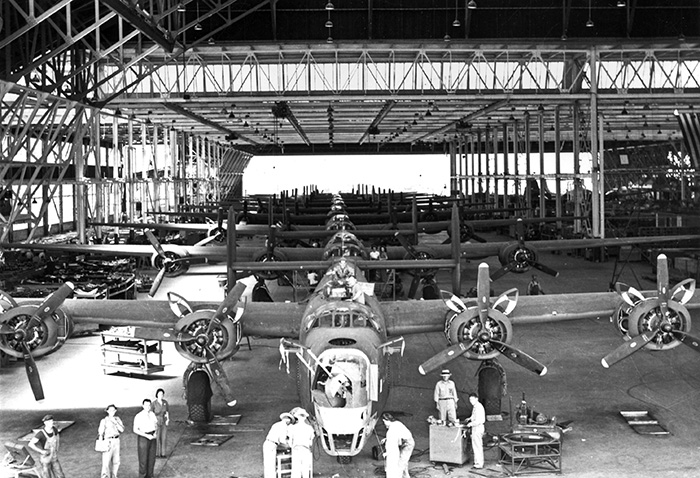 The Midwest City Douglas Aircraft Company Plant constructed more than half of the ten thousand C-47 Skytrain U.S. Army cargo planes (nicknamed "Gooney Birds") manufactured during World War II. When the Midwest Air Depot project was announced in Oklahoma City in 1941, twelve city and chamber of commerce leaders, working through the Industries Foundation, also sought to acquire an aircraft factory. On October 17, 1941, Robert A. Singletary, the chamber's Washington, D.C. lobbyist, proposed three sites to the War Department: 480 acres near the depot's east side, Will Rogers Field, and Bethany. City officials met with the Douglas Aircraft Company, which already operated a facility in Tulsa, to secure negotiations. Six chamber representatives (Wilbur E. Hightower, Stanley Draper, Jack Hull, Fred Jones, Virgil Browne, and E. K. Gaylord) flew to Los Angeles to confer on October 22, 1941. In January 1942 two Douglas officials inspected the locations, as did officials from the U.S. Army Air Corps. The officials decided upon the acreage adjoining the depot and wanted immediate contract commitments such as clearance of pipelines, extension of water mains and other utilities, rail service, local bus transportation, and access roads.

Although formal ground breaking for the Douglas plant occurred on July 4, 1942, construction began on March 23, 1942, for the three-quarter-mile, red brick, windowless (blackout) building, finished at a cost of $24 million. After nine months workers began fabricating small parts and subassemblies in a three-hundred-square-foot area. Managed by C. C. Pearson, the factory rolled out its first C-47 during the first week of March 1943, although the plant was not completed until March 26. By October 1943, 270 acres had been added for a five-million-dollar aircraft modification annex to customize C-47s according to army specifications.

The Douglas plant produced 5,354 C-47s from March 1943 until August 1945. The plant built thirteen planes per day during peak performance and fabricated spare parts for five hundred more "Gooney Birds." The plant also assembled parts for four hundred C-54 Skymaster Big Brother military transport planes and nine hundred A-26 Invader "attack" bombers. As many as thirty-eight thousand Oklahomans labored at the Douglas plant, and more than half were women.

Victory in Europe Day (May 8, 1945) and Victory in Japan Day (August 15, 1945) brought an end to the war, and the Douglas plant officially closed on August 17, 1945. Redesignated Building 3001, the plant was transferred to the Oklahoma City Air Technical Service Command (OCATSC) on November 1, 1945. At the turn of the twenty-first century Building 3001 at Tinker Air Force Base served as the headquarters, modification, and maintenance building for the OCATSC, now the Oklahoma City Air Logistics Center. A C-47 "Skytrain" cargo plane stood on an outdoor concrete pedestal to commemorate the Midwest City Douglas Aircraft Company Plant.

The following (as per The Chicago Manual of Style, 17th edition) is the preferred citation for articles:
Tally D. Fugate, "Midwest City Douglas Aircraft Company Plant," The Encyclopedia of Oklahoma History and Culture, https://www.okhistory.org/publications/enc/entry.php?entry=MI010.