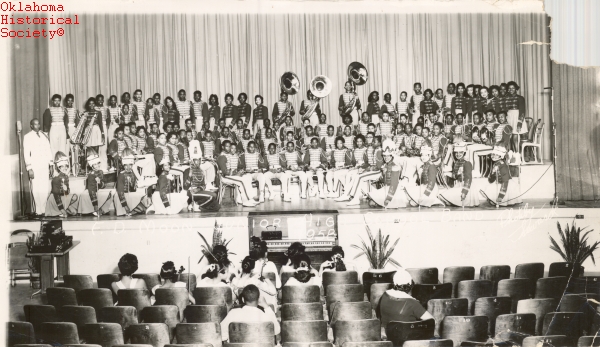 African American educator Frederick Moon was born on May 4, 1896, at Fallis, Oklahoma Territory. Son of Henry Clay and Pollie Twiggs Moon, Frederick Moon was educated in the segregated schools of Lincoln County, Oklahoma. Because there was no high school for African Americans near his home, he entered Oklahoma Colored Agricultural and Normal University (now Langston University) in the ninth grade, and he completed high school and two years of college there. In 1929 he earned a bachelor of science degree. He earned a master of arts degree at the University of Chicago in 1938. During his time at Langston he led an effort to develop a memorial to Inman Page, the college's first president.

Moon began his teaching career in 1921 at Crescent, Oklahoma, and he helped the school gain accreditation. In 1929 the Oklahoma Association of Negro Teachers elected him as president. In 1931 he taught in and was principal of Wewoka Douglass High School, and he again assisted a school in gaining accreditation with the North Central Association. Moon married Leoshia Harris, of Oklahoma City, on August 28, 1935. In 1940 he moved to Oklahoma City and became principal of Douglass High School. He continued in that position until 1961. Considered the "dean" of African American education, he was elected to the Oklahoma City Board of Education in 1972 and served as its first African American president in 1974. He served at a time when federally mandated desegregation occurred within the Oklahoma City Public School System. During this period the school district carried out a program of busing students across town in order to bring racial equality to the schools.

Moon was also a civic leader in the community. He served as a director for the YMCA. He was variously president of the Oklahoma City Urban League, the Langston Alumni Association, and the Oklahoma Association of Negro Teachers, and he was a member of the National Education Association. He was vice president of the National Association of Secondary Principals and of the American Association of School Administrators and served on the mayor's Human Relations Commission and the Urban Renewal Authority. The Oklahoma School of Religion at Langston awarded him an honorary doctorate in humanities. His publications included Organization and Administration of High School for Negroes in Oklahoma, A Fifth Freedom for the Negro, and Teacher Integration in the Border States. He resigned his position with the board of education due to declining health in December 1974. Frederick Moon died on December 16, 1975, in Oklahoma City.

The following (as per The Chicago Manual of Style, 17th edition) is the preferred citation for articles:
William D. Welge, “Moon, Frederick Douglass,” The Encyclopedia of Oklahoma History and Culture, https://www.okhistory.org/publications/enc/entry.php?entry=MO011.