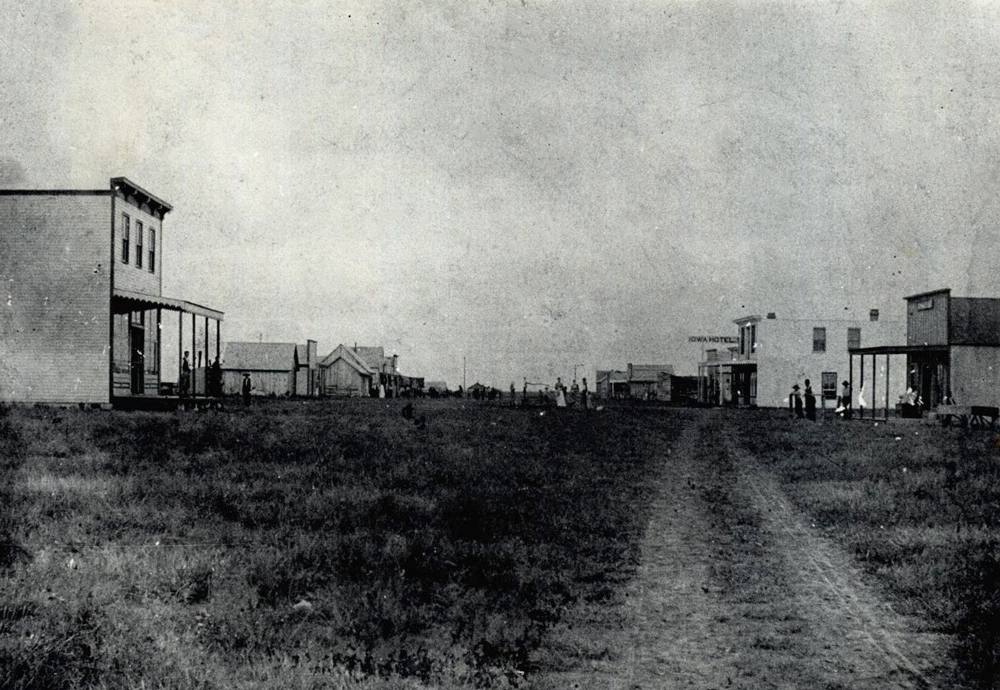 Located nine miles south of Oklahoma City, Moore lies in Cleveland County on State Highway 37, with Interstate 35 and U.S. Highway 77 running through its city limits. In 1886–87 the Southern Kansas Railway (a working subsidiary of the Atchison, Topeka and Santa Fe Railway which bought it outright in 1899) laid tracks through the area, which was positioned in the Unassigned Lands prior to the Land Run of 1889. At the present townsite the railway located a watering stop and named it Verbeck. Reportedly, railroad employee Al Moore lived in a boxcar there, which accounts for the later name. The community received a postal designation in May 1889 with Albert Petite as postmaster.

When it incorporated in 1893, the town had a hotel, a livery, three general merchandise stores, a saloon, a restaurant, a lumber company, a carriage, plow, and wagon works, and a grocer. Two doctors served the residents. In 1894 the Cleveland County Courier began operation. Other community newspapers have included the Moore Journal, the Moore Enterprise, the Moore Messenger, the Moore Monitor, the Moore Star, the Cleveland County Times, and the Moore American. In 1900 the population stood at 129, climbing to 225 in 1910. That year the Oklahoma Railway Company constructed an interurban line from Oklahoma City to Moore. By 1911 residents supported a bank, a blacksmith, a milling and grain company, a cotton oil company, a livery, a hardware store, a drugstore, two doctors, a creamery, and four general stores.

Moore remained rural, serving area ranchers and farmers through the mid-twentieth century. In 1930 the population was 538, declining to 499 in 1940, before reaching 942 in 1950. In 1946 the community maintained a bank, a cotton gin, a grain elevator, a lumber company, and several retail outlets. Between 1960, when the population was 1,783, and 1970, with a population of 18,761, the town was one of Oklahoma's fastest-growing cities. Growth led to expansion of city services and an influx of retail and manufacturing businesses. In 1963 a second bank received its charter. In 1971 the Moore Municipal Hospital opened. The town called itself "the minute city" because of its proximity to Midwest City's Tinker Air Force Base, Oklahoma City's General Motors Assembly Plant and Mike Monroney Aeronautical Center, and Norman's York International Plant and University of Oklahoma. These employment hubs attracted a large number of residents. By 1980 the population mushroomed to 35,063, and it continued to grow, standing at 40,318 in 1990. At the beginning of the twenty-first century the public school system (with more than two thousand employees), Convergys Corporation, Wal-Mart, Cendant Corporation, and Vaughn Foods were the leading employers.

Various small buildings served as the schoolhouses until a dedicated two-story building was constructed in 1899. Until 1920 it housed grades one through ten. In that year five school districts consolidated with Moore, establishing a high school. In 1928, after a fire destroyed the 1899 building, the town built a new high school, which in 1984 was listed in the National Register of Historic Places (NR 84000379). In 1967 high school students relocated to a new campus at Main Street and Eastern Avenue, and the old school served as a junior high. In 1988 the high school split to two campuses, Moore and Westmoore. In 2000 the Moore School District enrolled 18,101 students. In 1977 Moore annexed the land that held Hillsdale Free Will Baptist College, which had completed its first building at this site in 1966.

Moore lies in an area that has often been called "tornado alley," and the town has had numerous encounters with these storms. The largest and most devastating occurred on May 3, 1999. That tornado, rated as an F-5 on the Fujita scale, cut a large path through the town, damaging more than three thousand homes and killing five people. From the time the tornado touched ground in Grady County until it dissipated in eastern Midwest City, it killed a total of thirty-eight and caused approximately $1 billion in damage. On May 9, 2003, another tornado took a similar path through the town, causing significant damage. On May 20, 2013, a 1.3-mile-wide, EF5/EF4 tornado struck the community, resulting in 23 deaths. The twister destroyed the Plaza Towers Elementary School, killing seven children. Damage to property, homes, and businesses approached $2 billion. The tornado was the nation's deadliest since the Joplin, Missouri, tornado of 2011.

In 2000 Moore's population stood at 41,138. The town's residents and visitors could enjoy several amenities, including a library, eight city parks, a community center, a community pool, several golf courses, and four hotels. In 2005 the Moore Medical Center, a forty-five-bed hospital, opened. It replaced an older medical facility that had closed in 1993. The U.S. Census of 2010 counted 55,081 residents of Moore.

The following (as per The Chicago Manual of Style, 17th edition) is the preferred citation for articles:
Larry O'Dell, “Moore,” The Encyclopedia of Oklahoma History and Culture, https://www.okhistory.org/publications/enc/entry.php?entry=MO014.