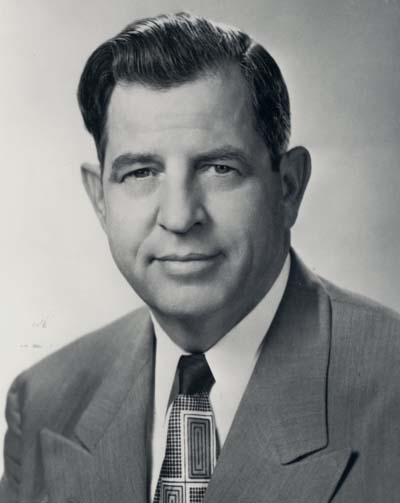 Oklahoma's governor from 1951 to 1955, Johnston Murray was born on July 21, 1902, in Emet, Chickasaw Nation, Indian Territory, to William Henry "Alfalfa Bill" and Mary Alice Hearrell Murray. Johnston Murray was the second son of four boys and one girl. The family lived in Tishomingo, Oklahoma, where the children attended public school. Later, when his father served as a U.S. representative, the younger Murray attended school in Washington, D.C. Murray married Marion Draughon of Sulphur, Oklahoma, in 1923. Their only child was Johnston, Jr. Six years into their marriage, they divorced.

In 1924 Murray graduated from Murray State School of Agriculture (now Murray State College), Tishomingo, where he had played football. After graduation he followed his father to Bolivia, where the elder Murray established an agricultural colony. On May 1, 1933, Murray married Willie Roberta Emerson. He received his law degree from Oklahoma City University in 1947.

On January 9, 1950, Johnston Murray, a Democrat, announced his intention to run for governor. He won the primary runoff by 1,009 votes. His opponent, William O. Coe, an Oklahoma City attorney, decided to use the divorce proceedings filed by Murray's first wife accusing him of child desertion. To Coe's surprise, Marion Murray supported her former husband's candidacy. As governor Murray's plans to reduce state spending and to reform state government were thwarted by strained relations with state legislators.

As Johnston Murray was prohibited constitutionally from succeeding himself, his second wife, Willie, decided to seek the Democratic gubernatorial election in 1954. However, she failed to gain enough support to win the election. Several months afterward they endured a bitter divorce, with prolonged proceedings in which Willie Murray accused him of public drunkenness and adultery. With the divorce finalized in February 1956, Murray later married Helen Shutt. Politically and financially ruined, he moved to Fort Worth, Texas, where he worked for an oil well servicing company and later a limousine service. While Murray was working at the limousine service, Oklahoma State Sen. Gene Stipe saw him and suggested that he return to Oklahoma to practice law. In February 1960 Murray formed a law partnership in Oklahoma City with Whit Pate, who had served as a legal assistant to the former Gov. J. Howard Edmondson. Murray later became a staff lawyer for the Oklahoma Department of Public Welfare. He died on April 16, 1974, in Oklahoma City, and was buried next to his father in Tishomingo.

The following (as per The Chicago Manual of Style, 17th edition) is the preferred citation for articles:
Erin Dowell, “Murray, Johnston,” The Encyclopedia of Oklahoma History and Culture, https://www.okhistory.org/publications/enc/entry.php?entry=MU013.