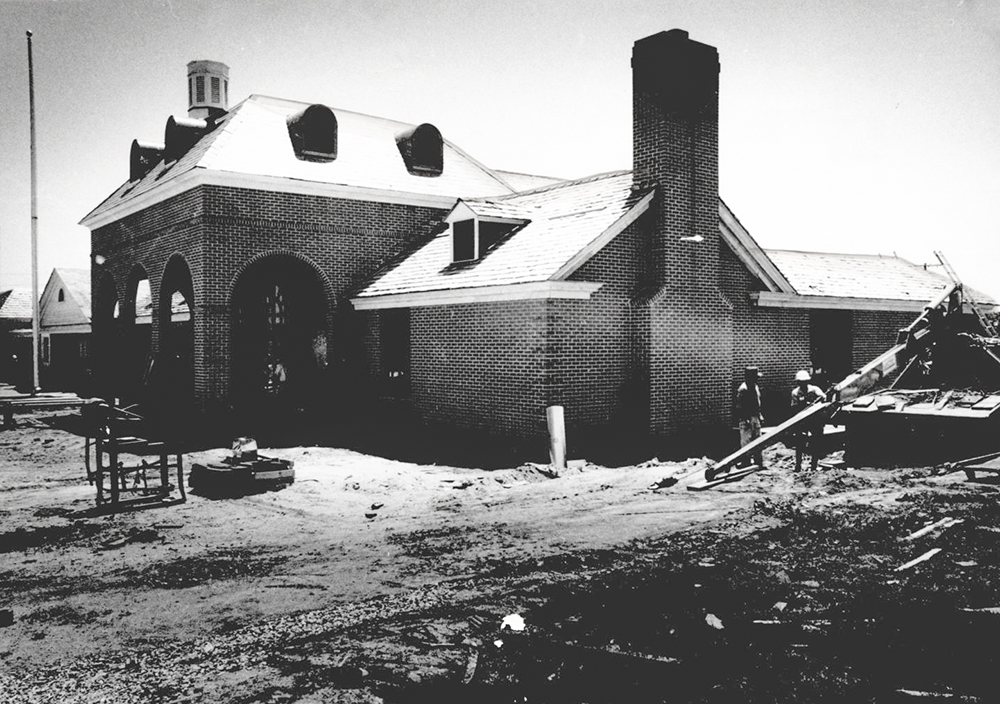 In 1928 real estate developer Gilbert A. Nichols planned Nichols Hills as a community with emphasis on palatial mansions situated on substantial acreages. The 2.4-square-mile city in the northwest quadrant of Oklahoma County is surrounded on the east, south, and west by Oklahoma City and on the north by The Village. The town boundaries are roughly: Westminister Place on the north, Western Avenue on the east, Northwest Sixty-third Street on the south, and Country Club Drive on the west.

The concept for Nichols Hills was advanced in 1925 when Gilbert A. Nichols accompanied S. Chester Davis, president of the Oklahoma City Real Estate Board, to a convention in Dallas, Texas. Davis had lived in California for two years. While they toured upscale neighborhoods in Dallas and Fort Worth, Davis extolled the virtues of Beverly Hills, suggesting that a similar community should be built near Oklahoma City. Nichols had recently purchased 2,780 acres of land "out in the country," north of Northwest Sixty-third Street. By 1928 Davis was working for Nichols as his business manager. He insisted that Nichols take his wife on a tour of the country to see the posh neighborhoods of America's major cities, including Beverly Hills. By the time they returned Nichols was ready to embark on what would become his most ambitious and distinctive legacy to Oklahoma, the creation of a town where home building and the business amenities conducive to family life would be paramount.

Industry and large business enterprises would be discouraged through the adoption of restrictive regulations. The typical grid pattern of city streets would be avoided in favor of wide lanes that followed the contours of the low hills. The starkness of the prairie would be broken up by the planting of thousands of trees and shrubs to create an English countryside ambiance. In the early 1930s it was advertised as a suburban community located five miles north of downtown Oklahoma City that required a fifteen-minute drive to work. The residential area would be favorable to outdoor sports with the availability of two golf courses, tennis courts, bridal paths, polo field, and swimming pools. Accessibility to the nearby Curtiss-Wright Flying Field was an important asset to prominent professionals living in the Nichols Hills area.

In fall 1928 ten clapboard shacks were erected on Nichols's land, and ten of his business partners and friends moved in for the night. The following day they were able to attest that they were the legal residents of Nichols Hills and asked that the town be incorporated. A temporary board of trustees was named, and they chose Davis as their mayor. Lot sales began soon afterward, and it was reported that more than $1 million in sales were recorded in the first week. In 1929, when the incorporation was approved, Davis was reelected mayor. In the interim Nichols hired a Kansas City architectural firm and gave them his specifications for the new city. Nichols wanted a grand entry into the community, so two Norman-style towers rose at the corner of Northwest Sixty-third Street and Western Avenue. Then, because he wanted people to pass by his estates slowly, to fully appreciate their elegance and architecture, the road curved aimlessly into the development. By late 1931 there were thirty-five occupied homes, a $300,000 country club, and riding stables in Nichols Hills. It became the social center of Oklahoma City, but Nichols wanted something more. He wanted it to also be the Oklahoma City Country Club, offering to trade the Nichols Hills Country Club for the old Oklahoma City Country Club at Northwest Thirty-ninth Street and Western Avenue. Some members balked at the suggestion, because they believed that Nichols would develop the old country club and make more money. By 1932 their resistance was broken, and the deal was closed.

During the Great Depression Nichols Hills continued growing, and the board of trustees faced difficulties providing city services. They approached Oklahoma City officials asking if they would consider annexing Nichols Hills. The answer was an unqualified "no." Forced to forge ahead on its own, the city never again considered annexation or merger with any other municipality. In 1934 the city was new and fanciful to the extent that the Ford Motor Company filmed that year's commercials (for showing at movie theaters) in Nichols Hills. In 1959 the city adopted a charter-council-city manager form of government.

In 1940 the first U.S. Census of Nichols Hills counted 942 residents. The town grew to 2,606 in 1950 and 4,897 in 1960. By that time S. Chester Davis represented the Oklahoma City Chamber of Commerce and purchased the right-of-way for the Northwest Thirty-ninth Street Expressway, giving moneyed home buyers easy access to eastern Canadian County. The Northwest Expressway to Kingfisher was under construction, making Piedmont accessible to people wanting to build big houses on an acreage in the country. The city of Edmond, via the Broadway Extension, became a viable alternative to Nichols Hills, for people who had the money to afford to live in Nichols Hills but desired spacious rural living. The 1970 census showed a drop in population to 4,478. The decline continued to 4,153 in 1980, 4,020 in 1990, and the count held steady at 4,056 in both 2000 and 2010. The city compensated by allowing some growth in retail establishments, still favoring those businesses that were associated with family activities.

At the turn of the twenty-first century some Nichols Hills homeowners advocated razing houses valued from $350,000 to $1 million when their current owners were ready to sell. Those residents wanted to keep their city exclusive. In order to maintain that status, they wanted new, larger, more expensive houses built in place of the smaller ones. The house at 7316 Nichols Road is listed in the National Register of Historic Places (NR 90001367). Nichols Hills does not have a newspaper but has a monthly magazine, the Nichols Hills News. At the turn of the twenty-first century Nichols Hills's residents benefited from a monthly E-News newsletter and a free "R-U-OK" telephone reassurance program. The community had approximately eighteen hundred homes and 138 commercial businesses.

The following (as per The Chicago Manual of Style, 17th edition) is the preferred citation for articles:
Thomas L. Hedglen, “Nichols Hills,” The Encyclopedia of Oklahoma History and Culture, https://www.okhistory.org/publications/enc/entry.php?entry=NI002.