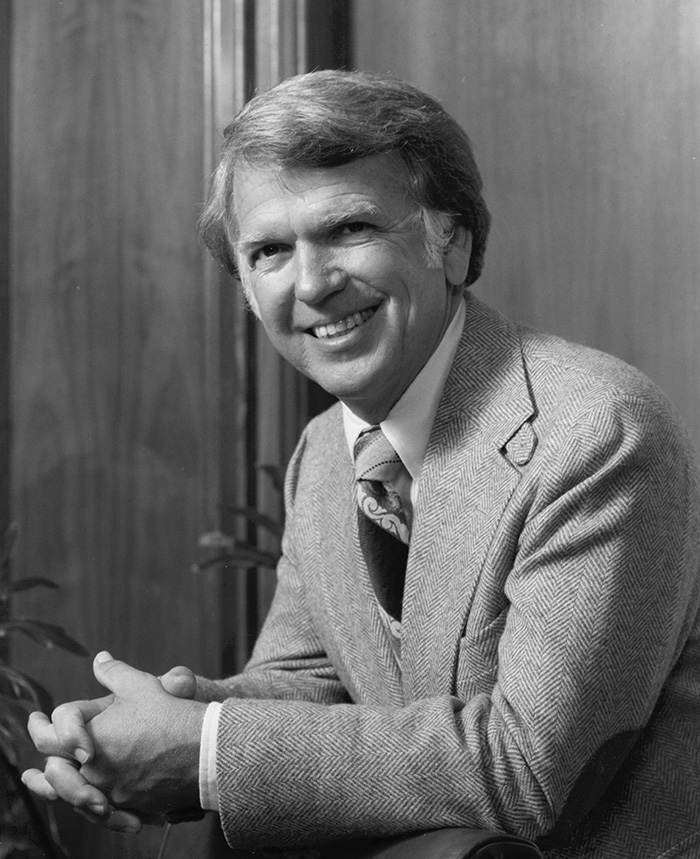 George P. Nigh served four different terms as governor, more than anyone in state history. He was born in McAlester, Oklahoma, to Wilber and Irene Nigh on June 9, 1927. After graduating from Eastern Oklahoma A&M College at Wilburton and East Central State College at Ada, he returned to McAlester and became a school teacher. In 1950, at age twenty-three, Nigh became the youngest member of the state legislature when elected to the House of Representatives from Pittsburg County. In 1953 he introduced the bill that made "Oklahoma!" the official state song.

In 1958 at age thirty-one Nigh was elected lieutenant governor, the youngest in state history and the youngest in the nation at the time. He failed in a bid for the governor's office in 1962 but became governor for nine days in January 1963 after the death of U.S. Sen. Robert S. Kerr. The sitting governor, J. Howard Edmondson, resigned in order to be appointed by Nigh to fill Kerr's Senate seat. During Nigh's nine-day term he fired and replaced the members of the Oklahoma Planning and Resources Board to facilitate the approval of an agreement with the federal government to build the Arrowhead and Fountainhead lodges on Lake Eufaula.

After he left public office, Nigh started a public relations firm. Newspapers called him the most eligible bachelor in the state. He had dated but never found a girl he wanted to marry until he was introduced to brown-haired Trans World Airlines (TWA) ticket agent Donna Mashburn. A few months later they were married. She had a ten-year-old son, Berry Michael Mashburn. Together, the Nighs had a daughter, Georgeann.

In 1966 Nigh was elected lieutenant governor of Oklahoma again and served until he realized his lifelong dream of being elected governor of Oklahoma in the 1978 election. Gov. David Boren left office five days early to assume his new role as U.S. senator. Boren resigned as governor on January 2, 1979, at 11:59 p.m. Constitutionally, Nigh at that moment became governor for a second time. When Nigh was sworn in for his full four-year term five days later, it was actually the third time he had served as governor.

Nigh delivered his inaugural address at the State Capitol, not from a prepared text, but from cryptic notes written on his left hand. He had for most of his adult life written key words on his hand to refresh his memory when he stood before audiences. While waiting to be escorted onto the inaugural platform on the south steps of the Capitol, Nigh peeled off his black leather glove to reveal yet another set of notes for his inaugural speech.

As lieutenant governor and governor, Nigh was Oklahoma's greatest cheerleader. As one of the nation's most popular after-dinner speakers, he pushed Oklahoma tourism and industrial expansion efforts and enticed movie producers to film on location in the state.

After record tax cuts and advances in almost every area of state government, including sweeping organizational changes, Nigh was reelected for a fourth term in 1982. He is the only gubernatorial candidate to carry all of the state's seventy-seven counties. He served Oklahoma well during his eight-year stretch as governor from 1979 to 1987. As a former member of the Oklahoma House and lieutenant governor, he had worked closely with the legislature during the best and worst of economic times. In his first gubernatorial term state revenues hit all time highs. But in his second term falling oil and gas prices cut deeply into state government's income and resulted in budget cuts and large tax increases. Many believed Nigh's steady hand during the economic downturn prevented long-range damage to the Oklahoma economy. He presided over state government during two of the most controversial moral dilemmas of the twentieth century, horse racing and liquor by the drink.

As governor Nigh increased minority representation on state boards and commissions and in state agency management positions. He also appointed the first women to be Oklahoma Supreme Court justices, Alma Wilson and Yvonne Kauger. He led unprecedented state efforts in highway construction, funding for the arts, and improving Oklahoma's penal system.

Later, Nigh served as president of the University of Central Oklahoma. In that capacity he engineered a rehabilitation and enlargement of the college's physical plant. George Nigh and his wife, Donna, headed the Donna Nigh Foundation, a nonprofit organization serving Oklahomans with developmental disabilities. At the end of the twentieth century George Nigh worked in the banking industry.

The following (as per The Chicago Manual of Style, 17th edition) is the preferred citation for articles:
Bob Burke, “Nigh, George Patterson,” The Encyclopedia of Oklahoma History and Culture, https://www.okhistory.org/publications/enc/entry.php?entry=NI007.