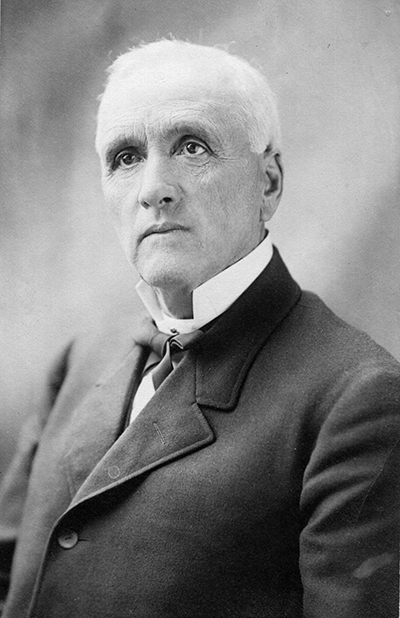 An Ohio-born Oklahoma City businessman, Henry Overholser became wealthy through varied business successes in Indiana, Colorado, and Wisconsin before arriving in Oklahoma City a few days after the Land Run of 1889 into the Unassigned Lands. His arrival in the new town was preceded by the arrival of several carloads of prefabricated wood-frame buildings he had purchased in Michigan to sell in his new home. For the next twenty-six years this entrepreneurial spirit pervaded Overholser's ventures in Oklahoma.

Within a few days of arriving, Overholser erected six business buildings on lots he purchased on Grand (now Sheridan) Avenue, and within a month he was elected president of the new Board of Trade, precursor to the Oklahoma City Chamber of Commerce. Twice running unsuccessfully for mayor, he was elected to the Oklahoma County Commission in 1894.

Overholser used his skill and wealth to encourage new business by investing in capital improvements and by creating agricultural services to draw farmers to the new town. In 1895 he and C. G. Jones organized the St. Louis and Oklahoma City Railroad, which began service in 1898 and linked Oklahoma City to Tulsa, Kansas City, and St. Louis via the Frisco line. At about the same time Overholser was instrumental in promoting a streetcar line for the city. At the turn of the century the local economy was booming and the population had tripled, due in large part to his efforts.

He was a firm believer in providing services and entertainment for the public. In 1889 he built the Grand Avenue Hotel. In 1890 he erected the magnificent Overholser Opera House on Grand Avenue, followed by the Overholser Theater at Grand and Robinson. In 1906 he helped the Chamber of Commerce purchase grounds at Tenth and Eastern for a permanent home for the State Fair of Oklahoma, and he served many years on the Fair Board.

While living in Indiana, Overholser had married, and the union, which ended in divorce circa 1880, produced one son, Edward, later mayor of Oklahoma City, and a daughter, Elizabeth. Within six months of arriving in Oklahoma City, Overholser married eighteen-year-old Anna Ione Murphy, daughter of Samuel Murphy, prominent lawyer and first Oklahoma territorial treasurer. Their union produced one daughter, Henry Ione (1905–59), who married David Perry. In 1902 Overholser purchased three lots in Classen's Highland Park Addition (now generally known as Heritage Hills) and built a twenty-room, brick-and-stone, Victorian mansion. The lavish opening of the home in the spring of 1904 was the highlight of the social season, and Mrs. Overholser remained the grand dame of Oklahoma City society until her death. The Overholser Mansion, at 405 Northwest Fifteenth Street, listed in the National Register of Historic Places in 1970 (NR 70000586) is now a property of the Oklahoma Historical Society and is open to the public.

While on a tour of Europe in 1911, Overholser suffered a stroke. He lingered as an invalid until his death on August 25, 1915. Truly one of the founding fathers of Oklahoma City, Henry Overholser exemplified the pioneering spirit of the Eighty-niners.

Berlin B. Chapman, "Petitioners for the Incorporation of Oklahoma City, 1890," The Chronicles of Oklahoma 36 (Spring 1958).

Susanne W. Peterson, "The Spirit of Heritage Hills," The Chronicles of Oklahoma 48 (Spring 1970).

The following (as per The Chicago Manual of Style, 17th edition) is the preferred citation for articles:
Dianna Everett, “Overholser, Henry,” The Encyclopedia of Oklahoma History and Culture, https://www.okhistory.org/publications/enc/entry.php?entry=OV003.