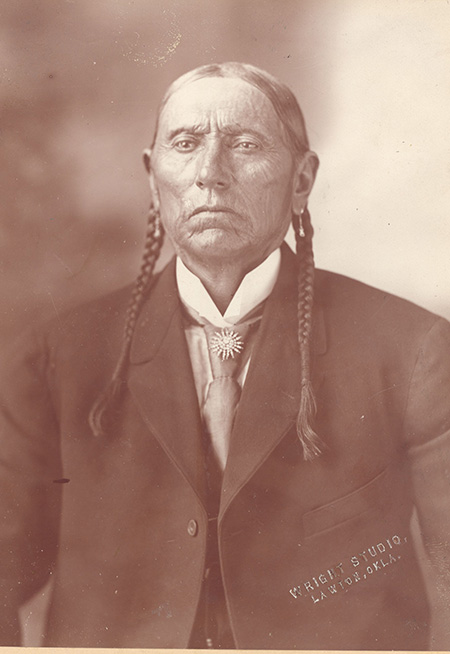 A Comanche warrior and political leader, Quanah Parker served as the last official principal chief of his tribe. He was the son of Peta Nocona, a Comanche chief, and Cynthia Ann Parker, a white captive of the Comanches. Little is known for certain about him until 1875 when his band of Quahada (Kwahada) Comanche surrendered at Fort Sill as a result of the Red River War. He had established a reputation as a warrior but was probably too young to have had much influence. After the Quahada surrendered, Col. Ranald S. Mackenzie and Indian agent James M. Haworth began to work through Parker in settling the Comanche on a reservation in Indian Territory. This preferment and his own ability soon enabled Parker to rise to paramount influence within his tribe and in dealings with whites.

Parker walked a fine line between being a "progressive" and living within Comanche culture and was generally successful in so doing. He advocated leasing pastureland to white ranchers, and he served as a judge when the federal government implemented courts for Indian offenses. At the same time he continued to wear his hair in the traditional braids and engaged in polygamy, having as many as five wives at one time. He opposed the ghost dance religion but was a strong advocate of the peyote cult associated with the Native American Church.

By the time of his death Parker had attained celebrity status. Visitors to southwest Oklahoma, including Pres. Theodore Roosevelt, made it a point to call on him, and he was in demand to ride in parades. Although his dealings with whites, especially with Texas cattlemen, sometimes raised suspicions about his motives, he was genuinely dedicated to the welfare of his people. Parker died February 23, 1911, and was buried at Fort Sill. Star House, his residence near Cache, Oklahoma, was listed in the National Register of Historic Places in 1970 (NR 70000532).

The following (as per The Chicago Manual of Style, 17th edition) is the preferred citation for articles:
Michael D. Pierce, “Parker, Quanah,” The Encyclopedia of Oklahoma History and Culture, https://www.okhistory.org/publications/enc/entry.php?entry=PA014.