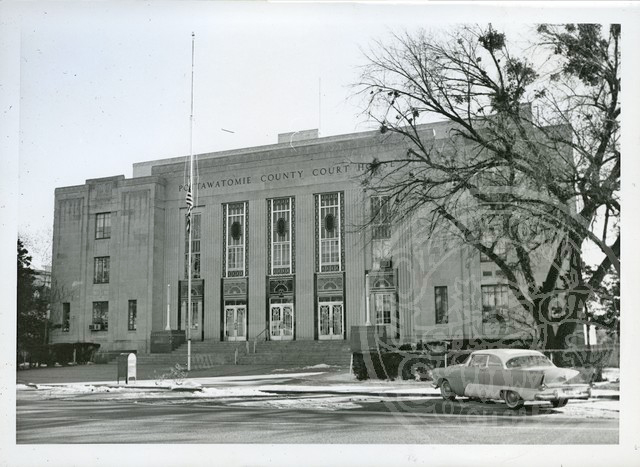 Bordered by Lincoln County to the north, Okfuskee and Seminole counties to the east, Pontotoc and McClain counties to the south, and Cleveland and Oklahoma counties to the west, Pottawatomie County is situated in east-central Oklahoma. The county encompasses 793.26 square miles of total land and water area and is drained by the North Canadian, Canadian, and Little rivers. Most of the county lies in the Sandstone Hills physiographic region. In 2010 the incorporated towns included Asher, Bethel Acres, Brooksville, Earlsboro, Johnson, Macomb, Maud, McLoud, Pink, St. Louis, Shawnee (the county seat), Tecumseh, Tribbey, and Wanette.

Pottawatomie County's prehistory is represented by sixty-six known archaeological sites. Forty-three have been identified to time period. Three sites relate to the Paleo period (prior to 6000 B.C.), twenty-six to the Archaic period (6000 B.C. to A.D. 1), five to the Woodland period (A.D. 1 to 1000), and nine to the Plains Village period (A.D. 1000 to 1500). Representative of the Woodland period is the Rose-Fast site, excavated in 1985.

During the 1820s and 1830s several explorers made their way through the area, including Stephen H. Long, Washington Irving, and the Leavenworth-Dodge Expedition of 1834. Pottawatomie County was carved out of land originally given to the Creek and Seminole. When the Five Tribes were forced to cede their lands after the Civil War, the Iowa, Sac and Fox, Absentee Shawnee, Citizen Band Potawatomi, and Kickapoo received lands in present Pottawatomie County. In the nineteenth century this area was crossed east-west by the northern branch of the California Road and north-south by the West Shawnee Cattle Trail.

In 1871 the Quakers (Society of Friends) established the first mission in the area, two miles south of present Shawnee. The Shawnee Friends Mission, established to minister to the religious and educational needs of the Absentee Shawnee, is listed in the National Register of Historic Places (NR 73001569). The Benedictine Order of the Roman Catholic Church began a ministry among the Potawatomi in the southern part of the county in 1876, establishing Sacred Heart Mission. Ultimately, the Benedictines founded two schools for American Indian children: an abbey and a college. St. Gregory's College opened in Shawnee in 1915 as a two-year institution, and the abbey moved to Shawnee in 1929. The original Sacred Heart site fell into disuse.

White settlement began in earnest with the land run on September 22, 1891. The run was organized after all the tribes, except the Kickapoo that had settled in the area, agreed to land allotment. The run for land in County B (Pottawatomie County) occurred at the same time as the run in County A (Lincoln County) to the north. The run for Tecumseh, the designated county seat of Pottawatomie County, was held a day later, because the site had not yet been platted. Supposedly, only one fatality occurred during the run: a man was trampled to death as he dismounted to stake his claim. A band of entrepreneurs, including Alfred B. Beard, Henry G. Beard, John W. Beard, James T. Farrall, and Etta B. Ray (who married Henry Beard), staked claims on land that became Shawnee. When the Kickapoo gave up their land rights in 1895, the northwestern portion of the county was added in the last land run in Oklahoma. In 1892 voters overwhelmingly adopted Pottawatomie as the county name in honor of the Potawatomi.

Although Tecumseh, with its central location in the county, was established as the county seat, Shawnee vied for the designation on several occasions. The Choctaw, Oklahoma and Gulf Railroad, which became part of the Chicago, Rock Island and Pacific Railway, ran its line through Shawnee in 1895 and located its divisional shops (area-wide servicing facilities) in the city in 1896. The Atchison, Topeka and Santa Fe Railway built a line through Shawnee in the early twentieth century and established a maintenance shop in the city. Consequently, Shawnee grew more rapidly than Tecumseh. Tecumseh built a courthouse and jail in 1897, but that did not assure the city of retaining the county seat. After Tecumseh thwarted Shawnee's aspirations for moving the county government in 1909 and 1911 elections, Shawnee prevailed in a 1930 vote. Shawnee had even greater aspirations. The citizens hoped Shawnee would become the state capital, and they built a governor's mansion. However, Shawnee finished a distant third in the 1919 vote to relocate the capital.

In addition to the railroad shops, the county's economy rested on agriculture, oil, and liquor for the first fifty years of its existence. Cotton was the primary cash crop, followed by potatoes, truck gardens, and orchards. By the 1930s pecans and alfalfa were important crops as well. Before 1907 statehood and statewide prohibition, cities such as Keokuk and Corner did a thriving business selling liquor to residents of the contiguous Indian Territory, which was dry. In the 1920s the county profited from the oil boom, as oil fields were developed in Earlsboro and St. Louis in 1926 and Asher in 1929.

In 1997 Pottawatomie County ranked eleventh in the state in retail sales, with 276 establishments and $397 million in sales. At the turn of the twenty-first century the top three areas of employment were manufacturing with 4,257 employees and an annual payroll of $131 million, retail sales with 3,129 employees and $46 million annual payroll, and health care and social assistance with 2,680 employees and $60 million annual payroll. Although a number of manufacturing companies had located in Shawnee and Tecumseh, agriculture remained important to the county's economy. At the turn of the twenty-first century Pottawatomie County had 48,500 acres planted in hay, 20,000 acres in wheat, and 4,500 acres in soybeans. The county had 1,448 farms, averaging 232.37 acres.

The county is served by Interstate 40, U.S. Highway 177, and several state highways. Two institutions of higher education, Oklahoma Baptist University and St. Gregory’s University, have served the community; St. Gregory's closed in 2017. The Gordon Cooper Technology Center is located in Shawnee, as is the Mabee-Gerrer Museum of Art. The Pottawatomie County Historical Society's museum is in the former Santa Fe Depot in downtown Shawnee. The Potawatomi Tribal Museum is also located in Shawnee. Well-known residents of Pottawatomie County include athlete Jim Thorpe, astronaut Leroy Gordon Cooper, Jr., designer of the state flag Louise Fluke, country and western recording artists Wanda Jackson and Wade Hayes, and novelist Tony Hillerman. At the turn of the twenty-first century, Pottawatomie County's population stood at 65,521. In2010 it was 65,055, of whom 76.3 percent were white, 12.9 percent American Indian, 2.9 percent African American, and 0.6 percent Asian. Hispanic ethnicity was identified as 4.1 percent. The county's towns served as "bedroom" communities for the Oklahoma City metropolitan area.

The following (as per The Chicago Manual of Style, 17th edition) is the preferred citation for articles:
William H. Mullins, “Pottawatomie County,” The Encyclopedia of Oklahoma History and Culture, https://www.okhistory.org/publications/enc/entry?entry=PO026.