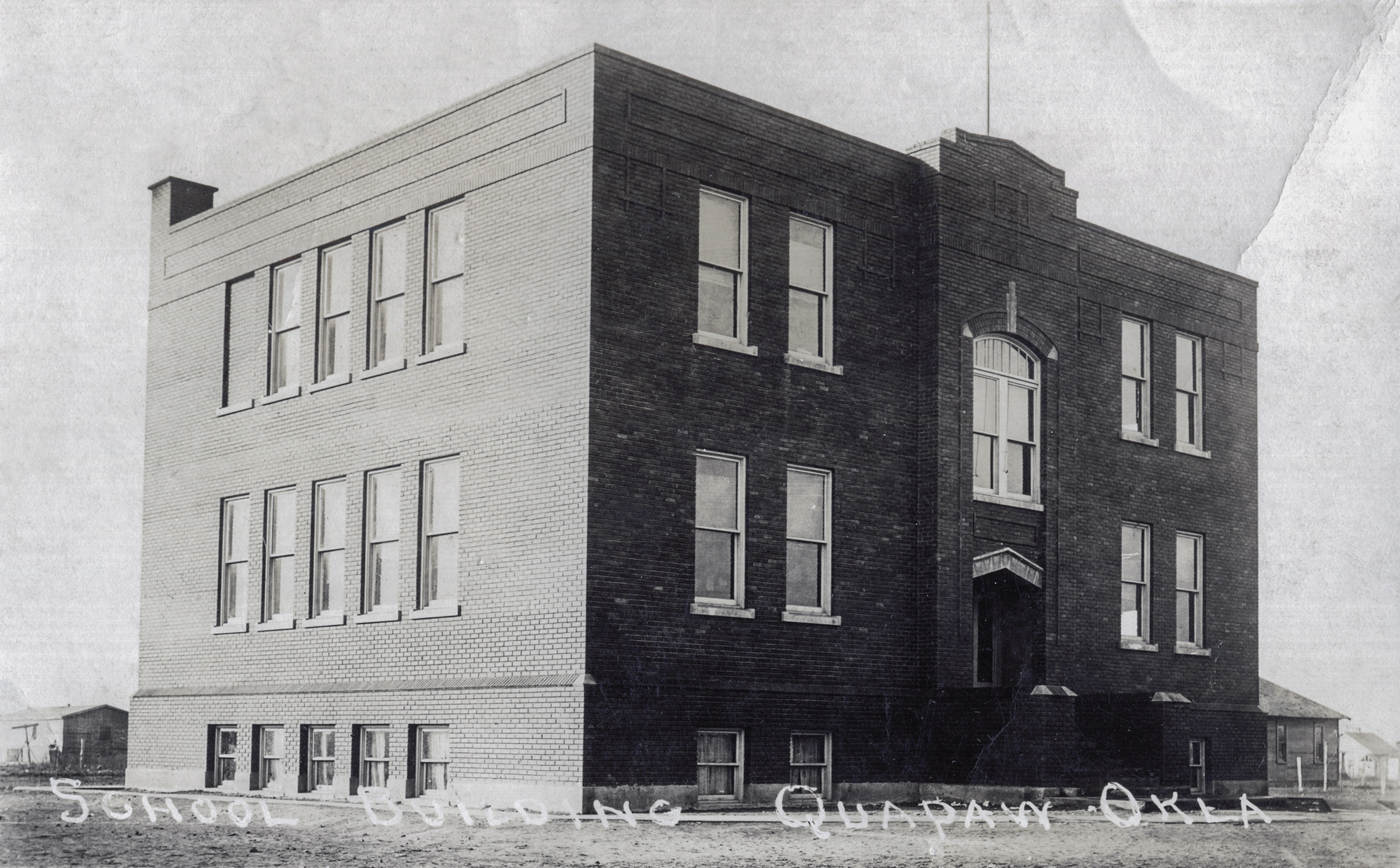 Located in Ottawa County, Quapaw is nine miles northeast of Miami, the county seat, on U.S. Highway 69A (formerly U.S. Highway 66), in the very northeastern part of the county. Quapaw is the last town on 69A in Oklahoma before the road enters Kansas. Three farsighted men were largely responsible for the community's development, Quapaw Chief John Quapaw, A. W. Abrams, and Isaac "Red Ike" Bingham. In 1891 Bingham, a farmer from Kansas, moved to the area and later convinced cousins and other family members to join him and open various businesses. Chief Quapaw donated land for a school.

In 1896 the Kansas City, Fort Scott and Memphis Railroad put a stop nearby, and from that point farmers were soon shipping one thousand cars or more of hay, corn, and flax east. Eventually Quapaw became known as "the Hay Capital." In 1897 the first post office was established in one corner of a small grocery store.

Leaders of the small settlement platted "New Town Quapaw," located east of the old town, on land purchased from Harry Whitebird. In 1917 "new" town was incorporated as the town of Quapaw. Following the discovery of lead and zinc in surrounding areas, mining operators and thousands of miners moved to the region. Red Ike Bingham built the Palace Theater, a Masonic Hall, and the three-story Gateway Hotel. There were drug stores, banks, a casket factory, a Nehi Bottling Company, cafes, barbers, the Looboyle Refining Company, a Ford agency, service stations and Quapaw Zinc Products, manufacturers of zinc-faced washboards. The first official census for Quapaw, taken in 1920, reported a population of 1,394, which declined to 1,054 by 1940. The Quapaw Mining Herald, the Quapaw World, Quapaw Chieftan, and the Ottawa County Beacon have reported the news.

With the advent of the automobile came the need for good roads. In the 1920s Cyrus Avery helped to develop U.S. Highway 66, "The Main Street of America," linking Los Angeles and Chicago. In March 1933 Quapaw celebrated the completion of this highway's paving in Ottawa County, with Quapaw Chief Victor Griffin laying a zinc tablet in the center of the town's Main Street to commemorate the event. Thereafter the trip from eastern Oklahoma to Chicago followed a continuous paved road. More than five thousand people, including Avery, crowded the streets for the ceremony.

As mining began to play out, the population dwindled drastically, reaching a census low of 850 in 1960. In the 1940s Burggraf Tire was established and at the beginning of the twenty-first century still thrived. In 2003 residents supported six churches, one convenience store, a grocery store, two cafés, a bank, and an antique shop.

During the annual Fourth of July celebrations the Quapaw Tribe hosts one of the state's oldest powwows. The event began as a tribal picnic, and later other tribes in the area participated. The Ponca brought their Big Drum, replacing the Quapaw's smaller Water Drum. In 2003 forty-five tribes from seventeen states gathered for dance competitions, games, and food. One of the most popular traditional competitions was a women's fancy dance. Discontinued in the 1970s this dance was later reinstated and became one of the favorite events for both the dancers and spectators. The four-day intertribal event, free to the public, is held on Quapaw Tribal Grounds, just southeast of Quapaw. In 1991 the John Patrick McNaughton Barn (NR 91001903) was listed in the National Register of Historic Places. In 2000 Quapaw's population stood at 984, and the 2010 census counted 906 residents.

The following (as per The Chicago Manual of Style, 17th edition) is the preferred citation for articles:
Mickey Johnson, “Quapaw (town),” The Encyclopedia of Oklahoma History and Culture, https://www.okhistory.org/publications/enc/entry.php?entry=QU004.