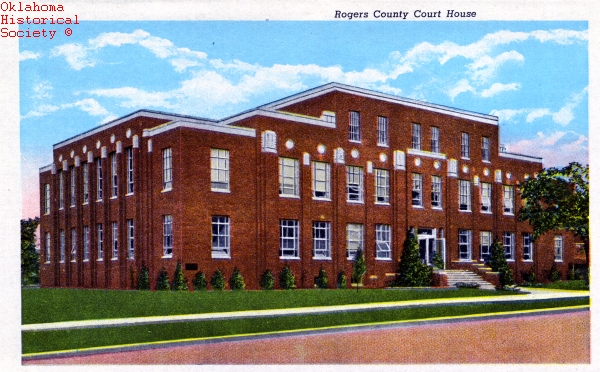 A 1981 archaeological survey identified sixty-two prehistoric sites in Rogers County. The Arkansas Band of Osage (so called because of their proximity to the Arkansas River) settled in the Three Forks area during the 1760s. They established two villages, Pasuga and Pasona, in Rogers County. The latter was situated near a mound along the Verdigris River. Called Claremore Mound in honor of Chief Claremore (Gra-mo'n or Arrow Going Home), it provided a natural fortification.

Cherokee were hunting and settling in the Osage domain by 1800. The Osage considered the Cherokee intruders. For many years raids and retaliations occurred. In 1817 a treaty with the United States granted the Western Cherokee a homeland between the Arkansas and White rivers in Arkansas. That same year the Osage-Cherokee conflict reached a climax at the Battle of Claremore Mound. Western Cherokee helped by Delaware, Choctaw, Shawnee, and others attacked Pasona. Approximately eighty-three Osage men, women, and children were killed.

In 1828 the Western Cherokee exchanged their Arkansas land for a new home in present northeastern Oklahoma, including Rogers County (the Osage had ceded the region to the United States in 1825). Members of the Cherokee Nation East began settling in the area after the Treaty of New Echota (1835). At first settlement was sparse, but by 1838 many Cherokee had settled in what became the Saline District of the Cherokee Nation, Indian Territory. Through the 1840s and 1850s pioneers, both white and Indian, moved into the district and began to cultivate the land. In 1856 the Cooweescoowee District was created from the western Saline District and included present Rogers County.

The Cooweescoowee District provided several political leaders for the Cherokee government. Most notably, Clement Vann Rogers who came to the area in 1856. Rogers, the father of Will Rogers, was a successful mixed-blood Cherokee rancher and trader who became active in tribal affairs. He served the nation as a legislator, a judge, a member of school boards, at the 1906 Constitutional Convention, and worked with the Dawes Commission. His fairness and concern made him popular and influential. Rogers County was created at the Constitutional Convention and designated Cooweescoowee County. But after protests from residents, the name was changed to Rogers County in honor of Clement Rogers. Claremore was selected as the county seat, and work on the present Rogers County Courthouse began in 1937.

The county's major lake and streams are Oologah Lake and the Verdigris and Caney rivers. However, there are numerous creeks and small lakes throughout. From earliest settlement the prairie grasses and abundance of water provided excellent cattle ranching conditions. By the late 1800s farming had become prominent. The climate and topography were suitable for a variety of crops, including corn, cotton, and wheat. Agriculture, especially livestock raising, remains a main source of income.

In 1903 prospectors who were drilling for oil or natural gas instead discovered artesian wells. The mineral water in them had a bad smell but was believed to have healing properties. The treatments were cheap and were endorsed by the railroads. A 1904 St. Louis and San Francisco Railway pamphlet proclaimed the healing powers of area spas. Before their popularity declined, the mineral baths benefited the county's economy and encouraged growth.

Other economic activities contributed to the county's development. Coal was first mined in 1890. Usually forty to seventy feet below the surface, the coal was strip-mined. It was of sufficient quality for use as coke. Today the county is experiencing land reclamation, turning old mines into pastures or ponds. Petroleum and natural gas production along with manufacturing are major contributors to the present economy. Beginning in the 1970s tourism provided economic expansion. Attractions include Will Rogers State Park northeast of Oologah and the Will Rogers Memorial Museum in Claremore. Other sites are the Totem Pole Park east of Foyil and Claremore's Radium Town and the J. M. Davis Arms and Historical Museum. Educational institutions are the North East Vo-Tech Center near Claremore and Rogers State University in Claremore, originally the Oklahoma Military Academy. At the turn of the twenty-first century sixteen county properties are listed in the National Register of Historic Places.

Rail and water transportation are important to Rogers County. In 1882 the St. Louis and San Francisco Railway constructed a line spanning the county from the northeast to southwest, stopping at the present site of Catoosa. The Burlington Northern Santa Fe Railway currently operates the route. In 1889 the Kansas and Arkansas Valley Railway laid tracks through the county from the southeast corner to the north. In 1909 it was sold to the St. Louis, Iron Mountain and Southern Railway and is presently operated by the Union Pacific Railway. The Tulsa Port of Catoosa is at the head of the McClellan-Kerr Arkansas River Navigation System. The two-thousand-acre complex is one of the nation's largest inland ports and employs more than twenty-five hundred people.

The following (as per The Chicago Manual of Style, 17th edition) is the preferred citation for articles:
Sarah C. Thomas, “Rogers County,” The Encyclopedia of Oklahoma History and Culture, https://www.okhistory.org/publications/enc/entry.php?entry=RO019.