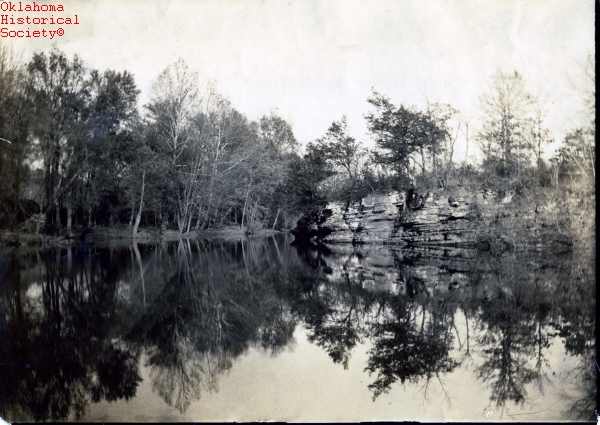 In extreme eastern Oklahoma, Sequoyah County is named for the Sequoyah District of the Cherokee Nation and for Sequoyah (George Guess), who invented a syllabary (alphabet) that brought literacy to the Cherokee in the early nineteenth century. The county abuts Arkansas and Fort Smith, prominent in frontier and Indian history, on the east, and borders Adair and Cherokee counties on the north, Muskogee County on the west, Haskell County on the southwest, and Le Flore County on the south. In 2010 Sequoyah County's incorporated towns included Gans, Gore, Marble City, Moffett, Muldrow, Paradise Hill, Roland, Sallisaw (the county seat), and Vian.

Sequoyah County straddles the Ozark Plateau in the north and Ouachita Mountains region in the south. The Arkansas River forms the southern border and reduces land to bayous, sloughs, and "bottoms." The county also shares characteristics of the Prairie Plains. Other waterways include the Illinois River, Lee's Creek, and Robert S. Kerr Lake. Local features include the Cookson Hills to the northwest and Moffett, Paw Paw, and Redland bottoms to the south. The county includes 714.88 square miles of land and water.

The majority of the archaeological sites, forty-one, date to the Archaic Period between 6,000 B.C. and A.D. 1. The Plains Village Period (A.D. 1000 to 1500) is also well represented with thirty-five sites. The Horton Site is indicative of a farming village related to the Spiro Mound culture and dated to A.D. 1300 to 1450 in the Plains Village period.

The county's modern political history begins with French traders who left place-names including Sallisaw, the county seat. The Spanish ostensibly controlled the area from the late eighteenth century to 1800. The French regained dominance until the Louisiana Purchase in 1803 when the land fell under supposed control of the United States and became the region to which the Southeastern Indians would be removed.

Sequoyah County was part of Lovely's Purchase, a controversial acquisition of territory in 1816 from the Osage for Arkansas Cherokees who came west before removal. Part of Arkansas Territory's Lovely County in 1827, the area became part of the Western Cherokee Nation in 1829 when Cherokees in Arkansas, and with them, Dwight Mission, were removed to Indian Territory. The Christian mission was reestablished on Sallisaw Creek, eleven miles northeast of Vian, and it continued there under the Presbyterian Church (USA) in 2005.

While under authority of the Cherokee Nation, the area first called Skin Bayou District changed to Sequoyah District in 1851. Present Sequoyah County also comprises part of the old Illinois District. Early Cherokees (Old Settlers) established the first capital, Tahlonteeskee (Tahlontuskey), operative from 1829 to 1839 near the mouth of the Illinois River, near present Gore. Tahlonteeskee remained a meeting place for Old Settlers as Cherokee government and the Cherokee center of gravity shifted to Tahlequah. During the Civil War the area near Webbers Falls (in present Muskogee County) was a hotbed of sympathy for the Confederacy, fueled by the stealthy successes of Stand Watie, a Cherokee and a Confederate colonel (later a brigadier general). However, the only significant Civil War action in present Sequoyah County was Watie's notorious June 15, 1864, capture of the steamboat J. R. Williams by attacking from Pleasant Bluff, at present Tamaha in Haskell County. The steamboat ran aground on the north side of the Arkansas River, and Watie and his men looted it, enlivening the Southern cause.

Between the Civil War (1861–65) and 1907 statehood, proximity to Fort Smith made the area especially susceptible to intruders, illegal residents. Three mostly white communities near the Arkansas border, Paw Paw, Cottonwood, and Muldrow, were almost entirely inhabited by intruders, although citizenship disputes in Cherokee and federal courts persisted through the turn of the twentieth century. Intrusion and intermarriage among Cherokees, whites, and African Americans contributed to cultural undercurrents that lasted into the twenty-first century. Cherokee courts operated but after the Civil War had no jurisdiction over U.S. citizens living in Indian Territory, which complicated the intruder issue. The area fell under federal judicial districts headquartered at Van Buren and Fort Smith in Arkansas and, after 1889, in Muskogee.

At 1907 statehood Sequoyah County had 22,499 residents. The first railroad arrived a generation earlier, in 1888–90 when the Kansas and Arkansas Valley Railway laid tracks westward from near Van Buren, Arkansas. In 1909 the St. Louis, Iron Mountain and Southern Railway bought the line, and in 1917 the Missouri Pacific Railroad took possession. In 1895–96 the Kansas City, Pittsburg and Gulf Railroad constructed a north-south line through the present county. In 1900 the Kansas City Southern Railway Company purchased this line. State Highway 1, formerly the Albert Pike Highway, which extended west from Fort Smith, traversed the county east to west. In 1926 the Joint Board of State Highway Officials proposed the federal highway system and designated this road as U.S. Highway 64, the county's first national road. Interstate 40, laid in 1964–69, remained the sole modern interstate highway in 2005. Sallisaw Municipal Airport accommodated air travel with a runway of four thousand feet. Water transportation, with access to the Mississippi River and Gulf of Mexico, was at Kerr Lock and Dam on the Arkansas River, nine miles south of Sallisaw.

In addition to Sequoyah, prominent residents included Charles Arthur "Pretty Boy" Floyd, who spent his early years near Hanson in the 1910s and was buried in Akins. Country recording artist Cal Smith, known for tunes such as "The Lord Knows I'm Drinking" (1972) and "Country Bumpkin" (1974), was born in Gans in 1932. Also from Gans is Bryant "Big Country" Reeves, All-American basketball player for Oklahoma State University in the early 1990s. The seven-foot center later played for the Vancouver (Canada) Grizzlies but in 2001 returned to Gans. Shawntel Smith, from Muldrow, was crowned Miss America in 1995 and promoted school-to-work programs during her reign.

Early-twenty-first century challenges for Sequoyah County residents included rampant methamphetamine manufacture, trade, and use. These circumstances have been exacerbated by the area's romantic view of outlaw culture, an attitude that lingers from lawless Indian Territory days, the moonshine era, and the influence of "Hanging Judge" Isaac Parker, the notorious federal judge in Fort Smith whose jurisdiction included the area.

Craig Miner, The Corporation and the Indian: Tribal Sovereignty and Industrial Civilization in Indian Territory, 1865–1907 (Norman: University of Oklahoma Press, 1976).

The following (as per The Chicago Manual of Style, 17th edition) is the preferred citation for articles:
Richard Mize, “Sequoyah County,” The Encyclopedia of Oklahoma History and Culture, https://www.okhistory.org/publications/enc/entry?entry=SE022.