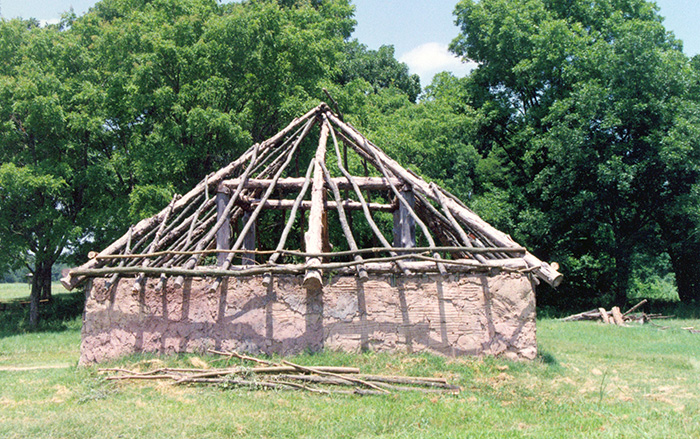 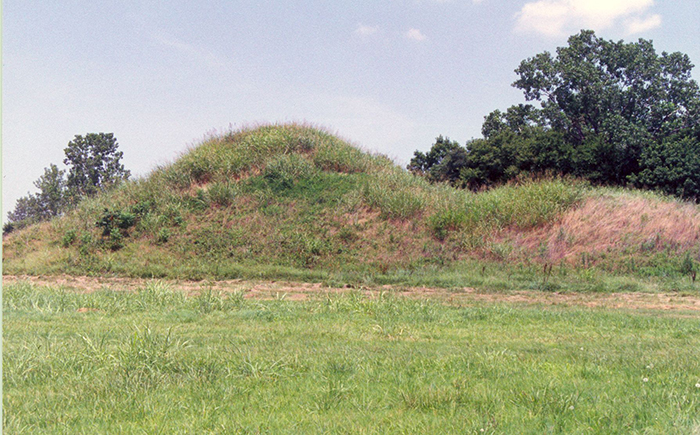 One of Oklahoma's most important prehistoric American Indian sites, Spiro Mounds is located in Le Flore County on the southern bank of the Arkansas River about fifteen miles from Fort Smith, Arkansas. The Spiro Mounds site grew from a small farming village to one of the most important centers in what later became the United States. Between A.D. 850 and 1450 twelve mounds, ceremonial areas, and a support city were eventually created for the Caddoan-speaking leadership who participated in the Mississippian Culture (also known as the Southeastern Ceremonial Complex, the Southern Death Cult, and the Buzzard Cult).

The Mississippian Culture was a loosely organized trading, religious, and political system that included the leadership from many language groups and several million people. This confederation had trade connections stretching from the Rocky Mountains to the Virginia coast and from the Gulf Coast of Florida to the Great Lakes. Each group was more or less independent although tied to the four regional mound centers. These regional mound centers included Cahokia, where East St. Louis is now, Moundville in Alabama, Etowah in Georgia, and Spiro in eastern Oklahoma.

The twelve mounds of the Spiro Mounds complex, all of human origin, were constructed in layers from basket loads of dirt. Three types of mounds were built at the Spiro Mounds site: one burial mound, two temple mounds, and nine house mounds. While most of the mounds were for buildings to be placed upon or to cover old houses, the single burial mound attracted the most attention.

The Spiro Mounds site is world renowned for the incredible amount of art and artifacts dug from the Craig Mound, the site's only burial mound. From the 1870s Choctaw and Chickasaw freedmen farmed the land within the complex, but the mounds remained undisturbed until 1917. At that time, Joseph Thoburn, who had taken photographs of the site in 1914, tested Ward Mound One, a buried house mound. The landowners discouraged further work until 1933 when commercial diggers calling themselves the Pocola Mining Company acquired the lease for the Craig Mound. From 1933 until 1935 Pocola employees dug haphazardly into the burial mound. During two years the commercial diggers destroyed about one-third of the mound and sold thousands of artifacts, made of stone, copper, shell, basketry, and fabric, to collectors throughout the world. Dubbed the "King Tut of the Arkansas Valley" by the Kansas City Star in 1935, the site yielded artifacts in greater numbers, in better preservation, and showing more elaborate, artistic, sophisticated decoration than any other Mississippian site. Continuing destruction convinced the Oklahoma Legislature to pass a licensing requirement for the protection of the site, and in November 1935 the Pocola Mining Company was finally shut down.

In 1936 the University of Oklahoma (OU) began scientific excavation of what remained of the burial mound. From June 1936 until October 1941 OU archaeologists oversaw Works Progress Administration (WPA) workers in systematically investigating the Spiro Mounds site. From the Craig Mound more than six hundred complete or partial burials were recovered along with thousands of artifacts. The OU and WPA crews also worked on the other eight mounds recognized at the time. All of these structural mounds were researched, although they still have some portions intact. In 1941 the University of Oklahoma ended the excavations because of World War II and the demise of the WPA.

The following (as per The Chicago Manual of Style, 17th edition) is the preferred citation for articles:
Dennis A. Peterson, “Spiro Mounds,” The Encyclopedia of Oklahoma History and Culture, https://www.okhistory.org/publications/enc/entry.php?entry=SP012.