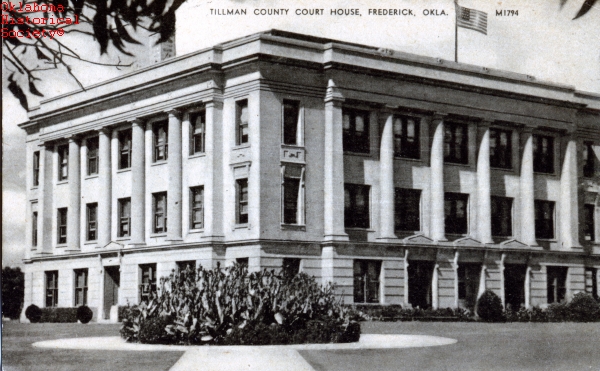 Located in southwestern Oklahoma, Tillman County was organized at 1907 statehood from a portion of Comanche County. Frederick is the county seat. Tillman County's boundaries changed in 1911 and 1924 when portions of Kiowa County were added. Named for U.S. Sen. Benjamin R. Tillman of South Carolina, Tillman County is bounded by Kiowa County on the north, Comanche and Cotton counties on the east, Jackson County on the west, and the Red River (Texas) on the south. Lying within the Red Bed Plains physiographic region (a subregion of the Osage Plains), Tillman County has 879.21 squares miles of land and water. It is drained by the North Fork of the Red River, Otter Creek, and Deep Red Creek.

According to a 1981 survey report Tillman County has forty-one known archaeological sites. Of those reported, only one had been tested. However, through their investigations of the area scientists suspect activity during the Archaic (6000 B.C. to A.D. 1) and Plains Village (A.D. 1000 to 1500) periods. In the 1600s Spaniards were the first Europeans to arrive, using the Great Spanish Road that paralleled the North Fork of the Red River.

In 1803 the United States purchased from France the Louisiana Purchase, which included the future state of Oklahoma. Expeditions were formed to explore the area. In southwestern Oklahoma, in 1852 Randolph B. Marcy headed one of those excursions in search of the headwaters of the Red River. Due to American Indian unrest in the area, Camps Radziminski and Augur were established in 1858 and 1871, respectively. In 1867 the Medicine Lodge Treaty created a reservation for the Kiowa, Comanche, and Apache (KCA) in southwestern Indian Territory. By the 1880s prominent Texas ranchers Daniel and William Thomas Waggoner and Samuel Burk Burnett leased grazing lands from those tribes.

In 1892 the Jerome Commission began enrolling the Kiowa, Comanche, and Apache in preparation for the opening their reservation to non-Indian settlement. On August 6, 1901, a lottery was held to open those lands, and in December 1906 the area known as the Big Pasture was made available to non-Indian settlers. After the 1901 lottery the towns of Texowa (renamed Olds and finally Davidson in 1902), Gosnell (became Frederick in 1902), Manitou, and Siboney sprang into existence. Eschiti and Kell City (merged to become Grandfield), Harriston (became Loveland), Hollister, Isadore, Parton, and Quanah developed after 1906. In 2010 Davidson, Frederick (the county seat), Grandfield, Hollister, Loveland, Manitou, and Tipton continued as incorporated towns.

At 1907 statehood Frederick was designated as the county seat. Until a courthouse was built, county officials rented space in several buildings and in city hall. The courthouse was designed by the architectural firm of Tonini and Bramblett, and Charles M. Dunning Construction Company began work on the new building in 1921. The Tillman County Courthouse is listed in the National Register of Historic Places (NR 84003455).

A majority of Tillman County's industries have supported farmers. By 1930 thirty-one cotton gins, six cotton oil mills, and six grain elevators operated. At that time an oil and gas refinery was located in Grandfield. In 1941 the Frederick Army Air Field opened. Cadets received training on UC-78s (trainer/light transport aircrafts) and B25s (medium bombers). The field was later developed into the Frederick Industrial Park. Relocating from New York City, the Centra Leather Goods company came to Frederick in 1955. In 1971 the Kellwood Plant in Frederick produced children's jeans. At the turn of the twenty-first century only two manufacturing firms reported that they employed more than fifty individuals.

Waterways and American Indian trails formed the earliest transportation routes. After the 1901 and 1906 land openings railroads connected the recently established towns with outside markets. In 1901 the St. Louis and San Francisco Railway constructed a line from Texas north across the Red River to Davidson. Between 1901 and 1903 the Blackwell, Enid and Southwestern (BES) Railroad (later acquired by the St. Louis and San Francisco Railway) built a line from Darrow (in Blaine County) traversing south through Manitou and Frederick. In 1907 the Wichita Falls and Northwestern Railway (later the Missouri, Kansas and Texas Railroad) connected Grandfield, Loveland, Hollister, Frederick, and Tipton. Motorists used U.S. Highways 70 and 183 as well as State Highways 5, 5C, 36, and 54. Municipal airports operated near Frederick, Grandfield, and Tipton.

Education was important at an early date. Settlers built one-room and two-room schoolhouses. In Manitou a three-month subscription school operated in the winter months of 1902–03. In 1906 Frederick had a kindergarten sponsored by the Mothers' Culture Club. Between 1938 and 1942 the Tillman County Junior College offered higher education. At the turn of the twenty-first century education was offered at public schools in Tipton, Frederick, Grandfield, and Davidson.

A well-publicized event occurred in April 1905. Pres. Theodore Roosevelt, accompanied by John R. Abernathy and others, departed from Frederick to the Big Pasture to participate in a wolf hunt. At the turn of the twenty-first century the Tillman County Historical Museum (Pioneer Heritage Townsite Center) offered buildings and artifacts relating to local history. An annual Oklahoma Cotton Festival was held in Frederick in September. Outdoor enthusiasts enjoyed a primitive camping area at Hackberry Flat Wildlife Management Area and fishing at Lake Frederick. In addition to the courthouse in Frederick, the J. D. Laney House (NR 84003441) and the Ramona Theater (NR 84000377) were listed in the National Register of Historic Places. Grandfield's historic places included the Grandfield Downtown Historic District (NR 02000656), the William and Mabel Donahoo Hubbard House (NR 91000310), the Humphreys Drugstore Building (NR 92000797), the Rock Island Depot Building (NR 96000978), and the Tillman County Bank of Grandfield (NR 92000796).

The following (as per The Chicago Manual of Style, 17th edition) is the preferred citation for articles:
Linda D. Wilson, “Tillman County,” The Encyclopedia of Oklahoma History and Culture, https://www.okhistory.org/publications/enc/entry?entry=TI003.