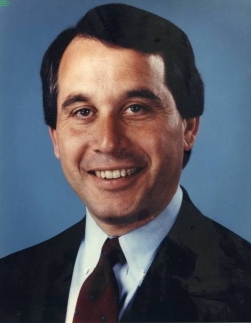 Oklahoma Democrats regained control of the Governor's Mansion in 1990 with the election of David L. Walters, who carried seventy-five of the state's seventy-seven counties in the general election. He was born November 20, 1951, near Canute, Oklahoma, raised on a small cotton and wheat farm, and graduated as valedictorian of Canute High School in 1969. A few months later he met Rhonda Smith of Elk City. They were married in 1971 and had four children, Shaun, Tanna, Kristen, and Elizabeth. Walters earned an industrial engineering degree from the University of Oklahoma and a master's degree in business administration from Harvard University.

Walters began his professional career as an administrator at the University of Oklahoma and then entered private business as head of two real estate companies. Gov. George P. Nigh asked him to serve as co-chair of the one-hundred-member Commission on Government Reform in 1984 and later appointed him to serve on the Oklahoma Human Services Commission.

Walters failed in his first bid for the governor's office in 1986, losing to Republican Henry Bellmon after winning the Democratic nomination. In 1990 Walters campaigned on a platform of no new taxes without public approval, his promise to run state government like a business, his support for term limits, and his support for education reforms. Walters's election signaled a desire of the public to elect a real outsider. Since the election of Robert S. Kerr nearly a half-century before, no other governor had been chosen who had not previously held elective public office.

Tragedy struck the Walters family when son Shaun died in December 1991. An overdose of prescription medication came after heavy press coverage of a police search in Shaun's Norman apartment that uncovered a single seed thought to be marijuana, an assumption overturned later by law enforcement tests. The family was devastated, and all Oklahomans mourned the loss. Shaun's death changed Governor Walters's outlook on political life. Asked if he would run for governor if he had it to do all over again, Walters replied, "No, I would not. I lost my son because I ran for public office."

In order to honor the memory of their late son and children of all Oklahoma governors, the Walters commissioned in 1994 a bronze sculpture to be placed on the Governor's Mansion grounds to honor children of past, present, and future Oklahoma governors. The red granite base of the sculpture includes the names of all the children of Oklahoma chief executives. The youngest Walters daughter, Elizabeth, was a model for the girl, and the boy in the sculpture was modeled after Shaun. Private donations, assisted by former governors Boren and Nigh, funded the fifty-thousand-dollar sculpture by Lena Beth Frazier of Norman.

After three years of investigation of alleged campaign contribution irregularities and "fearing that the continued negative attacks could further damage his family," Governor Walters asked prosecutors what they wanted to end the process. An agreement was reached that the governor would plead guilty to a misdemeanor offense and pay a fine and the record would be expunged in twelve months. Walters claimed his innocence but said it was in the best interest of the state and his family to accept the plea agreement. Walters did not run for reelection in 1994 and entered the international independent power business.

The following (as per The Chicago Manual of Style, 17th edition) is the preferred citation for articles:
Bob Burke, “Walters, David Lee,” The Encyclopedia of Oklahoma History and Culture, https://www.okhistory.org/publications/enc/entry.php?entry=WA012.