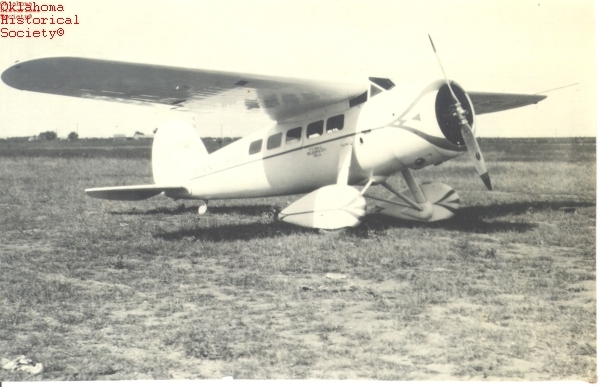 The Winnie Mae was purchased for twenty-two thousand dollars in June 1930 by oilman Florence C. ("F. C.") Hall of Chickasha and was named for his daughter. Two months later Wiley Post, Hall's personal pilot, utilized the plane to win a Los Angeles-to-Chicago air race. In June 1931 Post, accompanied by navigator Harold Gatty, piloted the Winnie Mae around the world in a record eight days, fifteen hours, and fifty-one minutes. Post subsequently acquired the airplane from Hall and flew it solo around the world in July 1933. His time was seven days, eighteen hours, and forty-nine and one-half minutes.

Post used the Winnie Mae to conduct high-altitude flights beginning in 1934. Since its construction prohibited cabin pressurization, he developed the first pressurized flight suit. On December 7, 1934, Post set an unofficial record by flying the craft to an estimated fifty thousand feet above Bartlesville. After four unsuccessful transcontinental flights through the substratosphere, the airplane was retired. Post's widow sold the Winnie Mae and its original instruments to the Smithsonian Institution in August 1935. At the beginning of the twenty-first century the Winnie Mae was on permanent exhibit at the Smithsonian's Udvar-Hazy Center at Washington Dulles International Airport in Chantilly, Virginia.

Bob Burke, From Oklahoma to Eternity: The Life of Wiley Post and the Winnie Mae (Oklahoma City: Oklahoma Heritage Association, 1998).

The following (as per The Chicago Manual of Style, 17th edition) is the preferred citation for articles:
Jon D. May, “Winnie Mae,” The Encyclopedia of Oklahoma History and Culture, https://www.okhistory.org/publications/enc/entry?entry=WI030.