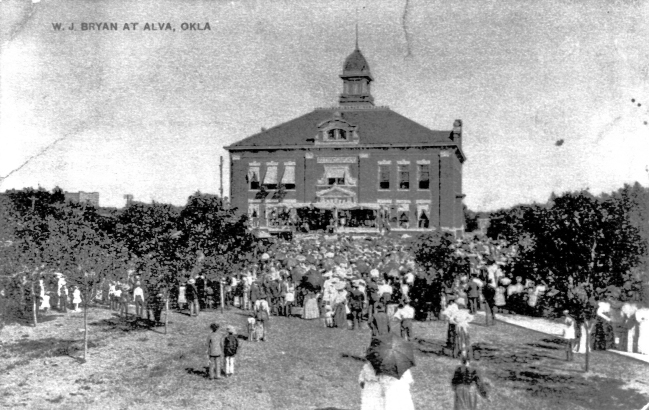 Woods County is located in northwestern Oklahoma. Harper and Woodward counties adjoin it on the west, Major County is on its southern border, and Alfalfa County lies to its east. The Kansas counties of Barber and Comanche border it on the north. The county encompasses a total land and water area of 1,290.07 square miles. Woods County is drained from the northwest to the southeast by the Cimarron River and the Salt Fork of the Arkansas River and their tributaries. The Gypsum Hills of Barber County, Kansas, extend southward into the western part of the county. In 2010 the incorporated towns included Alva (the county seat), Capron, Dacoma, Freedom, and Waynoka.

Archaeological investigations in Woods County over the past several decades reveal a long history of human use. It has been suggested that the Burnham Site could be older than the normal dates of Paleo-Indian occupation (prior to 6000 B.C.). Of the more than four dozen other sites examined, fourteen are within the Archaic (6000 B.C. to A.D. 1) period, four are Woodland (A.D. 1 to 1000), and fifteen are Plains Village (A.D. 1000 to 1500).

In 1811 the first American to explore the area was George C. Sibley, who visited the saline north of present Freedom on the Cimarron River. Sibley then followed the Mountain Fork of the Arkansas River southeast to the Great Salt Plains east of Cherokee. Later, Nathan Boone explored western Woods County in 1843. Boone kept the Cimarron River on his right as he moved toward the southeast. He spent July 4 near the source of Eagle Chief Creek west of Avard and camped the night of July 5 near Galena in the southeastern corner of the county. The next day he crossed the Cimarron and left the area. Cattle ranching was important in this part of the Cherokee Outlet, which became a pathway for Texas drovers. Beginning at Dover, the Dodge City and Red Fork Trail, a branch of the Chisholm Trail, paralleled the north bank of the Cimarron. Following a northwesterly course, the trail crossed the southern and western sides of the county.

The lands acquired by the congressional acts of March 2, 1889, March 3, 1891, and March 3, 1893, were divided into counties by the secretary of the interior, as required by section 10 of the March 1893 act before opening them to settlement. Thus, officials in the nation's capital formed Woods County as M County prior to the opening of the Cherokee Outlet. M County's name was changed to Woods by popular vote on November 6, 1894. The Democrats submitted the name "Banner," claiming that it was the banner county of the territory. The Republicans proposed "Flynn" to honor the territory's Congressional Delegate Dennis T. Flynn. The Populists advocated "Wood" to honor Sam Wood, a renowned Kansas Populist. However, Wood's name appeared as Woods on the ballot, and the secretary of the election committee misidentified Wood as Woods in his election report. The full committee also failed to notice the error before the report was published, and meeting later, they "decided to keep the s for euphony sake."

The division of large counties and location of county seats were divisive issues at the state's 1906 Constitutional Convention. Woods County had elected four Democratic delegates to the convention on a platform against changing county lines or county seats unless the changes were approved by a vote of the people. However, John C. Major, District 7 delegate, opened the county division issue by introducing Proposition 138 on December 4, 1906. The proposition called for changing county lines and the location of county seats. Ultimately, the convention created Major and Alfalfa counties out of the southern and eastern sections of Woods County and transferred to Woods County a portion of Woodward County north of the Cimarron.

Agriculture, supplemented by oil and gas production, provides the county's economic base, and wheat and cattle, have been the major sources of revenue for the county's farmers. Farmers supplied 569 train carloads of wheat for shipment from Alva in 1898. They harvested 3.651 million bushels of wheat with a value of $5.11 million in 1945. The value of other small grains harvested in 1945 was $284,884. In 1959 the county ranked thirty-two among the one hundred highest wheat-producing counties in the nation with 4.09 million bushels. Wheat production increased to 5.48 million bushels in 1992. In 1997, 705 farms involved 804,637 acres in cultivation.

A network of railroad lines made possible the transportation of crops and other agricultural products to faraway markets. In 1886–87 the Southern Kansas Railway constructed a line from Kiowa, Kansas, through future Woods County and on to Texas. The Choctaw Northern, building north through Alfalfa County in 1901, placed a spur line west from Ingersoll to Alva. The Arkansas Valley and Western (part of the St. Louis and San Francisco system) connected Enid, in Garfield County, with Dacoma and Avard in Woods County in 1904–05. In 1919–20 the Buffalo and Northwestern Railroad built from Buffalo to Waynoka. In 1898 the county's farmers shipped thirty-nine carloads of cattle from Alva. The livestock and livestock products produced by county farmers had a market value of $2.95 million in 1945, and they owned 105,000 cattle and calves at the end of 1990. By 2000, only the Burlington Northern–Santa Fe provided rail service. Two national highways, U.S. 281 and U.S. 64, intersect in Alva.

Two museums, the Cherokee Strip Museum and the Northwestern Museum of Natural History, are located in Alva. A railroad museum is located in Waynoka and a western history museum is located in Freedom. Little Sahara State Park is located on the north bank of the Cimarron near Waynoka. Eleven properties listed in the National Register of Historic Places include seven territorial-era buildings in downtown Alva, as well as Science Hall on the university campus (NR 83002141) and the Waynoka Santa Fe Depot (NR 74001671).

Gen. Hugh S. Johnson, an 1897 Alva High School graduate, was in charge of World War I's Selective Service System and in the 1930s directed Pres. Franklin D. Roosevelt's National Recovery Administration. Roy Dunn, a 1931 Northwestern graduate from Gate, Oklahoma, represented the United States as a heavyweight wrestler in the 1936 Olympic Games in Berlin. Jesse Dunn, an Alva attorney, was elected to the Oklahoma Supreme Court in 1907.

Proceedings of the Constitutional Convention of the Proposed State of Oklahoma (Muskogee, Okla.: Muskogee Printing Co., 1907).

The following (as per The Chicago Manual of Style, 17th edition) is the preferred citation for articles:
Donovan Reichenberger, “Woods County,” The Encyclopedia of Oklahoma History and Culture, https://www.okhistory.org/publications/enc/entry.php?entry=WO014.