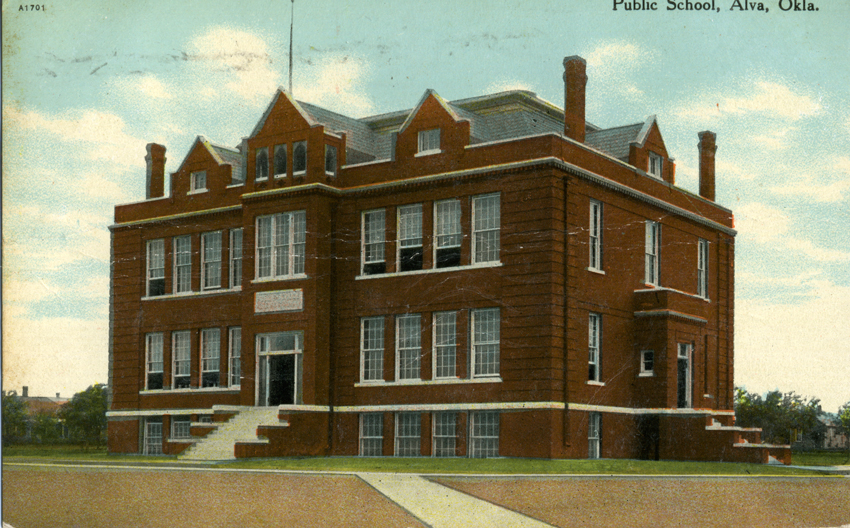 Alva, the county seat of Woods County, is located in the northeastern quadrant of the county at the intersection of U.S. Highway 64 and U.S. Highway 281. It is situated sixty-five miles northeast of Woodward, seventy-two miles northwest of Enid, and 110 miles southwest of Wichita, Kansas. Alva originated as the first railroad station southwest of Kiowa, Kansas, when the Southern Kansas Railway, later a subsidiary of the Atchison, Topeka and Santa Fe Railway, was extended from the railhead at Kiowa, Kansas, across the western end of the Cherokee Outlet to serve settlers moving into the Texas Panhandle. Construction began in fall 1886, and the extension became operational a year later on September 12, 1887. This line connecting Kiowa, Kansas, and Canadian, Texas, operated for twenty months before the opening of the Unassigned Lands to white settlers in 1889 and for six years before the opening of the Cherokee Outlet in 1893.

The secretary of the interior had selected Alva as the county seat for M (Woods) County and the location of a land office before a presidential proclamation of August 19, 1893, opened the Outlet. Consequently, the 320-acre townsite was surveyed and platted prior to the Cherokee Outlet Opening of September 16, 1893.

The town's primary economic base has been agriculture since the arrival of the first homesteaders. Early-day settlers produced a variety of crops and livestock on their 160-acre homesteads. However, by 1950 the 160-acre homesteads were being consolidated into larger farm units, and the farmers were concentrating on beef and wheat production.

The Territorial Legislature approved the establishment of the Northwestern Territorial Normal School (now Northwestern Oklahoma State University) in Alva on March 12, 1897. The first classes met in a local church on September 20, 1897, with three faculty members and fifty-eight students. In 1996 the Oklahoma Legislature established branch campuses of Northwestern in Enid and Woodward. Consequently, the university has emerged as Alva's largest employer in the 1990s.

One year after it was settled, Alva had more than 115 business establishments serving the needs of its residents and the homesteaders. One hundred years later Alva had eighty-one businesses providing employment for 853 residents. The city has a city council/statutory aldermanic type of government and is a Certified City. Alva has participated in the Oklahoma Main Street program and is the location of Charles G. "Bill" Johnson Correctional Center.

The following (as per The Chicago Manual of Style, 17th edition) is the preferred citation for articles:
Donovan Reichenberger, “Alva,” The Encyclopedia of Oklahoma History and Culture, https://www.okhistory.org/publications/enc/entry?entry=AL015.