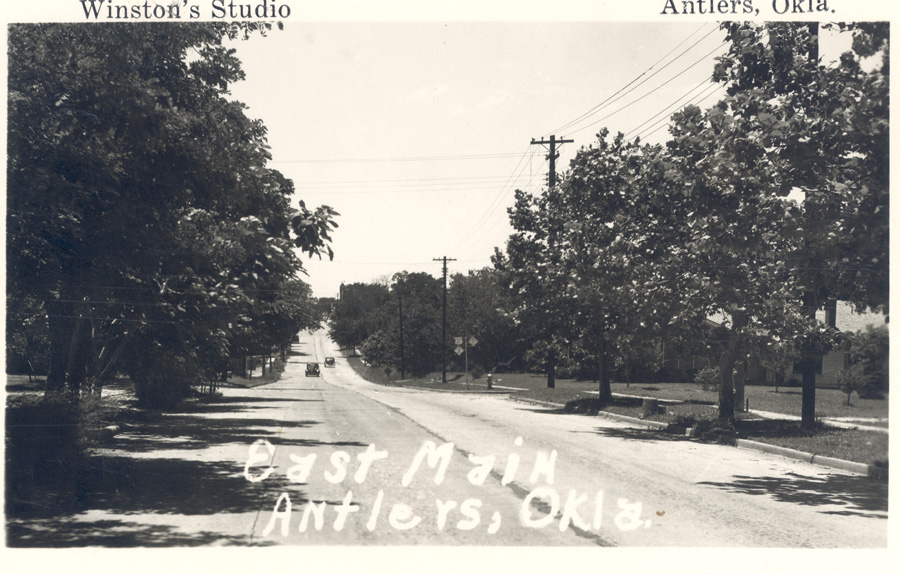 The county seat of Pushmataha County, Antlers is situated in the Kiamichi River Valley at the junction of State Highway 3 and U.S. Highway 271. Along the St. Louis and San Francisco Railway line, built in 1886–87, a post office was established at Antlers on August 26, 1887, with Ella Colbert as post office manager. Originally in the Choctaw Nation, Indian Territory, the town derived its name from the fact that antlers were fastened to a tree to mark a nearby spring. Victor M. Locke, Sr., and Maj. John G. Farr, both intermarried citizens of the Choctaw Nation, received credit for selecting the townsite along the railroad. Locke established the first mercantile business in 1886, and Farr operated a nearby sawmill in 1887. In 1897 Rev. William Henry Ketcham founded the St. Agnes Academy, which provided education for Choctaw children. In 1900 a Harvey House was opened, with a platform connecting it to the nearby railroad depot. The Antlers Frisco Depot and Antlers Spring (NR 80003298) is listed in the National Register of Historic Places.

Consisting of 182.5 acres, the townsite boundaries were determined by a Department of Interior survey accomplished in December 1900. In 1901 the Antlers Bank and Trust was organized with A. A. Lesueur as president and his daughter Octavia as cashier. The Citizens' National Bank was chartered in November 1905, and Jake Easton served as president. The town was incorporated in August 1903, and at 1907 statehood the population stood at 862. J. D. Parks was the first mayor. In 1910 the Pushmataha County commissioners bought a two-story, wood-frame building for the county courthouse. The town supported several general stores, drug stores, grocers, and the Commercial Hotel. The local agricultural and lumber industries generated the need for a cotton gin and several sawmills. Settlers established numerous churches: Methodist (1883), Baptist (1893), Catholic (1897), Christian (early 1900s), and Presbyterian (1902). Early newspapers included the Antlers American, the Antlers Democrat, and the Antlers News. The population reached 2,246 in 1930.

By the 1930s Antlers had three cotton gins and three sawmills. In 1934 construction began on a modern courthouse designed by architect Forrest Butler. On April 12, 1945, a tornado destroyed the St. Agnes Mission School, which was never rebuilt. Hundreds of homes and other buildings were also damaged or destroyed, and sixty-nine people died. News of this event was overshadowed by Pres. Franklin D. Roosevelt's death on the same day. At the turn of the twenty-first century this tornado was considered the third deadliest in Oklahoma history. A peak census count of 3,254 came in 1940, followed by a decline to 2,085 by 1960. It rose again to 2,685 in 1970 and 2,989 in 1980.

In 2000 Antlers had 2,552 residents and a council-manager form of government. Local schools provided an education from prekindergarten to high school. The economy depended on ranching, forestry, and tourism. The weekly Antlers American newspaper informed citizens. The Antlers Frisco Depot housed the Pushmataha County Historical Museum. The 2010 population stood at 2,453.

The following (as per The Chicago Manual of Style, 17th edition) is the preferred citation for articles:
Linda D. Wilson, “Antlers,” The Encyclopedia of Oklahoma History and Culture, https://www.okhistory.org/publications/enc/entry.php?entry=AN015.