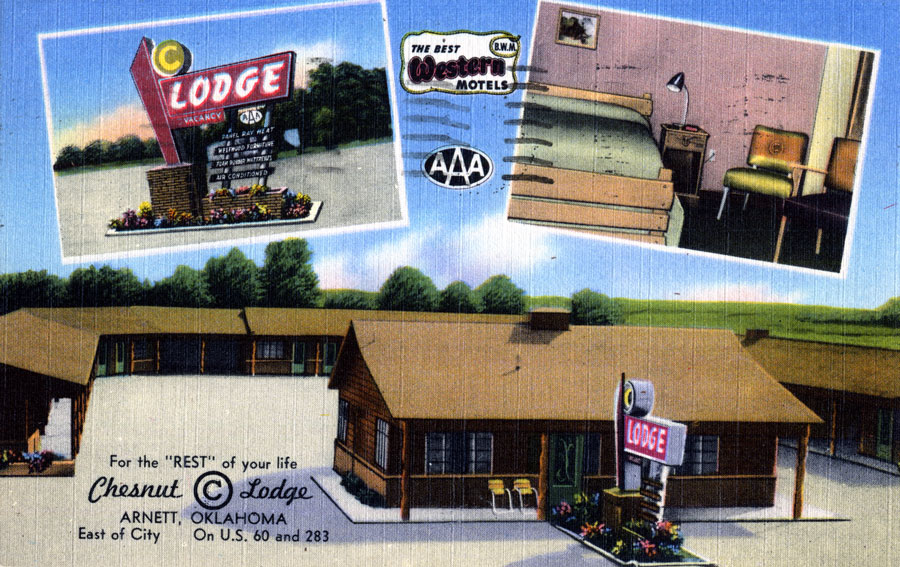 The county seat of Ellis County, one of the state's westernmost counties, Arnett lies at the junction of State Highway 46 and U.S. Highways 60/283, approximately thirty miles due southwest of Woodward. The surrounding area, within the Cheyenne and Arapaho reservation, was allotted to individual tribe members and the remainder opened by the federal government to settlement by land run in April 1892.

Arnett may owe its existence to the location of roads through the grasslands. In the 1880s a military road led southwest from Fort Supply, in the Cherokee Outlet, to Fort Elliott–Mobeetie in Texas, passing near the town's future site. That road may have branched near Arnett into a trail south to the Red River. Later, a line constructed in 1887 by the Southern Kansas Railway Company (later part of the Atchison, Topeka and Santa Fe) from Kiowa, Kansas, to Higgins, Texas, bypassed both Fort Supply, future Arnett, and Fort Elliott. At the 1892 opening Day County was created, with the new town of Grand, fourteen miles south of future Arnett, as county seat.

After the land opening Arnett gradually emerged as a way station for people and agricultural products en route to and from railroad depots thirteen miles north at Gage and fourteen miles west at Higgins, or to the county offices at Grand. After a settlement coalesced circa 1900 around a store near the A. L. Collins homestead, a post office was designated for Arnett in June 1902 with William Brown as postmaster. A few miles away a settlement called Craft had emerged and after losing its post office in 1906, lost its businesses and residents to Arnett. A group of local residents formed a townsite company in early 1907 and platted 140 acres of business and residential lots.

At 1907 statehood, when Day County was eliminated, the portion north of the Canadian River became Ellis County. Arnett lay within Ellis's boundaries, and locals wanted their town to be the new county's seat. An election held in August 1908 between Gage, Shattuck, and Arnett resulted in a runoff, and Shattuck lost to Arnett. A frame building served as a courthouse, replaced in 1912 by a new brick building on the town square. By that time Arnett had developed three churches, a school, and businesses, including two hotels, six stores, and the Farmers' and Merchants' Bank. A large wagonyard served travelers. Incorporated in 1909, the town reached a population of 511 in 1910. As transportation remained a problem, in 1908–09 local residents, including O. E. Null and M. F. Hood, combined with Texans from Dalhart and Higgins to form the Mountain Valley and Plains Railroad Company. Their planned line from Dalhart through Higgins, Arnett, and Kingfisher to Oklahoma City never materialized. Arnett continued to lack a rail connection, and a stage line took people to and from the train at Gage.

Nevertheless, the town prospered, and as with most county seats, businesses multiplied. Title abstractors and lawyers kept offices there. Another bank and two real estate/loan shops opened, and two weekly newspapers emerged, the Ellis County Capital and the Arnett Leader. Hardware and general stores, groceries, feed dealers, a gristmill, a feed mill, and blacksmiths operated in the pre–World War I years. As Arnett lacked railroad access, no grain elevators, cattle yards, or other significant agricultural industries developed. Cattle were driven to Gage to be marketed in Kansas City. H. C. Walters manufactured hand-made cigars, using raw materials from Mississippi, and marketed them around the region from 1916 into 1918. Arnett's population slipped by 1920 to a low of 404 but rebounded when automobiles became the mode of travel.

By 1950 the town lay at a nexus of state and federal highways, and the population had risen to 690. In the 1950s a regional art center developed nearby under the leadership of Dord Fitz, whose parents were Ellis County natives. Having studied at the Art Institute of Chicago, Fitz had taught at Eastern Kentucky College and had chaired the University of Kentucky art department before returning to Oklahoma in 1951. He set up an art school, eventually based in Amarillo, Texas, and established art clubs, including Arnett's Sandhill Daubers, in the Texas Panhandle and adjacent Oklahoma areas. Their activities centered on the Westerner Art Center, a gallery located six miles west of Arnett.

Through the twentieth century cattle and feed crops remained the economic mainstay, joined by wheat at midcentury. Petroleum exploration began in the 1930s, and in the 1950s natural gas wells were developed nearby. During the 1950s as many as 120 dairy farms operated in the area, and the industry continued to be significant through the 1980s. The town grew slightly for two decades to 714 in 1980, slipped to 520 in the 2000 census, and grew to 524 in 2010. Local businesses concentrated on selling hardware, feed-seed, and groceries. At the end of the twentieth century Arnett continued to be a regional trade center for Ellis County farm families. The Ellis County Courthouse is listed in the National Register of Historic Places (NR 85000681).

The following (as per The Chicago Manual of Style, 17th edition) is the preferred citation for articles:
Dianna Everett, “Arnett,” The Encyclopedia of Oklahoma History and Culture, https://www.okhistory.org/publications/enc/entry.php?entry=AR015.