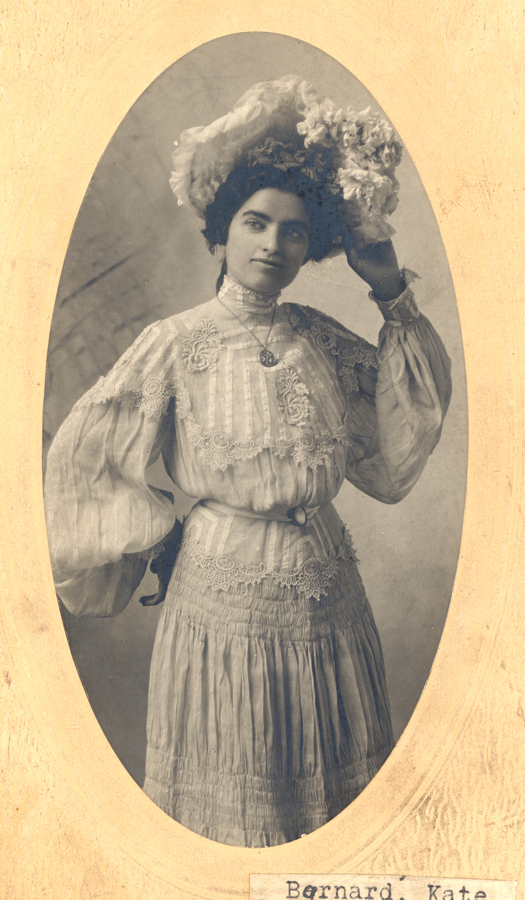 One of Oklahoma's most outstanding woman politicians, "Kate" Barnard was born Catherine Ann Barnard, in Geneva, Nebraska, on May 23, 1875, to John P. and Rachel Sheill Barnard. Shortly after her birth, her parents moved to northwestern Kansas. Her mother died two years later, and her father temporarily abandoned her to the care of relatives and neighbors. Barnard joined her father in Oklahoma City in 1891 and attended St. Joseph's Academy. She lived on her father's claim near Newalla until she moved back to Oklahoma City in 1895 to continue preparations to become a teacher. After acquiring her territorial teaching certificate, she taught in several one-room schools located within commuting distance of Oklahoma City. Tired of teaching, she enrolled in secretarial courses at a local business school. Using her Democratic Party and Catholic connections, she obtained a succession of clerical patronage positions in the territorial government.

In 1904 while serving as a hostess for the Oklahoma exhibit at the St. Louis World's Fair, Barnard noticed urban poverty and listened to discussions by social science experts who suggested solutions. Returning to Oklahoma City, she discovered that her hometown also had developed an army of indigents, so she began a career in charity work. Believing that women had political potential, especially in the area of social justice reform, she entered politics in 1906 when Oklahoma statehood was imminent. During the Constitutional Convention she convinced delegates to adopt two reform measures: the prohibition of child labor, and the establishment of the office of commissioner of charities and corrections. After the convention the Democratic Party endorsed her candidacy for the position of commissioner, and she won the office by a greater plurality than any other candidate in Oklahoma's first general election, in which women could not vote.

Triumph at the polls made Barnard the first woman elected to a major Oklahoma state office. As commissioner, she persuaded the state legislature to adopt laws requiring compulsory education, regulating child labor, and launching a juvenile justice system. Her 1908 investigation of the treatment of Oklahoma prisoners held in a Kansas prison rated national headlines and enhanced her reputation as a reformer. Her efforts resulted in the repatriation of the convicts and the subsequent creation of a three-tier state prison system consisting of a penitentiary, a reformatory, and a boys' training school. She spent much of her time supervising those facilities as well as overseeing private and public humanitarian institutions such as orphanages and insane asylums.

In 1910 she achieved reelection by a substantial margin, but her second term proved less successful. She embraced an unpopular cause, the protection of Indian orphans' property rights. In 1913 and 1914 the legislature engaged in a ferocious attack on the executive branch, and Barnard provided a target for legislative critics, who slashed her department's budget and thereby its size and effectiveness. Leaving office in 1915, Barnard continued her campaign for Indian property rights, but with little success. Poor health and depression forced her into seclusion, and she died in Oklahoma City on February 23, 1930. Although she was one of the nation's most effective social justice reformers and one of its most successful woman politicians, she did not establish enduring legacies for reform and female political activism in Oklahoma.

Linda Edmondson and Margaret Larason, "Kate Barnard: The Story of a Woman Politician," The Chronicles of Oklahoma 78 (Summer 2000).

The following (as per The Chicago Manual of Style, 17th edition) is the preferred citation for articles:
Lynn Musslewhite and Suzanne Jones Crawford, “Barnard, Catherine Ann,” The Encyclopedia of Oklahoma History and Culture, https://www.okhistory.org/publications/enc/entry.php?entry=BA020.