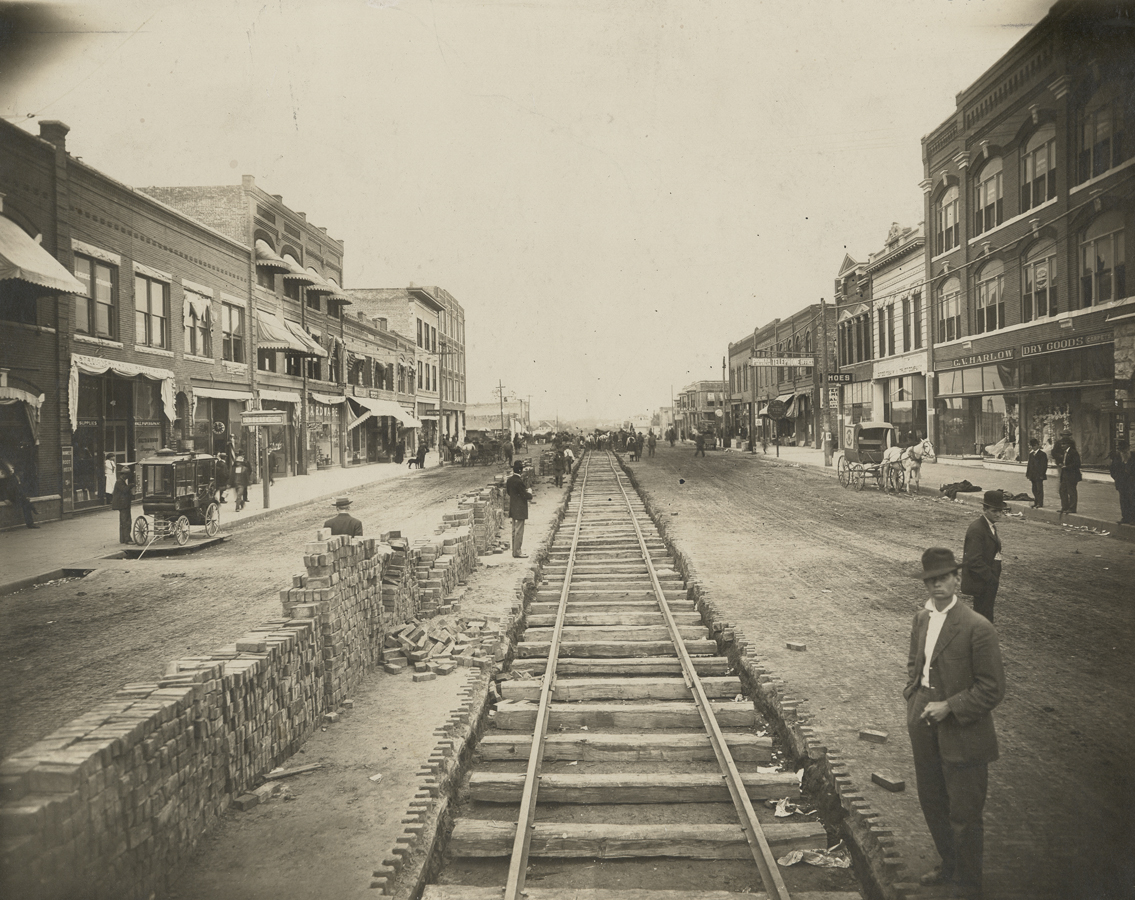 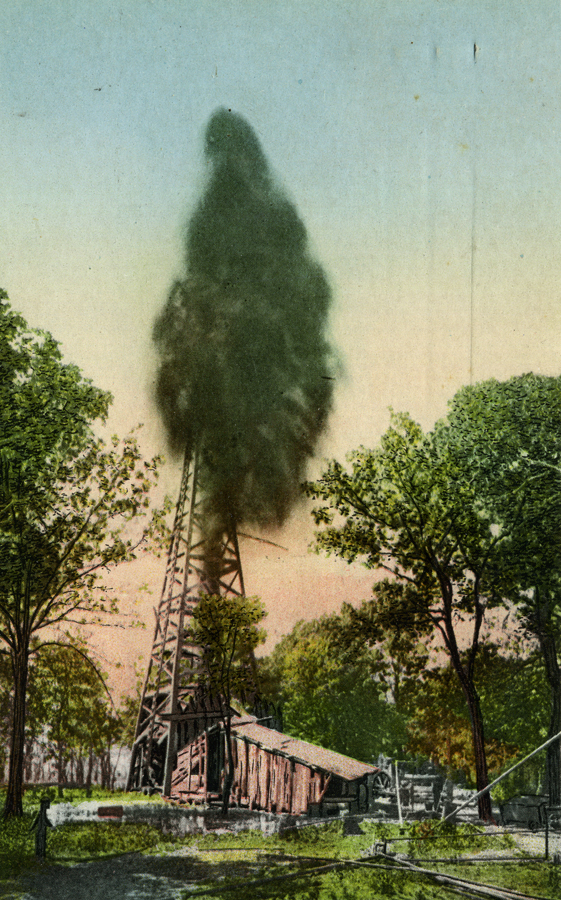 The seat of Washington County, Bartlesville was Oklahoma's first oil boomtown and a leading energy center of the twentieth century. Located in west-central Washington County, the city lies near the Washington-Osage county line, forty-seven miles north of Tulsa, and is crossed by U.S. Highways 60 and 75, State Highway 123, the South Kansas and Oklahoma Railroad, and the Caney River. In 2000 Bartlesville covered a land area of 21.105 square miles, and the 2010 census counted 35,750 residents, making it Washington County's largest and most populous community.

Bartles opened a trading post and post office on Turkey Creek in present east Bartlesville in 1874 and purchased a gristmill from Nelson F. Carr in 1875. Carr, an intermarried Cherokee and the area's earliest non-Indian resident, had built the mill along the Caney River in 1870. Bartlesville's first industry, the Carr-Bartles mill, was located in present Johnstone Park, near the State Highway 123 bridge.

Bartles modified his mill to grind flour and built an adjacent two-story general store and residence. He soon added a boarding and rooming house and a blacksmith shop and livery stable. His activities attracted others who located nearby. Bartles provided the settlement with electricity, a telephone exchange, and a water system. He moved the Turkey Creek post office there in 1880. The village thrived for about twenty-five years but never incorporated.

Residents of the Bartles community began moving south of the Caney River in 1884 when William Johnstone and George B. Keeler opened a store near the present East Hensley Boulevard–South Delaware Avenue intersection. The Weekly Magnet, the town's first newspaper, appeared in March 1895. (Bartlesville's current newspaper, the Examiner-Enterprise, debuted in 1939). Bartlesville was incorporated in January 1897, with Dr. Thomas A. Stewart as mayor. The local post office was moved from "North Bartles Town" to the Johnstone and Keeler Store in 1899.

The area west of the Johnstone and Keeler Store was surveyed and platted in 1898, and eighty acres were offered to the Atchison, Topeka and Santa Fe Railway (AT&SF) for a depot. AT&SF officials accepted the proposal, and railroad construction reached town in 1899. Jacob Bartles, his store bypassed by the route, moved his establishment five miles north and founded the town of Dewey.

Bartlesville was officially surveyed in February 1902. Townsite lots were appraised and sold, with current occupants receiving preemption rights. Missouri, Kansas and Texas Railway (MK&T) service began in 1903. The MK&T leased track between Bartlesville and Dewey from the AT&SF and used Bartlesville's AT&SF depot. Bartlesville was selected the Washington County seat at the Constitutional Convention of 1906, and work on the county courthouse began in 1913. (The original Washington County Courthouse was replaced by the present facility, a 1933 federal post office and court building, in 1972.) Local businesses circa 1907 included the Great Western Glass Company, manufacturer of Oklahoma's first glass products, and numerous petroleum industry firms.

The presence of oil near Bartlesville was noticed as early as 1875. The Nellie Johnstone Number One, Oklahoma's first commercial oil well, was drilled at Bartlesville in April 1897. Profitable development of the region's oil fields began with the arrival of the AT&SF. (AT&SF tank cars first carried oil from Bartlesville to a Neodesha, Kansas, refinery in May 1900.) The Prairie Oil and Gas Company built a pipeline loading rack at the Bartlesville depot in 1900 and laid a pipeline to oil leases in present Osage County, Oklahoma. In 1903 the Prairie Oil and Gas Company built a thirty-five-thousand-gallon oil storage tank near the Bartlesville depot, and in 1904 completed a trunk pipeline, Oklahoma's first, from Bartlesville to Humboldt, Kansas.

Surrounded by oil-field activity, Bartlesville boomed. More than sixty oil companies were based there in 1909, including the Barnsdall Oil Company and the Indian Territory Illuminating Oil Company. Such notable oilmen as Frank Phillips, L. E. Phillips, Waite Phillips, Harry F. Sinclair, and a young J. Paul Getty, whose father formed the Minnehoma Oil and Gas Company, called Bartlesville home. In 1917 Frank and L. E. Phillips incorporated the Phillips Petroleum Company. From its Bartlesville headquarters the Phillips Petroleum Company became Oklahoma's largest company and was the mainstay of the local economy into the twenty-first century. Despite its 2002 merger with Conoco, Inc., and the relocation of company headquarters to Houston, Texas, ConocoPhillips remained Bartlesville's largest employer.

Oil brought other industries to Bartlesville. During the 1920s Harold C. Price, founder of the H. C. Price Company, developed an electric welding technique for oil pipeline construction. In 1956 he commissioned architect Frank Lloyd Wright to design the company's headquarters building. The result was the Price Tower, Wright's only skyscraper. The H. C. Price Company was liquidated in 1980.

A Russian immigrant, Armais Arutunoff, who invented the submergible pump, established the Bart Manufacturing Company at Bartlesville in 1928. He later changed his company's name to the REDA (an acronym for Russian Electrical Dynamo of Arutunoff) Pump Company. As president and chair of the board, Arutunoff sold his company to TRW, Inc., in 1969. TRW REDA Pump was a major manufacturer of submergible pumps used in the petroleum industry. The firm became Schlumberger-REDA Production Systems in the late 1990s.

Bartlesville had three smelters, Lanyon-Starr, Bartlesville Zinc, and National Zinc, that opened in 1907. The natural gas–fired smelters produced more than twenty-eight tons of zinc in 1909, with peak production occurring during World War I. Bartlesville Zinc purchased Lanyon-Starr in 1915 and moved to Blackwell, Oklahoma, in the 1920s, but National Zinc remained operational until 1997. Early smelter employees lived in nearby Smelter Town, Pruneville, and other communities. Many workers were Polish, including Gus Mnich, who became a well-known local grocer.

Another ethnic family that found success in Bartlesville was the Madansky (Madanic) family. Russian Jews, the Madanskys changed their name to May. Their Madansky Clothing Company, which opened at Bartlesville in 1910, is now May Brothers Department Store. It has the distinction of being Oklahoma's oldest clothing store run by the same family at the original address.

Led by its home rule charter form of government, Bartlesville experienced renewed growth during the early twenty-first century. Jobs created by ConocoPhillips, a Wal-Mart distribution center, and other enterprises resulted in an increase in population and housing. In 2000 the Bartlesville Public School District consisted of one senior and one mid-high school, two middle schools, and seven elementary schools, with an enrollment of 6,340. Annual community events were the OK Mozart Festival, the Indian Summer Festival, the SunFest, and the Biplane Expo.

The following (as per The Chicago Manual of Style, 17th edition) is the preferred citation for articles:
Jon D. May, “Bartlesville,” The Encyclopedia of Oklahoma History and Culture, https://www.okhistory.org/publications/enc/entry?entry=BA026.