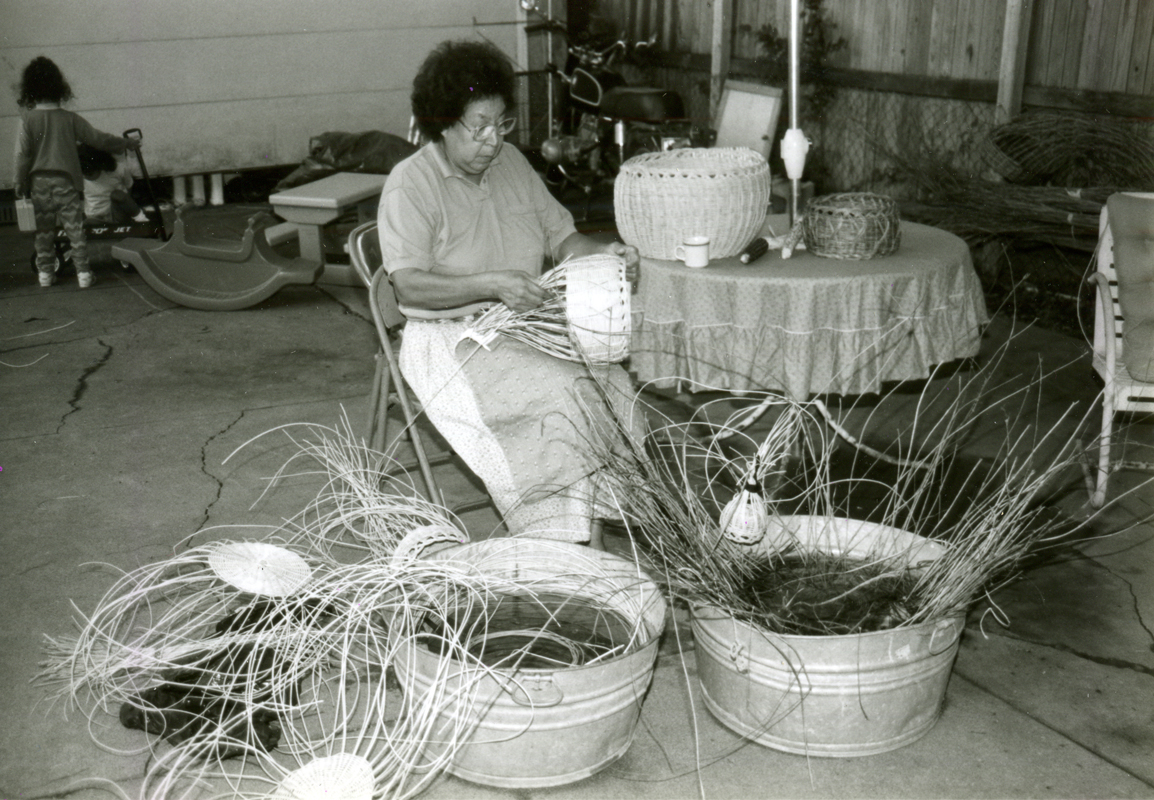 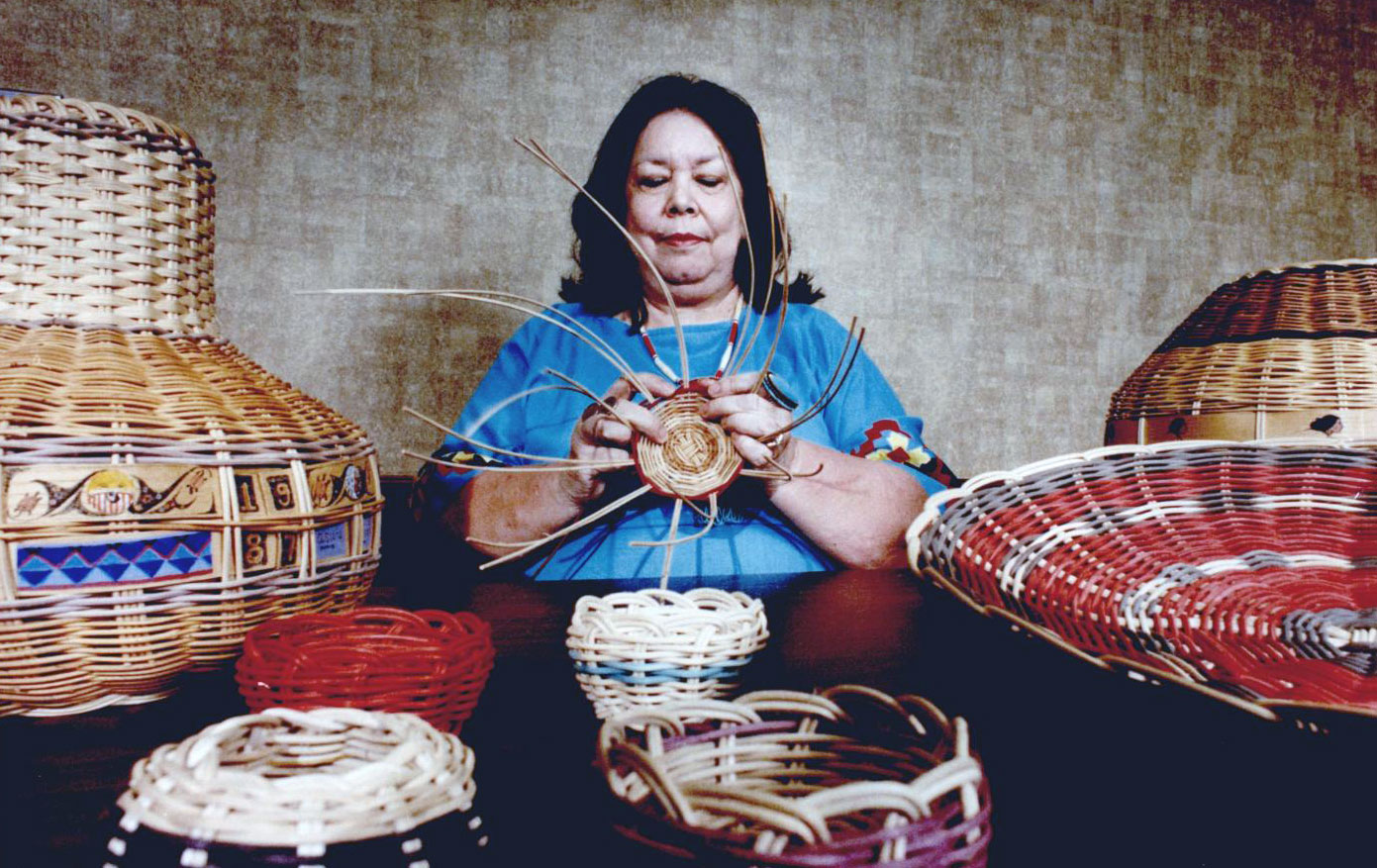 Many American Indian groups produced baskets in their traditional homelands prior to their forced removal to the Indian Territory. The Modoc, Seneca, Apache, and the tribes of the American Southeast all produced distinct basketry. Many of these peoples were unable to continue basket production when confronted with unfamiliar environments and materials in their new territories.

At the beginning of the twenty-first century basketmaking persisted in Oklahoma among several tribes from the Southeast and among the Kickapoo, whose origins lay in the northern Midwest. Resettled Southeastern tribes also had an archaeological link to Oklahoma. Creek, Cherokee, and Choctaw basketry utilize the same forms and materials found in baskets that have been recovered at archaeological sites across the South, including Oklahoma's Spiro Mounds. Plaited cane baskets and mats from Spiro Mounds cannot be linked with certainty to a particular tribe. However, this basketry is easily placed in the same Southeastern tradition. Most cane baskets woven in Oklahoma are part of the Southeastern food-processing complex that was reported by the early Europeans in North America. Traditionally dominated by a variety of tray forms and deep tray forms, this basket industry persists within Oklahoma in association with traditional foodways.

The narrow hickory splints utilized in Oklahoma Creek–made baskets clearly reflect the fact that cane did not grow in the east-central region. Similarly, the narrow range of forms encountered and documented among the Creek clearly indicates that this basketry industry has retained strong ties with traditional food processing. Basket forms among the Oklahoma Creek are primarily restricted to large trays used for winnowing parched hominy, smaller tray forms for catching and holding processed material, and sifter and sieve tray forms for sizing and separating processed foodstuffs. Decoration is rare on Creek baskets and, indeed, the presence of dyed elements in them can be considered unusual.

The Choctaw have been the most prolific cane basket weavers in the state. Cane is relatively abundant in southeastern Oklahoma, and the persistence of traditional foodways insures the continued production of tray forms associated with hominy processing. Although less common in the recent past, the distinctive open-ended winnowing tray of the Choctaw, along with the other tray forms associated with food processing, are still encountered. In addition to these traditional forms, a nominal market for Oklahoma Choctaw baskets developed in the late nineteenth century. Although the number of weavers has steadily declined, some baskets are still produced for the marketplace. There are no indications in Oklahoma that the double-walled baskets like those woven by Mississippi Choctaw were ever woven, but other forms, including bail-handled forms, heart baskets, and bullnose baskets have all been documented. Choctaw basketry decoration includes the use of dyed elements, typically red and/or black, integrated into a basket woven of narrower cane splints than used by the Mississippi Choctaw.

The dominant material in historic Eastern Cherokee baskets, cane, occurs but is not common in Oklahoma Cherokee areas. With a strong tradition of sales to Europeans, Oklahoma Cherokee continued to manufacture cane baskets. However, without a strong emphasis on everyday, traditional foodways, Cherokees never abundantly produced cane baskets. At the same time, a strong tradition of sales to non-Indians led to weaving with buckbrush, a plant found in northeastern Oklahoma. The use of buckbrush allowed the Cherokee to develop a sales-oriented basket industry that grew larger over the twentieth century. The industry includes a distinctive style of basket, a cadre of basket weavers, and an evolving region of basketmaking areas centered on several towns in eastern Oklahoma.

Cherokee artisans produce most of the American Indian basketry that is readily available at shops and festivals in Oklahoma. Weavers work almost exclusively in buckbrush and weave almost exclusively in a double-wall technique, which is also applied by the Cherokee in the eastern United States to cane basketry. Buckbrush baskets are produced in all sizes and forms. The most common are bowls, compressed jars with narrow mouths, and forms woven around glass and ceramic vessels. Cane baskets are extremely rare and are typically encountered only as antiques. Also seldom encountered are utility food-processing baskets woven in the Cherokee manner, but with narrow splints of hickory similar to those used by the Creek.

The Kickapoo are Oklahoma's only basketry-producing tribe with origins outside the American Southeast. They are best known for the production of mats, from simple, sewn mats used to cover houses to dyed, twined mats used inside the dwelling. The few baskets produced by Oklahoma Kickapoo artisans are twined baskets made of rush, as with the twined mats. Colored with commercial dyes, these baskets typically are of moderate size and have bail handles. Kickapoo baskets and mats are rarely encountered in the marketplace. Most are used by tribe members. Basketry, although documented among the Kickapoo in Oklahoma, seems to be a craft more practiced by Kickapoo residing in Mexico.

The following (as per The Chicago Manual of Style, 17th edition) is the preferred citation for articles:
Marshall Gettys, “Basketry, American Indian,” The Encyclopedia of Oklahoma History and Culture, https://www.okhistory.org/publications/enc/entry.php?entry=BA032.