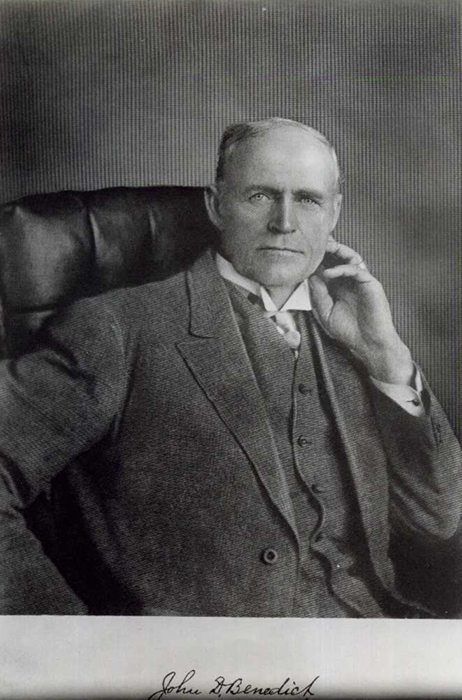 Educator and Muskogee community leader John Downing Benedict was born on May 27, 1854, in Clermont, Indiana, the son of David and Lydia Ann Downing Benedict. Educated in Indiana common schools, John Benedict attended high school in Vermilion County, Illinois, where his family had moved in 1869. There the young man taught school, attended the University of Illinois, and studied law in Illinois. As Vermilion County superintendent of schools from 1881 to 1889, Benedict pioneered work in rural school grading and helped develop a uniform course of study for the state's rural schools. Those ideas were later adopted in Kansas as well as Oklahoma and Indian territories.

In 1899 Benedict was appointed as the first U.S. superintendent of schools in I.T. When he arrived in Muskogee, I.T., he sensed resentment from tribal leaders. The Five Tribes had had complete jurisdiction over education until passage of the Curtis Act of 1898. Benedict enumerated various defects in the territory's schools, including incompetent supervision, irregular attendance, financial mismanagement, and neglect in teaching the English language. He observed that most school superintendents were tribal patronage appointees who selected unqualified teachers. Within five years Benedict reported improvements. He had gained the tribal leaders' trust, implemented a summer normal school for teachers, and administered an annual examination to retain competent teachers. School attendance had increased.

Although not officially responsible for the education of non-Indian children, Benedict became involved with their plight. Because real property in I.T. belonged to Indians, it could not be taxed for educational purposes. Further, Congress did not want to establish a precedent of funding territorial schools for noncitizens. Benedict and other territorial leaders lobbied Congress and eventually received additional money for tribal education with the proviso that it could be used for noncitizens, thus providing education for white and African American children.

After Oklahoma statehood in 1907, Gov. Charles N. Haskell appointed Benedict to the state board of education and the state textbook commission. He also continued to work with the schools located in former Indian Territory. In 1910 Benedict was suspended from his duties on a variety of charges, including conflict of interest and poor supervision of Indian schools. Although the charges were politically motivated and later dismissed, he decided not to return to his job.

He continued to live in Muskogee, working in real estate and the insurance business. In 1922 he wrote a three-volume history on Muskogee and the counties in northeastern Oklahoma. He and his wife, the former Alice Hibbard, whom he had married in 1882, were active in the community. Benedict assisted with writing Muskogee's first charter and served on the local school board. He died on January 26, 1946, in Muskogee, and was buried in Green Hill Cemetery.

The following (as per The Chicago Manual of Style, 17th edition) is the preferred citation for articles:
Carolyn G. Hanneman, “Benedict, John Downing,” The Encyclopedia of Oklahoma History and Culture, https://www.okhistory.org/publications/enc/entry.php?entry=BE016.