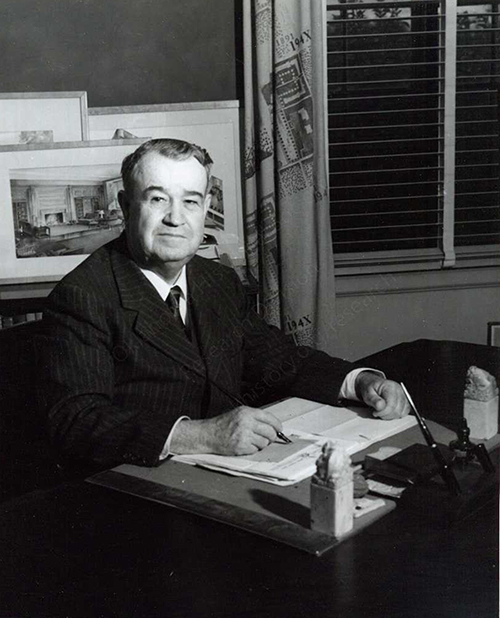 Educator Henry Garland Bennett, the son of Baptist preacher Thomas Jefferson and Mary Elizabeth Bright Bennett, was born on December 14, 1886, in Nevada County, Arkansas. After graduating from Ouachita College the younger Bennett left Arkansas to teach school at Boswell, Oklahoma, in 1908. In 1910 he secured a more prestigious position as superintendent of schools at Hugo, remaining there until he became president of Southeastern State Normal School (now Southeastern Oklahoma State University) in Durant in 1919. While working as a visiting summer professor in Durant, he met and married Vera Pearl Connell on January 29, 1913. They had five children.

After his appointment to Southeastern the Durant newspaper predicted that he would succeed because "no other man could have received the endorsement of so many people in the normal district." Years later U.S. Sen. Robert S. Kerr from Oklahoma remarked that Bennett was "a dreamer of no little dreams with the magic for transporting them into reality."

By 1921 Bennett had successfully guided Southeastern's transition from a normal school into a state teachers' college. When he assumed control, most of the faculty's credentials were inferior, and the campus consisted of a main building and a president's home. Annual regular term enrollment was fewer then five hundred students. By 1928 enrollment had tripled. Twenty-six faculty held master's degrees, and eight possessed doctorates or were doctoral candidates. The campus grew dramatically to include four educational buildings, a gymnasium, and a library. During this period Bennett managed to complete a master's degree from Oklahoma A&M College in 1924 and a doctorate from Columbia University in New York in 1928.

In 1928 Bennett was chosen as president of Oklahoma A&M College (now Oklahoma State University) in Stillwater. At that time the institution was basically a small, academically weak school. Total enrollment was less than four thousand, and the campus was valued at less than $4 million. Immediately, Bennett announced his "Twenty-five Year Plan" to transform the college. By 1951 he had facilitated the construction or renovation of dozens of buildings valued at more than $50 million, and enrollment had increased to more than twelve thousand. Academically, the school had become one of America's finest agricultural and mechanical institutions. The U.S. Department of Agriculture adopted the soil conservation program pioneered at Stillwater, and the Fire Training School was known as the "West Point of Fire Training." During World War II A&M was chosen to provide military and national defense programs for forty thousand persons. During his tenure Bennett obtained approval in 1946 to open a technical branch at Okmulgee, and academic programs at Oklahoma A&M evolved to include doctoral degrees.

Bennett's reputation grew along with the college's. In 1950 Pres. Harry S. Truman selected him to direct his Point Four Program. Given a leave of absence from Oklahoma A&M, he quickly moved Truman's program forward. Tragically, while on a program inspection tour, Bennett and his wife were killed in a plane crash near Tehran, Iran, on December 22, 1951. At the turn of the twenty-first century, the Bennett Memorial Chapel on Oklahoma State University campus and the Southeastern Oklahoma State University library stood as memorials in his honor.

The following (as per The Chicago Manual of Style, 17th edition) is the preferred citation for articles:
L. David Norris, “Bennett, Henry Garland,” The Encyclopedia of Oklahoma History and Culture, https://www.okhistory.org/publications/enc/entry.php?entry=BE018.