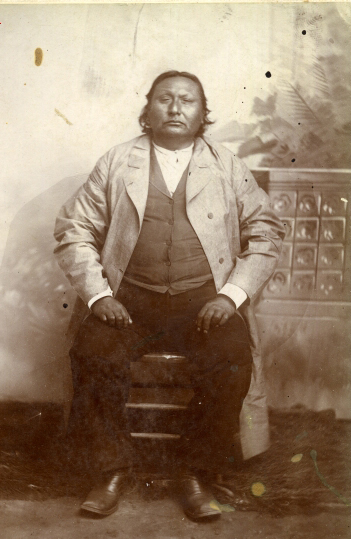 A Kiowa war chief, Big Tree (A'do-eete), was probably born circa 1850 somewhere on the plains of western Oklahoma, the Texas Panhandle, or southwestern Kansas. The Medicine Lodge Treaty of 1867 placed the Kiowa on a reservation in the Leased District of Indian Territory. From there Kiowa warriors launched raids into Texas. On May 18, 1871, Big Tree, Satank, and Satanta were among the leaders of a multitribal war party that attacked the wagon train of freighter Henry Warren in Young County, Texas, near Salt Creek.

On May 27, 1871, Big Tree was arrested at Fort Sill for his involvement in the Salt Creek Massacre, in which the wagon master and six teamsters were killed. He, Satanta, and Satank, all implicated by Satanta, were transferred to Fort Richardson at Jacksboro, Texas. There Big Tree and Satanta (Satank had been killed) became the first American Indians to be tried by a civil court and were convicted of murder. Their death sentences were commuted to life imprisonment, and they were transferred to the Texas state prison in October 1871. Removed to Fort Sill, both were paroled in October 1873.

Big Tree rejoined Kiowa raiding parties in late 1873. He surrendered at the Darlington Agency in September 1874 and was incarcerated at Fort Sill until 1875. He adopted Christianity and became a peace advocate and an assimilationist. Big Tree died at Anadarko, Oklahoma, November 13, 1929.

Charles Robinson, The Indian Trial: The Complete Story of the Warren Wagon Train Massacre and the Fall of the Kiowa Nation (Spokane, Wash.: Arthur H. Clark, 1997).

The following (as per The Chicago Manual of Style, 17th edition) is the preferred citation for articles:
Jon D. May, “Big Tree,” The Encyclopedia of Oklahoma History and Culture, https://www.okhistory.org/publications/enc/entry?entry=BI004.