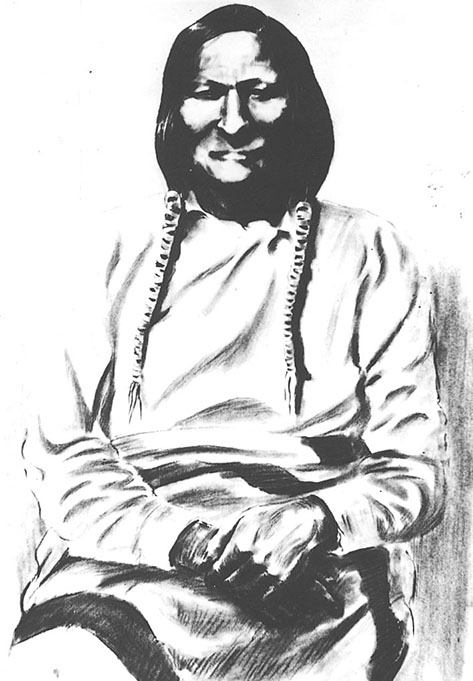 Although little is known of his early life, Black Kettle, or Moke-tavato, became a Southern Cheyenne peacemaker. He married four times and fathered at least seventeen children. He and his people lived on the vast territory in the southern plains guaranteed to them under the Fort Laramie Treaty of 1851. He earned fame on the warpath, carrying the sacred medicine arrows into battle. Once elected as a principal chief, though, he pursued diplomacy with the United States.

In 1861 Black Kettle agreed to concentrate his people near Sand Creek in Colorado through the Fort Wise Treaty. On November 29, 1864, Col. John Chivington, leader of the Third Colorado Volunteers, attacked Black Kettle's camp near Fort Lyon. Even though the chief tied an American flag along with a white banner to the end of a lodge pole and stood waving it in front of his tipi, the soldiers commenced firing. They shot one of his wives nine times. She survived, but more than two hundred Cheyenne died in the Sand Creek massacre, including women and children. In October 1865 Black Kettle accepted the Little Arkansas Treaty, which exchanged the Sand Creek reservation for land in southwestern Kansas.

Thereafter, Black Kettle consented to the move to Indian Territory in the Medicine Lodge Treaty of 1867, but his people did not receive the promised annuities of food and supplies. In 1868 Gen. Philip Sheridan ordered U.S. armed forces to undertake a winter campaign against Indians who were responsible for raids against settlers. Guided by Osage scouts, Lt. Col. George Armstrong Custer and his Seventh Cavalry followed the tracks of a Kiowa raiding party to forty-seven lodges camped on the Washita River. On November 27, 1868, Custer's troops charged into Black Kettle's village. Black Kettle and his wife, Medicine Woman, attempted to flee the Battle of the Washita, but a volley of bullets killed them. Near the site of his death, the Black Kettle Museum commemorates the peacemaker's name in present Cheyenne, Oklahoma.

Stan Hoig, The Peace Chiefs of the Cheyennes (Norman: University of Oklahoma Press, 1980).

The following (as per The Chicago Manual of Style, 17th edition) is the preferred citation for articles:
Brad D. Lookingbill, “Black Kettle,” The Encyclopedia of Oklahoma History and Culture, https://www.okhistory.org/publications/enc/entry.php?entry=BL003.