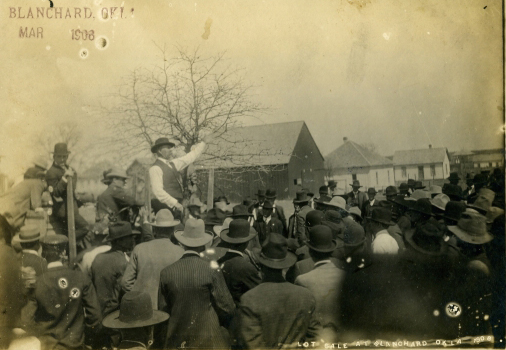 Blanchard is situated in Township 8 North, Range 4 West, Section 30 in northwestern McClain County. U.S. Highway 62 and State Highway 76 serve the town. Named after William G. "Bill" Blanchard, the community was organized originally by the Canadian Valley Construction Company, which also planned to build a railroad. However, the company went into bankruptcy, and the railroad came under the control of the Oklahoma Central Railroad, which also experienced financial problems. The Atchison, Topeka and Santa Fe Railway took over and completed the line.

The townsite was established by three lot sales beginning with the Canadian Valley Construction Company sale on September 19, 1906. The second sale was held on July 18, 1907, and final lots were sold on March 25, 1908, by the Blanchard Townsite Company. Within a year the town was described as having forty business establishments, including a state and national bank, four blacksmith shops, three livery barns, two grain elevators, and a weekly newspaper.

Several incorporation dates are reported in various publications pertaining to the history of Blanchard, and in the town offices as well. The most reliable source seems to be the Blanchard Record of October 25, 1907, which reported, "That Blanchard is now an incorporated town is realized by but a few of our citizens. The petition praying for incorporation was favorably acted upon at the [federal] courts at Chidkasha [sic] last week. On or about November 19 notice of an election of officers will be given. In the meantime candidates will be chosen."

In 1909 the Northern District Court was established whereby McClain County was divided into two sections for legal matters for the convenience of the citizens. A courthouse was built in Blanchard, and the first case began on December 13, 1909. The district was disestablished in the late 1920s and combined with District One in Purcell, the county seat. At the turn of the twenty-first century legal records could still be found at Blanchard.

The following (as per The Chicago Manual of Style, 17th edition) is the preferred citation for articles:
Joyce A. Rex, “Blanchard,” The Encyclopedia of Oklahoma History and Culture, https://www.okhistory.org/publications/enc/entry.php?entry=BL010.