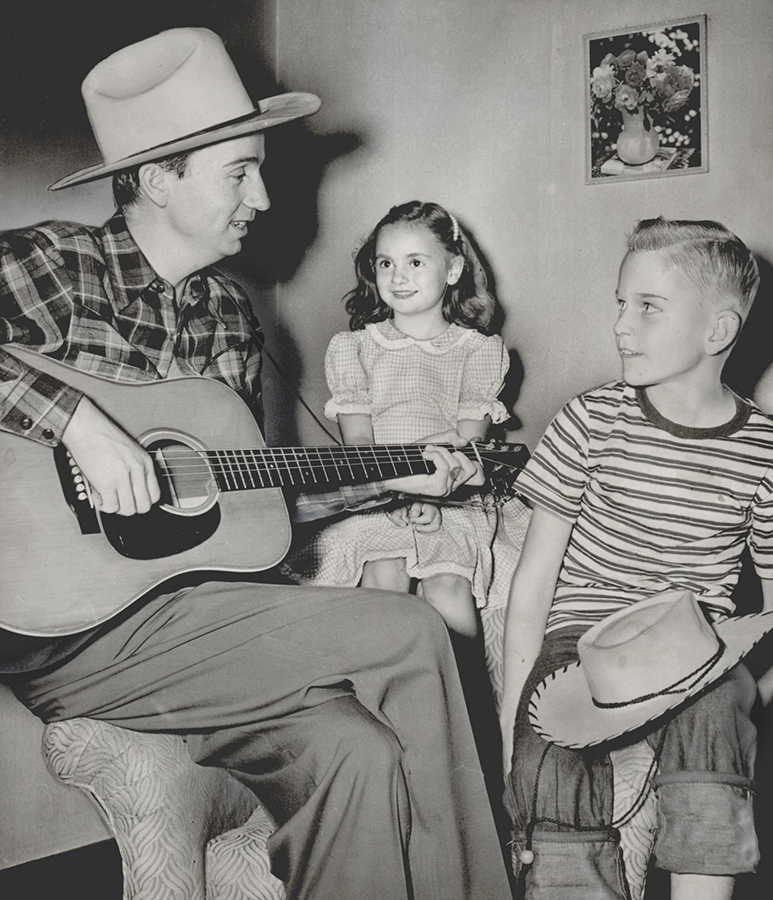 Cyrus Whitfield Bond, later known as Johnny Bond, born near Enville, Oklahoma, on June 1, 1915, lived the life of a musician, singer, comedian, actor, and writer. Reared in Marietta, Bond showcased his musical talent early by playing local dances after he taught himself to play the ukulele and guitar. After graduating from Marietta High School, he moved to Oklahoma City and began working in radio. In 1937 he joined with Jimmy Wakely and Scotty Harrel to comprise the Singing Cowboy Trio, which became the Bell Boys. The Bell Clothing Company financed the group, and their shows aired on WKY, Oklahoma City and KVOO, Tulsa. Gene Autry, impressed by their radio broadcast, told the trio, "If you boys ever get to California, look me up." In 1940 the group, with Dick Reinhart, who replaced Harrel, followed Autry to California. Billed as the Jimmy Wakely Trio, they joined Autry on his CBS radio series, The Melody Ranch Show. By 1942 the band had officially broken up, but they still continued to work together, and with Harrel, who came later, on various projects. Bond also had individual success as a singer, songwriter, and actor.

Bond signed with Columbia Records and later recorded for Autry's Republic label, Starday Records, Capitol Records, Lamb and Lion Label, and Jimmy Wakely's Shasta Label. "Cimarron," "Your Old Love Letters," "I'll Step Aside," and "Tomorrow Never Comes" were among his more popular songs. He also had success with novelty songs, which were some of the most requested at his live performances. These included "Hot Rod Lincoln," "Ten Little Bottles," and "The Morning After." Besides being a prolific songwriter who penned over four hundred songs, Bond worked in films and performed with Gene Autry. He played guitar for Autry's "Back in the Saddle Again" and "You Are My Sunshine." Bond later had a similar relationship with Tex Ritter, forming the Red River Valley Boys to back up the star. Bond appeared in thirty-eight films, mainly as a sidekick to Wakely or Ritter, or with his musical group, although he did have a supporting role in Duel in the Sun (1946), starring Gregory Peck. Beginning in 1950 he starred on the Compton (Los Angeles) Town Hall Party televised on KTTV and from 1964 to 1970 he helped develop scripts and performed in the revised Melody Ranch broadcast on Autry's television station. As an author he wrote his own autobiography as well as a biographies of Tex Ritter and Gene Autry (unpublished). Johnny Bond died in Burbank, California, on June 12, 1978.

The following (as per The Chicago Manual of Style, 17th edition) is the preferred citation for articles:
Larry O'Dell, “Bond, Cyrus Whitfield,” The Encyclopedia of Oklahoma History and Culture, https://www.okhistory.org/publications/enc/entry.php?entry=BO009.