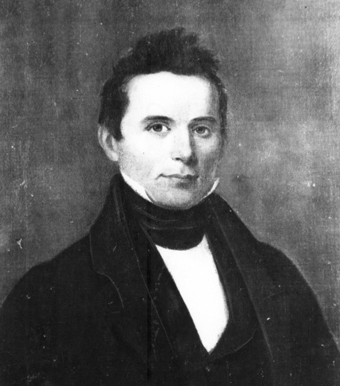 Cherokee leader and newspaper editor Elias Boudinot was born circa 1803 in an area between present Rome and Calhoun, Georgia. He was the child of Oowatie and his wife Susannah and had the given name of Galagina (The Buck) Oowatie. During his education at schools operated by missionaries, he met and took the name of a supporter of their work, Elias Boudinot. Soon after completing his schooling, he became editor of the Cherokee Phoenix. This newspaper under his editorship was influential, because it had a nationwide circulation, and in it the Cherokee defended their right to remain in their eastern homeland against the efforts of the federal and state governments to remove them to the West.

Along with his uncle Major Ridge, his cousin John Ridge, and his brother Stand Watie, Boudinot was a leader among those Cherokee who over time came to favor removal to the West, in opposition to Chief John Ross and his followers. This proremoval minority signed the Treaty of New Echota in 1835, which bound the Cherokee to move west to Indian Territory (present Oklahoma). Boudinot had resigned as Cherokee Phoenix editor in 1832. His first wife, Harriet Gold, died, and then he married Delight Sargent and moved to Park Hill in the Cherokee Nation, Indian Territory, in 1837. In 1839, after the remainder of the Cherokee had been forcibly removed to Indian Territory, on June 22 Elias Boudinot was assassinated along with John Ridge and Major Ridge for their signing of the Treaty of New Echota. Two of Boudinot's children, Elias C. Boudinot and William Penn Boudinot, also were noteworthy in Cherokee affairs.

The following (as per The Chicago Manual of Style, 17th edition) is the preferred citation for articles:
Anna Eddings, “Boudinot, Elias,” The Encyclopedia of Oklahoma History and Culture, https://www.okhistory.org/publications/enc/entry.php?entry=BO025.