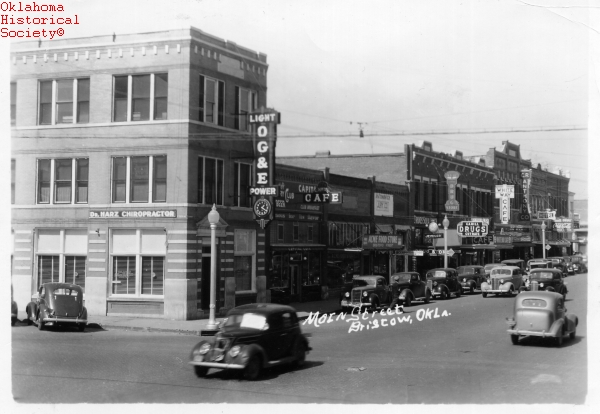 Located in central Creek County, Bristow is situated at the intersection of State Highways 16 and 48 and Historic Route 66. Locally known as "the Woodland Queen" of the Creek Nation, Indian Territory, the town developed after 1898 when the St. Louis and Oklahoma City Railroad (later the St. Louis and San Francisco Railway) built a line from Sapulpa to Oklahoma City. A trading post existed at this site prior to the town's settlement. Named in honor of U.S. Sen. Joseph L. Bristow of Kansas, a post office was established on April 25, 1898, with Charles C. Crane serving as the first postmaster. Settlers soon erected a small, wood-frame schoolhouse, and A. H. Purdy opened the first bank. The town had a population of 626 in 1900, one year before it was officially surveyed and platted.

Although designated the county seat at 1907 statehood, Sapulpa competed against Bristow for that designation in a special election held on August 12, 1908. The latter claimed the benefit of being centrally located within the county, while the former declared it had a larger population and better railroad facilities. Election results showed Sapulpa as the victor. However, Bristow residents alleged that irregularities had occurred. After an investigation, the election was voided. Another was held on November 20, 1912 and Sapulpa won again. At a special election held on March 15, 1917, Bristow voters decided to become a city of the first class.

Bristow's economy was initially impacted by the cotton industry, as indicated by the existence of seven cotton gins and two cotton-seed oil mills in the early 1900s. As part of a trade center the usual town businesses catered to local farmers, who also produced corn, peanuts, Irish potatoes, and fruits. Around 1914–15 the discovery of oil and gas in the area provided a burst of prosperity that lasted until 1925. During the peak of activity in 1920 an estimated thirty-one thousand people resided within a few miles' radius. Development of oil and gas fields created the need for a short-line railroad to connect the oil-boom towns of Nuyaka and Slick to a railhead in Bristow. The Oklahoma-Southwestern Railway built that line between 1920 and 1921. By 1930 the petroleum industry supported three oil refineries, four pipeline companies, and numerous oil and gas firms. In the 1960s other industries included the Bristow Mattress Factory, the Glassmarc Corporation (manufacturer of fiberglass boats and other items), Artemis Incorporated (manufacturer of women's garments), and the U.S. Carpet Company plant. In January 1925 one of Oklahoma's first radio stations, KFRU, went on the air from Bristow studios owned by oil millionaire E. H. Rollestone.

At the turn of the twenty-first century Bristow had a home rule charter form of town government. The town's amenities included a 320-acre city park and lake, a public swimming pool, four tennis courts, a golf course, and an airport. Residents supported two elementary schools, one middle school, and one high school as well as a public library and a hospital. The Bristow Motor Company Building (NR 95000032), the Bristow Tire Shop (NR 95000033), and the Texaco Service Station (NR 95000034) were listed in the National Register of Historic Places in 1995. Citizens preserved their local history in the Bristow Historical Society Museum, located in a restored railroad depot. The weekly Bristow News and Record Citizen newspaper informed citizens.

Philip Dickerson, History of What You Want to Know of Bristow, Indian Territory (1903; reprint, n.p., n.d.).

The following (as per The Chicago Manual of Style, 17th edition) is the preferred citation for articles:
Linda D. Wilson, “Bristow,” The Encyclopedia of Oklahoma History and Culture, https://www.okhistory.org/publications/enc/entry.php?entry=BR017.