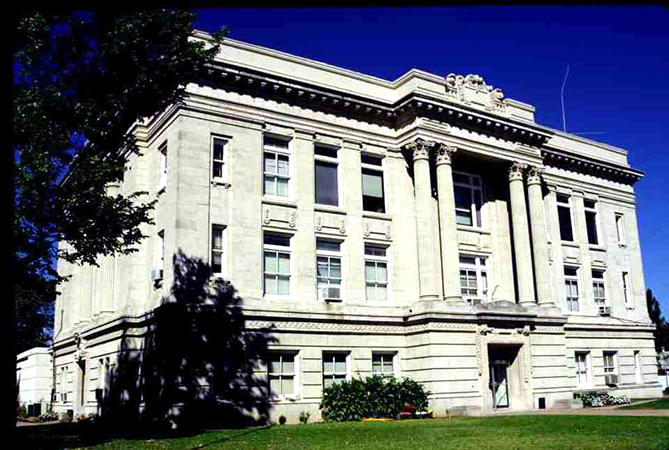 Named for Democratic presidential candidate William Jennings Bryan, a contributor to the 1907 Oklahoma Constitution, Bryan County is located in the south-central portion of the state. Bordering on the east is Choctaw County, on the north are Atoka and Johnston counties, on the west is Marshall County, and on the south is the Red River and Texas. Bryan is separated from Marshall County by the Roosevelt Bridge and Lake Texoma. Covering a total land and water area of 943.43 square miles, Bryan County lies in the Coastal Plains physiographic region, within the Red River watershed, with major drainage provided by the Blue River. The Washita River, formerly flowing north-south between Bryan and Marshall counties, is now impounded in Lake Texoma. The county is served by U.S. Highways 69/75 north-south and 70 east-west and by State Highways 22, 70E, 78, and 91. In 2010 thirteen incorporated towns existed in the county: Achille, Armstrong, Bennington, Bokchito, Caddo, Calera, Colbert, Durant (the county seat), Hendrix, Kemp, Kenefic, Mead, and Silo.

Relative to many Oklahoma counties, Bryan County has a low number of archaeological sites. The focus has been on the Archaic (6000 B.C. to A.D. 1) period, with fifty-five sites examined. By the end of the twentieth century there were three Paleo-Indian (prior to 6000 B.C.), one Woodland (A.D. 1 to 1000), and nineteen Plains Village (A.D. 1000 to 1500) sites. In 1941 University of Oklahoma archaeologists funded by the Works Projects Administration (WPA) conducted research at four Bryan County locales. The study examined small Chickasaw post-removal home sites, estimating that they were occupied between 1840 and 1850. This historic archaeology helped describe everyday details (home design, diet, and utensils) of Oklahoma's early history.

A part of both the Choctaw and Chickasaw nations after their removal from the American south, the Bryan County area was first populated in 1831–32 by Choctaws. Southern aristocrat and mixed-blood entrepreneur Robert M. Jones, one of the wealthiest men in the Choctaw nation, owned cotton plantations in the rich river bottomland. In 1845 the tribe developed Armstrong Academy for boys, northeast of Bokchito, with Ramsay D. Potts as the first superintendent. In 1852 John H. Carr organized Bloomfield Academy for Chickasaw girls, south of the later site of Achille. The western one-fourth of present Bryan County was the Chickasaw district from the time of Chickasaw removal from the South in 1837–40. The area was formally attached to the Chickasaw Nation in 1855 when the two nations were separated. During the Civil War Armstrong Academy served as Chahta Tamaha, the Choctaw capital.

Early-day United States military establishments in the county included Fort Washita, founded in 1842 by Gen. Zachary Taylor. During the Civil War, in 1862 Confederate Gen. Albert B. Pike established Fort McCulloch near Nail's Crossing on the Blue River, in the vicinity of present Kenefic, and occupied it with more than a thousand American Indian troops. No Civil War engagements occurred in Bryan County.

Bryan County lay in the middle of an important transportation corridor through nineteenth-century Indian Territory. The Butterfield Overland Mail route and stage line traversed the Choctaw Nation and passed through present Bryan County in the late 1850s along the route of the older Texas Road. Jonathan Nail's Crossing and Fisher's Station or Carriage Point, four miles west of present Durant, were two of twelve stops on the stage route. Cattle ranching assumed importance at an early date, in part because of the existing road. Chief Wilson N. Jones of Caddo, a wealthy rancher and store owner in the region, earned the name "cattle king" of the Choctaw Nation. Joel Nail, an enterprising rancher, began trail drives along the first cattle trail across the Indian nations, the East Shawnee Trail, which followed the northward route of the Texas Road. In addition, after the Civil War cattle herds coming up from Texas crossed the Red River at Colbert's Ferry, proceeded to Boggy Depot, and went north to Kansas and Sedalia, Missouri.

The Choctaw, committed to schools and churches within their nation, began Oklahoma Presbyterian College in Durant. Ebenezer Hotchkin, son of an early missionary, became president of the college. At the beginning of the twenty-first century it served as the Choctaw National headquarters. In 1909 William A. Durant, sergeant-at-arms at the 1906 Constitutional Convention and later speaker of the Oklahoma House of Representatives, sponsored a bill that located Southeastern Normal School, the first state institution of higher learning in Indian Territory, at Durant.

Several towns sprang into existence with the arrival of the first north-south railroad, the Missouri Kansas and Texas Railway (MK&T, or Katy), in 1872. Choctaw and white businessmen built the towns of Caddo, Durant, Calera, and Colbert, near the former Colbert's Ferry crossing on the Red River, to serve the train traffic. Caddo was the county seat of Blue County, Choctaw Nation, and the largest town until the railroads appeared. An east-west line constructed in 1902–03 by the St. Louis, San Francisco and New Orleans Railroad (later part of the St. Louis and San Francisco Railway, or Frisco line) led to the establishment of stations at Blue, Bokchito, and Bennington. At 1907 statehood Bryan County was created with Durant as its seat.

Agriculture has played an important role in the county's development. As in many areas of early Oklahoma, cotton served as a major cash crop in Bryan County, but in 1927, after boll weevils destroyed most of the cotton, the county's farmers became an early proponent of diversification. In the 1920s peanuts emerged as a significant crop. In 1997 the county placed second in Oklahoma for its peanut production and seventy-ninth in the United States. That same year Bryan County's pecan harvest ranked seventh in Oklahoma and sixty-second in the nation. The county also produces cotton, strawberries, sorghum, wheat, and other commercially viable products. The cattle industry also serves as an important economic role. In 1997 the county placed third in Oklahoma and sixty-sixth in the United States in beef cattle. The county also produces oil and gas and crushed stone. Business and industry has remained on a relatively small scale (585 establishments in 2001), compared to Oklahoma (21,258 establishments) or Tulsa (18,260) counties.

Bryan County's proximity to Texas has created controversy as well as economic opportunity for local businesses. In 1931 Gov. William H. Murray forced the opening of a free bridge across the Red River in the publicized "Red River Bridge War." During World War II German prisoners of war built Denison Dam across the Red River, and the resulting Lake Texoma created a tourist industry. The lake serves as source of attraction for striped bass ("striper") fishing enthusiasts from around the nation. Near the town of Cartwright, located at the north end of Denison Dam, is Burns Run, an attraction of rides, fast food services, and beach area that was generally frequented by Texans and by personnel from Perrin Army Air Field (later Perrin Air Force Base) in Sherman, Texas. "Beer joints" proliferated in Cartwright and Colbert, because the Texas side of the river prohibited alcohol sales until the 1970s. As Oklahoma had no waiting period for prospective marriage, Durant, only sixteen miles from Texas and accessible on U.S. Highway 69/75, emerged as a marriage mill in the 1950s. Marriage licenses often averaged two hundred per month, and the trend continued even into the 1960s. Brides included well-known figures Rosemary Clooney and Marina Oswald.

Prominent political leaders from Bryan County have included Durant's Robert L. Williams, the "war governor" who served from 1915 to 1919, Cowboy Pink Williams, lieutenant governor from Caddo, and U.S. Rep. Wes Watkins from Bennington. In its heyday the famous and infamous frequented the four-story Bryan Hotel in Durant, built in 1929. In the 1930s the hotel housed such notables as Roy Acuff, Charles "Pretty Boy" Floyd, and Pinky Tomlin, composer of the popular tune "The Object of My Affection." Gene Autry, cowboy actor and singer, worked as a telegrapher for the railroad for a time at Achille.

The following (as per The Chicago Manual of Style, 17th edition) is the preferred citation for articles:
James C. Milligan, “Bryan County,” The Encyclopedia of Oklahoma History and Culture, https://www.okhistory.org/publications/enc/entry.php?entry=BR028.