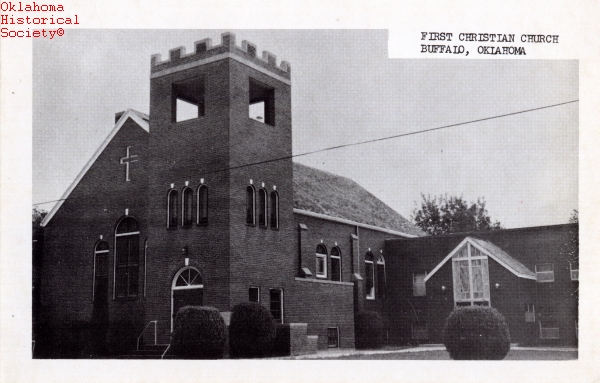 The town of Buffalo serves as the county seat of Harper County in the northwestern corner of Oklahoma at the Panhandle's eastern entrance. Buffalo is located on U.S. Highway 183/64, twelve miles south of the Kansas state line, thirty miles northeast of the Texas state line, and 174 miles northwest of Oklahoma City. Town boundaries were staked out in the valley of Buffalo Creek, from which the community derived its name, and a post office was established on June 6, 1907. During the years of the cattle drives, thousands of head of cattle were herded along the Western Trail, which ran west of present Buffalo. In addition, countless soldiers moved through the area along a military trail that extended north from Fort Supply to Fort Dodge, Kansas.

Buffalo and the surrounding region have had a lengthy ownership record of historical significance, being part of the Louisiana Purchase of 1803. Its boundaries included the Cherokee Outlet from 1835 until 1890 when Oklahoma Territory received its designation. On September 16, 1893, thousands of settlers participated in the now-famous Cherokee Outlet Opening. Following an election held on June 9, 1908, Buffalo won the title of county seat for the 1,041 square miles of Harper County, Oklahoma. The town was incorporated on July 8 of that year.

When downtown businesses were in the process of being constructed, Buffalo's founders issued instructions for all buildings to be built of stone, thereby lessening the dangers of ever-threatening prairie fires. As a result, many of those structures survived the test of time and remain as testimony of pioneer prudence. Among the town's six properties listed in the National Register of Historic Places are the Harper County Courthouse (NR 84003041), completed in 1927, and the IOOF Building of Buffalo (NR 83002087). The Buffalo and Northwestern Railroad (purchased by the Atchison, Topeka and Santa Fe Railway in July 1920) reached town in May 1920.

Buffalo remains the primary service center for a wide area of ranches and farms. Harper County Community hospital has provided residents with medical treatment. The Harper County Journal, consolidated from the Buffalo Republican and the Harper County Democrat, has been published weekly since 1924 (other early newspapers included the Buffalo News, the Buffalo Bugle, the Buffalo Republican and the Post). Air access is available at a municipal airport that has a four-thousand-foot runway, and the community's governmental body and chamber of commerce meet monthly. The Buffalo Museum displays local artifacts, and the Page Soddy (NR 83002089), a typical Great Plains–style sod house, is located southeast of town.

The following (as per The Chicago Manual of Style, 17th edition) is the preferred citation for articles:
Maxine Bamburg, “Buffalo,” The Encyclopedia of Oklahoma History and Culture, https://www.okhistory.org/publications/enc/entry.php?entry=BU004.