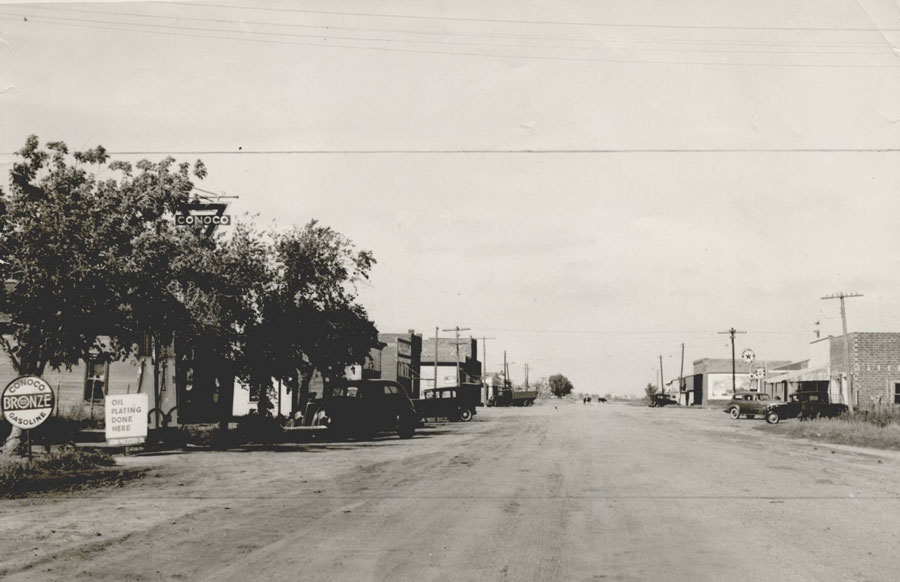 Originally in Woods County but since 1907 statehood in the north-central section of Alfalfa County, the small community of Byron lies on State Highways 8 and 11. In April 1898 V. C. Spurrier applied for and received a postal designation of Byron (named apparently for his relative, who owned a store there), and a rural community soon coalesced. By 1898 Byron was listed in a state gazetteer; however, having no rail access, the settlement only slowly developed. In April 1901 W. C. Edwards bought land for a new townsite about one mile south and one-half mile east of the original settlement. The business buildings were moved from the old to the new site, and by mid-May a new bank, meat market, and lumberyard had opened. In April 1902 the town of Byron was granted incorporation by the Woods County commission, and in October a grain elevator was constructed, anticipating the arrival of the Kansas City, Mexico and Orient line that ran south from Kansas through the county. When the line was completed to Byron on October 21, the town celebrated with a huge bonfire, and the railroad laborers were treated to lemonade, cigars, and locally grown apples.

After the railroad arrived, Byron boomed. By 1909 its population had peaked at 286. They attended Christian and Methodist churches, kept money in the Byron State Bank, and read the Byron Republican newspaper. The Byron Promoter also published in the early decades of the century. Businesses of the usual types for a small agricultural center's retail-industrial district included two hardware stores, three general stores, a blacksmith, and a flour mill. Early residents enjoyed a skating rink. Wheat and alfalfa were the major products of the nearby farms. By 1920, 249 people called the community home, and the numbers and types of businesses remained consistent. During these years, Byron was an important market and shipping point for grain and livestock in the area between Cherokee, to the south, and Anthony, Kansas, to the north.

After that, however, Byron began a slow decline as agricultural prices dropped and the Great Depression of the 1930s took its toll. The 1930 census counted 197 inhabitants. A political development in 1935 brought Byron into the news: Five women unseated five men for places on the town board. The new trustees paid off all of the town's bonded indebtedness and produced income by selling electricity to the residents. The railroad abandoned its line in 1942. In the 1940s and 1950s only a half-dozen businesses still operated, including one of the state's four warm-water fish hatcheries. Established in 1929 to produce sport fish for state lakes, and eligible farm ponds and annually producing in excess of twenty-five million fish, it is the state's only jar culture hatchery. Adjacent is a twenty-acre Watchable Wildlife Area popular with birders and naturalists.

Declining rural population prompted the consolidation of Byron's schools with those of Burlington and Driftwood in the 1960s. The population dropped to 131 in 1950, 72 in 1970, and 57 in 1990. Byron ended the twentieth century with a population of 45. More than half of the employed residents commuted to work in other towns. The U.S. Census counted 35 living there in 2010.

The following (as per The Chicago Manual of Style, 17th edition) is the preferred citation for articles:
Dianna Everett, “Byron,” The Encyclopedia of Oklahoma History and Culture, https://www.okhistory.org/publications/enc/entry.php?entry=BY004.